CPU Failing at Prime Number And Math, Is it causing other crashes?

My problem started to arise about 3 weeks ago where I started to notice that various games would crash without reason(Hard crashing during loading, graphical crashes in D2, ect), at first I believed this was due to the GPU, but after fairly extensive investigation I believe it is due to a CPU bottleneck. My specs are below and it is to my knowledge that if my machine was running fine there would be no problem. That being said, the only tangible "proof" i have that something is wrong besides symptoms, is that my CPU is failing the "Prime Number and Math" tests using the intel diagnostic tool. Let it be known that I have painstakingly tested my ram, and updates virtually everything from my Bios, to my Audio Drivers to see if it was a software problem and it does not seem to be. On a side note, My CPU seems to be benching relatively fine using CPU-Z,

I would just like any insight as to what might be causing my problems and possibly how to fix it, and are my suspicions correct that perhaps I have a faulty CPU hardware wise

Please make sure to select your country or region and to contact us within your local business Support hours. Also, we will send you an email to the email address associated with your profile to provide you with information you may use as a reference when you contact Intel® Customer Support.

Thank you for all your efforts in this matter.

In order to check this further, could you please provide us with the following information?

1- Please elaborate more when you said "performed extensive investigation". What specific steps were taken to troubleshoot this issue?

2- Was the processor purchased less than 30 days ago?

3- Is there any sign of physical damage on the processor?

4- Did you overclock the processor?

5- Did you enable Intel® Extreme Memory Profile (Intel® XMP) and if yes, what was the memory speed configured?

6- Are the crashes occurring only with games or with any other type of workload? Is it happening with all the games or with specific games? Please provide examples of the apps/games that experience this issue.

7- When the crashes occur, is there any error message or error code? Since the machine was working fine, was there any recent hardware or software changes (Windows, Driver, Software, or BIOS updates) that may relate to the point when the issue started?

To upload and attach a file, use the "Drag and drop here or browse files to attach" option below the response textbox.

When it came to investigating the issue, I have run numerous tests such as the Intel Processor Diagnostic Tool, Memtest, Burn it in, and Monitored when the crashes and etc happened using Msi AfterBurner, task manager, Cpu-x, etc.  When it comes to troubleshooting, I have performed innumerable driver updates, including uninstalling and reinstalling GPU drivers using DDU, Bios/ME updates, updating both windows and all related windows optional updates, all in hopes to rule out it being a software issue, in other words, I can only imagine that every possible driver in my machine at the time of writing this is updated to the latest version. In addition to this, I have looked through all my configs to make sure nothing was being over/underclocked, and everything was, to my knowledge, running as suggested, made sure my ram was not being taken up due to a memory leak or to standby ram as many experiencing similar issues often are. Other presumably useful information for you would be that I have installed(after the problems started arising) Intel Optane storage, Geforce control panel, Aorus Engine( I have a Gigabyte 3080ti) Rammap and various other programs aimed at finding, diagnosing and or remedying my computers ailments. In addition to this, after running other more Extensive Tests, it seems that I am consecutively running into Incorrect PrimeNumber + 128bit Floating Point Addition problems.

In regards to when I purchased the processor, it was roughly November-esc last year, I was only able to get my hands on a RTX-30 series rather recently, and shortly after I started to experience problems. I can only imagine that this is due to the fact that the CPU is bottlenecking my current Gpu, but was sufficient enough to provide with the less powerful 1060, this being said, I do recall having increasingly common problems after upgrading my processor, prior to me getting my RTX and am now wondering if that was due to the same reasons as now.

No there does not seem to be any physical damage to the card.

No, I tend the shy away from tampering with any of my core components' built in limits.

I do not believe I have, it would only be enabled if it came pre-enabled in bios/processor settings.

It is most often happening with games, however I can recall a time or two where Discord and PrusaSlicer would either crash or in Prusa's case, experience debilitating lag.

When the Crashes occur, I will often go to check event viewer to find any errors associated with the crash, most of the time all I can find is a Application Error. No other errors seem to be coinciding within even minutes of the crash/performace hinderance. I have spent ample time thinking back to when I started noticing the errors, crashes, etc, and to my knowledge nothing was undergone(updates, etc) during that time-frame, my suspicion, founded on how my computer has been handling itself in the recent weeks is that I believe that these problems have been exponentially growing over time and finally reached the point where I had noticed them en mass recently, as I have begun to use the computer for gaming again rather recently.

Thank you very much for your response and for all these details.

Please allow us to take a look into this and we will be posting back in the thread as soon as more information is available.

Thank you for your patience in this matter.

In regards to this behavior, could you please try the following steps and provide us with details?

1- Test the system using only the Intel® integrated graphics. You will need to disable or remove the discrete video card NVIDIA*. For proper assistance with this step, please contact your computer manufacturer (OEM).

3- Based on the Product Specifications for Intel® Core™ i9-10850K Processor, it supports memory RAM

4- Is Intel® Turbo Boost Technology enabled in the BIOS?

5- A screenshot of the Windows* Task Manager under the Performance tab showing all cores when gaming.

Here is the IXTU's Results, with only the integrated 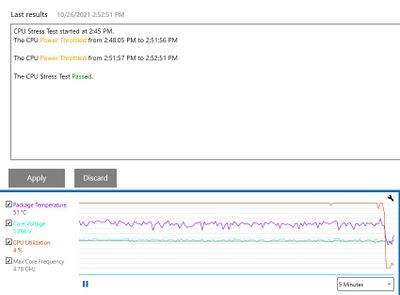 Same here, but the IPDT's results, seems to come back the same as before 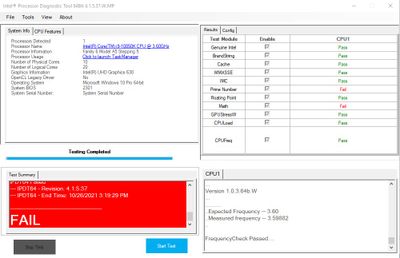 Note; all of these are with the ram's speed set to 2933MHz

And yes, turbo boost is now enabled, however as I do recall I had activated it recently when first trying to remedy my problems so I suspect it is neither a cause, nor solution to my problem sadly.

The Following are screenshots of task manager when a crash was experienced, note it seems that when a crash occurs the CPU usage seems to drop, and the GPU's usage spike. One will show start and beginning lines for when the game was started to when it crashed. 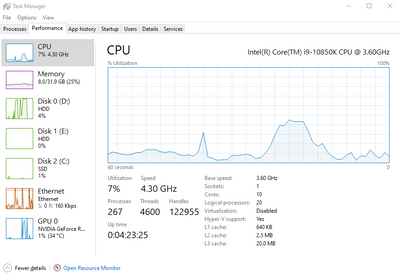 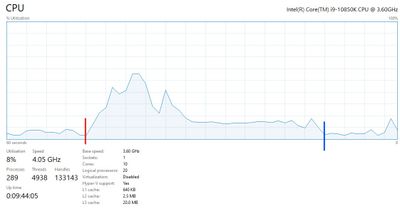 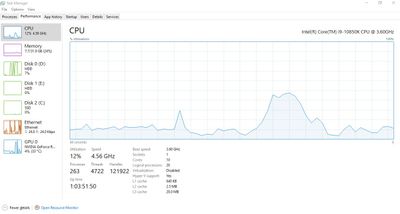 Here is a screenshot of performance normally 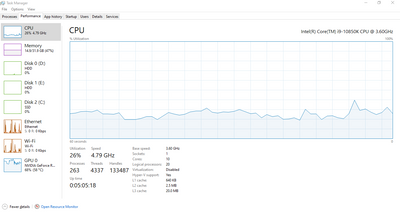 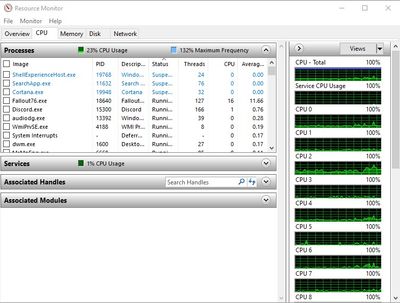 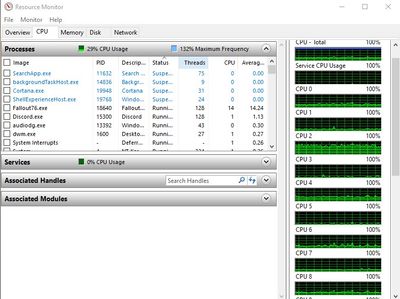 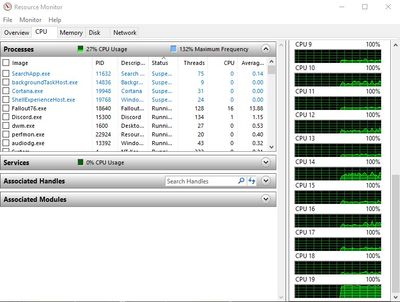 Sure! no problem. Please take your time and we will be waiting for the outcome of the steps. For any other inquiries, please don't hesitate to contact us back.

We are checking this thread and we would like to know if you need further assistance. Were you able to try the steps suggested in our previous post?

Please do not hesitate to contact us back if you have additional inquiries or if you need more time to test.

Goldfinch
Novice
944 Views
Solved Jump to solution
In response to AndrewG_Intel
Hello,
Yes I was able to complete the steps requested sometime yesterday but as I don't spend much time using it during the week I hadn't been able to successfully capture TM performance of all cores while gaming yet, my hope is to capture a crash but thus far have been unsuccessful in capturing it using a screenshot, I should however be all right to send my results within a day, I will spend tomorrow capturing a few screen shots, and once that's finished I'll send em right over.
In response to AndrewG_Intel
0 Kudos
Copy link
Share
Reply

Thank you for your response and for all these details.

Please allow us to take a look into this and we will be posting back in the thread as soon as more information is available.

Please make sure to select your country or region and to contact us within your local business Support hours. Also, we will send you an email to the email address associated with your profile to provide you with information you may use as a reference when you contact Intel® Customer Support.

Thank you for all your efforts in this matter.