Does anyone know what the differences are between the two models as I noticed the AX211 mentioned in the wireless drivers as a supported model.  Thanks!

Please, bear in mind that if you are planning to install any of these cards on a laptop or desktop computer, you will need to get in contact with the laptop/motherboard manufacturer for compatibility and drivers as well as for installation instructions.

If you would read the content of the links before posting them, you would understand why people are asking about the differences.

Please ask your colleagues to pay more attention to what they publish - for sure it was not filtered by any technician.

Before posting, I had already looked at that and I know what the AX210 is but what is different about the AX211 because if you look at the comparison, the features are exactly the same, does the AX211 improved on anything or have something the AX210 doesn't?

AX211 has an intel proprietary interface, otherwise they are the same. The AX201 and AX211 use a CRF interface instead of Mini PCIe / M.2

https://en.wikipedia.org/wiki/CNVi <- in essence a vendor lock-in by adding some obscure features which no one really uses.

Almighty1
New Contributor I
23,704 Views
In response to Spacefish


AX211 has an intel proprietary interface, otherwise they are the same. The AX201 and AX211 use a CRF interface instead of Mini PCIe / M.2

https://en.wikipedia.org/wiki/CNVi <- in essence a vendor lock-in by adding some obscure features which no one really uses.

What you said would have been true as that was what someone else on reddit thought as well but if you check the ordering page at the URL below, you will find that the AX211 also uses the Mini PCIe/M.2 interfaces:
https://www.intel.com/content/www/us/en/products/sku/204837/intel-wifi-6e-ax211-gig/ordering.html

Besides, if you look here:
https://www.intel.com/content/www/us/en/products/sku/204837/intel-wifi-6e-ax211-gig/specifications.h...

I mean the AX210 has a page https://www.intel.com/content/www/us/en/products/docs/wireless/wi-fi-6e-ax210-module-brief.html but there is none for the AX211 so the AX211 is more of a mystery.

I will proceed to check the issue internally in order to provide you with a more complete answer, and I will post back soon with more details.

hello to you, I already have an AX210 and I would also like to know the difference with the AX211 ! Thank you

After an investigation, I would like to inform you that the main difference is that the AX211 supports uplink MIMO. For other details and specifications, I recommend you to check with the laptop/motherboard manufacturer as any integration must be validated with them to avoid system performance impact

Almighty1
New Contributor I
23,407 Views
In response to DeividA_Intel

Almighty1
New Contributor I
23,391 Views
In response to DeividA_Intel

Thank you for taking the time to research it, what does the uplink MIMO do exactly and how much performance are we talking about?  As you are probably aware, many are using the Intel cards as replacements for what the
laptop/motherboad manufacturer included originally so they would not know anyways.   Ofcourse is that answer even correct because for the AX210, according to the page here:

So looking at that, doesn't it also mean the AX210 already supports uplink MIMO?  If so, that means that is not even a difference as you had stated.

In order to clarify this misunderstanding and provide you with more details, I will perform internal research and let you know as soon as I have any information.

Almighty1
New Contributor I
23,290 Views
In response to DeividA_Intel

Thanks, a lot of this would have been unnecessary if there was a link on the AX211 similar to the brief for the AX210.  Without it, it seems the AX210 and the AX211 are identical.

In order to get more detailed, I recommend you to check with the laptop/motherboard manufacturer and/or sales distributor since performance is linked to the system configuration and environment including Operating System (OS), chipset, access point, and other specs.

Almighty1
New Contributor I
23,067 Views
In response to DeividA_Intel

In order to get more detailed, I recommend you to check with the laptop/motherboard manufacturer and/or sales distributor since performance is linked to the system configuration and environment including Operating System (OS), chipset, access point, and other specs.

And exactly what will that do?  The laptop/computer manufacturer & sales distributor has nothing whatsoever to do with this.  They all are selling something that is manufactured by Intel.  The AX210 and AX211 has the exact same specs if you are using the website for information.  If someone was going to buy a WiFi6E card, why would someone buy one instead of the other?  Neither the laptop/computer manufacturer  sales distributor would have the specs because it was not provided by Intel to them.  Besides, many people who buy the AX210 and AX211 buys it from different places such as ebay and amazon as the laptop/computer manufacturer may use only Qualcomm/Atheros or other brands of cards and not Intel.  Intel is the manufacturer and as @Tiino-X83 had mentioned, you are the manufacturer and if you don't even know your own specs, no one does either.  You do not really want this as a complaint going to Intel Corporate Executive Offices for resolution.

Don´t get anoyed at them, they are marketing guys probably and have no technical detail knowledge..
The AX211 is the CNVi Version of the AX210, the AX211 is missing some parts of a typical wifi card which is integrated into the CPU on modern Intel systems. In this case the MAC, this is the part of the wifi stack that handles all the logic and talks to the CPU..
Buy the AX210, the AX211 will probably not work in your system if you don´t have the appropriate PCH and Intel CPU + Bios Support..
Google for: CNVi (Wikipedia) for more information.

Almighty1
New Contributor I
23,040 Views
In response to Spacefish

Well, I am not annoyed at them but what I mean is this should be documented somewhere on what the AX211 actually is.

it might or might not mean it's the CNVi version because remember we already went through that part earlier in the discussion which was my response to your response since remember they have a ordering page with specific part numbers on the AX211 so that means it in not CNVi or else those part numbers would not exist:
https://www.intel.com/content/www/us/en/products/sku/204837/intel-wifi-6e-ax211-gig/ordering.html

What we don't know also is that I don't remember exactly but the AX210 could have been announced before WiFi 6E officially became a standard and there might be certain things that the AX210 might not be in compliance with the official spec.  And it can always be similar to 802.11AC, remember the speed increases because of the amount of streams so the AX211 could have more streams than the AX210, that's why it's interesting to know what's actually different and then decide as that information should be helpful to others as well.  I mean the one thing you can tell that is different is the AX211 supports Windows 11 but not anything prior to Windows 11 as a example.  Regardless, the photos attached is actually of the AX211 from the FCC: 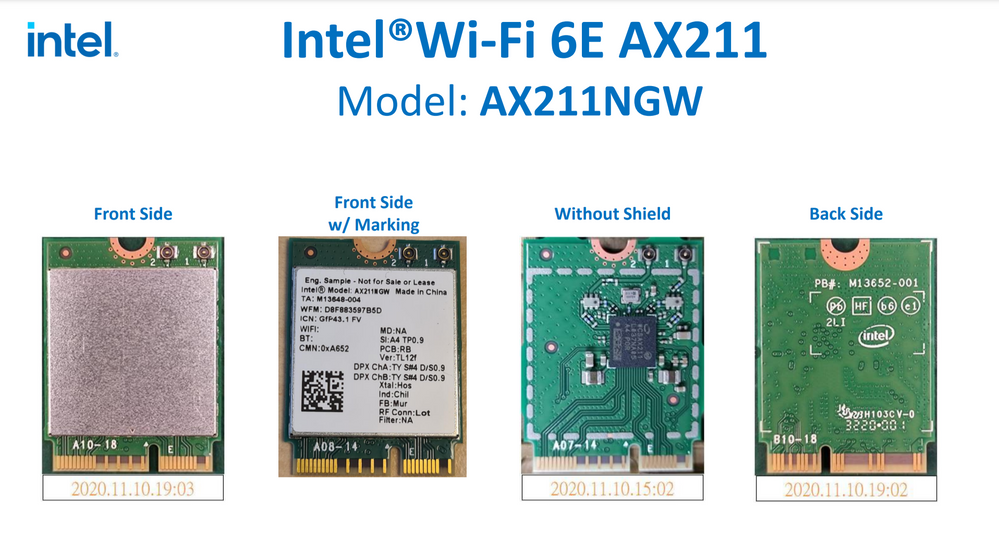 But in any case, Intel still needs to provide a product brief so people will know exactly what the AX211 is.

In my case, I already have 6 of the AX210.ngw's except I still don't know if I have the vPro version or not because like the other thread, they are all labeled as ax210.ngw's but there should be a way to tell the difference either by looking at it or using software.

In order to help you further on this, I would like to confirm the following:

1. Are you planning to buy or integrate any of these wireless cards?

2. Are you looking for this information because you are developing software or for any other reasons?

I will appreciate you let me know.

Almighty1
New Contributor I
22,657 Views
In response to DeividA_Intel
It's more of curiosity since I already have purchased a few of the AX210.NGW that replaced a Killer 1535, I am just trying to see what is different about the AX211 compared to the AX210 since there might be something new as in getting the best possible speeds since remember just like 802.11ac, there are more streams added.  So I might buy it depending on what's different as there are no specs on it yet, maybe you can
ask Intel Engineering to see what you an find.  I am looking for this information because like many others, if there is something better, I will upgrade to it and it won't b supported by the motherboard manufacturer or system manufacturer as Dell will only support what they are able to sell with the system.  They do not support anything other than the Killer 1535 which is Qualcomm/Atheros based.
In response to DeividA_Intel
0 Kudos
Copy link
Share
Reply

I do appreciate the clarification, I will proceed to investigate further on this and let you know as soon as possible.