I've had this issue since yesterday.

Yesterday, suddenly my internet connection was off, so when I troubleshot for the issue it said "There might be a problem with the driver for your wifi adapter".

Even my wifi adapter under Network Adapter under Device Manager has a little yellow warning sign(obviously indicating an error!). And the Device Statue under the properties says "

So, after checking many articles and videos on the internet I tried many things like disabling and enabling the adapter, uninstalling and installing the adapter, performing a network reset, using the Intel Driver and support assistant, and writing some commands in cmd, but none helped!.

Performing a hard shutdown helped me in connecting to wifi, but no more than 5 minutes.

And one more thing, while the wifi adapter is not working, even the Bluetooth is being disabled.

I am attaching a text document of my system scan as advised in other posts.

Hope I get an answer!

Not only did it not the solve the issue , but now Bluetooth is completely gone from my laptop!!! Bluetooth trouble shooter says " Bluetooth is not available on this device"! .

Previously, if went to view and enable show hidden devices, Bluetooth would show up.

But now it has completely gone from my laptop .

1. I'm assuming that you have uninstalled the previously installed drivers, rebooted your laptop and then installed the latest HP drivers.  Did you? Was the installation confirmed by installer successful?

2. Did you changed something in BIOS settings?

3. Verify in Windows Settings Devices > Bluetooth & other devices - Bluetooth is ON

4 Verify in Windows Settings Network & internet > WiFi - Wifi is ON

5. Open Device Manager. Then open Network adapters  and click on View > Show hidden devices. Attach image of the DM to your post.

6. Please run again SSU scan and attach the results to your post.

1. Yes, the installations were successful but did not help in getting bak wifi.

2. Yesterday later at night I updated the BIOS of my laptop since it solved the wifi issue to some people I read in a post, after the BIOS update, surprisingly I got both my WiFi and Bluetooth working properly, I thought the issue was solved. But it turns out that it was only solved temporarily since the problem is back as I woke up today.

3. There is no toggle to turn on Bluetooth.

4.  There is no Wifi category at all.

" There is no toggle to turn on Bluetooth.   There is no Wifi category at all."  This happens because the WiFi and Bluetooth is disabled in BIOS (or by other means in your laptop - for example some dedicated switch) 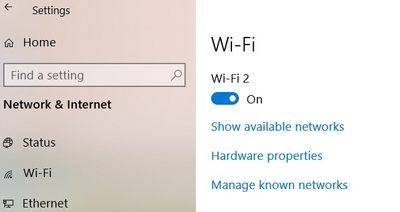 I reset my BIOS to default settings, and just like before the wifi and Bluetooth were working properly, but after a few minutes, the problem was back to normal.

Similar problem is reported by other HP user @Mohit  . Please refer to this thread.

Ok ,so......Is it safe to assume that the problem will be solved in the next minor update?

We would like to know if you need further assistance. If the answer if yes, In order to discard software or driver issues regarding Code 10 error in Device Manager for Bluetooth or Wireless device, we recommend you to follow the suggestions in the following link:

Also, regarding the Clean Installation of Drivers mentioned in the above link, we recommend you testing first with the customized drivers from your computer manufacturer HP* (OEM).

If the issue persists, you can repeat the steps using the Intel® generic drivers:

If the behavior persists, the recommendation is to check this further with the laptop manufacturer HP* to debug from their site and provide additional recommendations and also to check if the issue could be related to an operating system or hardware issue.

*Links to third-party sites and references to third-party trademarks are provided for convenience and illustrative purposes only. Unless explicitly stated, Intel® is not responsible for the contents of such links, and no third-party endorsement of Intel® or any of its products is implied.

We are checking this thread and since we have not heard back from you, we will proceed to close it now. If the issue persisted after following the steps in the previous posts, our recommendation is to check this further with the laptop manufacturer HP* for further assistance.