As you can see, there is an huge Spin Time at the beginning of the application (represented as the orange section on the left side): 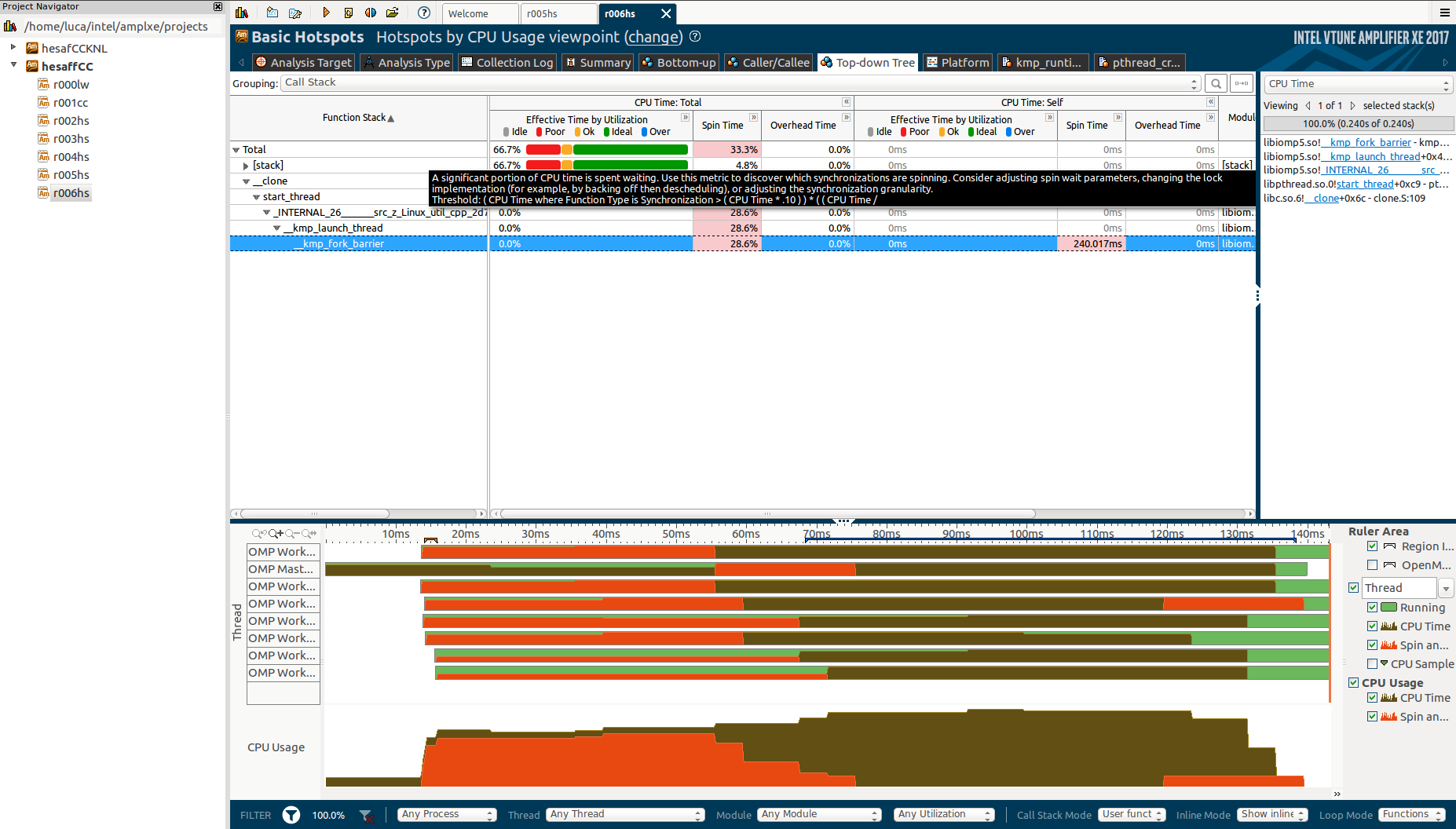 It's more than 28% of the application durations (which is roughly 0.14 seconds)!

As you can see, these functions are _clone, start_thread, _kmp_launch_thread and _kmp_fork_barrier and they look like OpenMP internals or system calls, but it's not specified where these fucntion are called from.

In addition, if we zoom at the beginning of this section, we can notice a region instantiation, represented by the selected region:

However, to my knowledge I never call initInterTab2d and I have no idea if it's called by some of the labraries that I'm using (especially OpenCV).

Digging deeply and running an Advanced Hotspot analysis I found a little bit more about the firsts unkown functions: 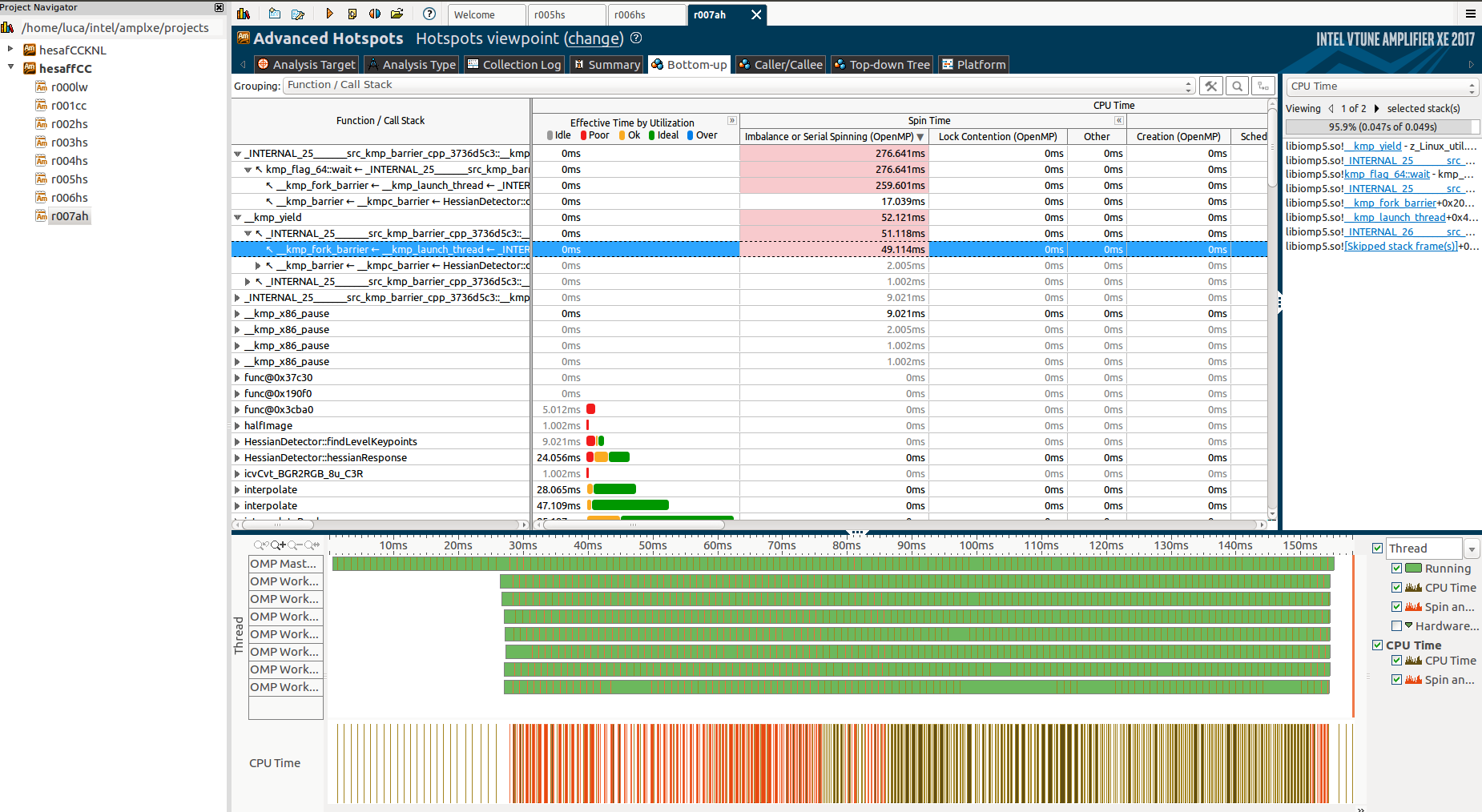 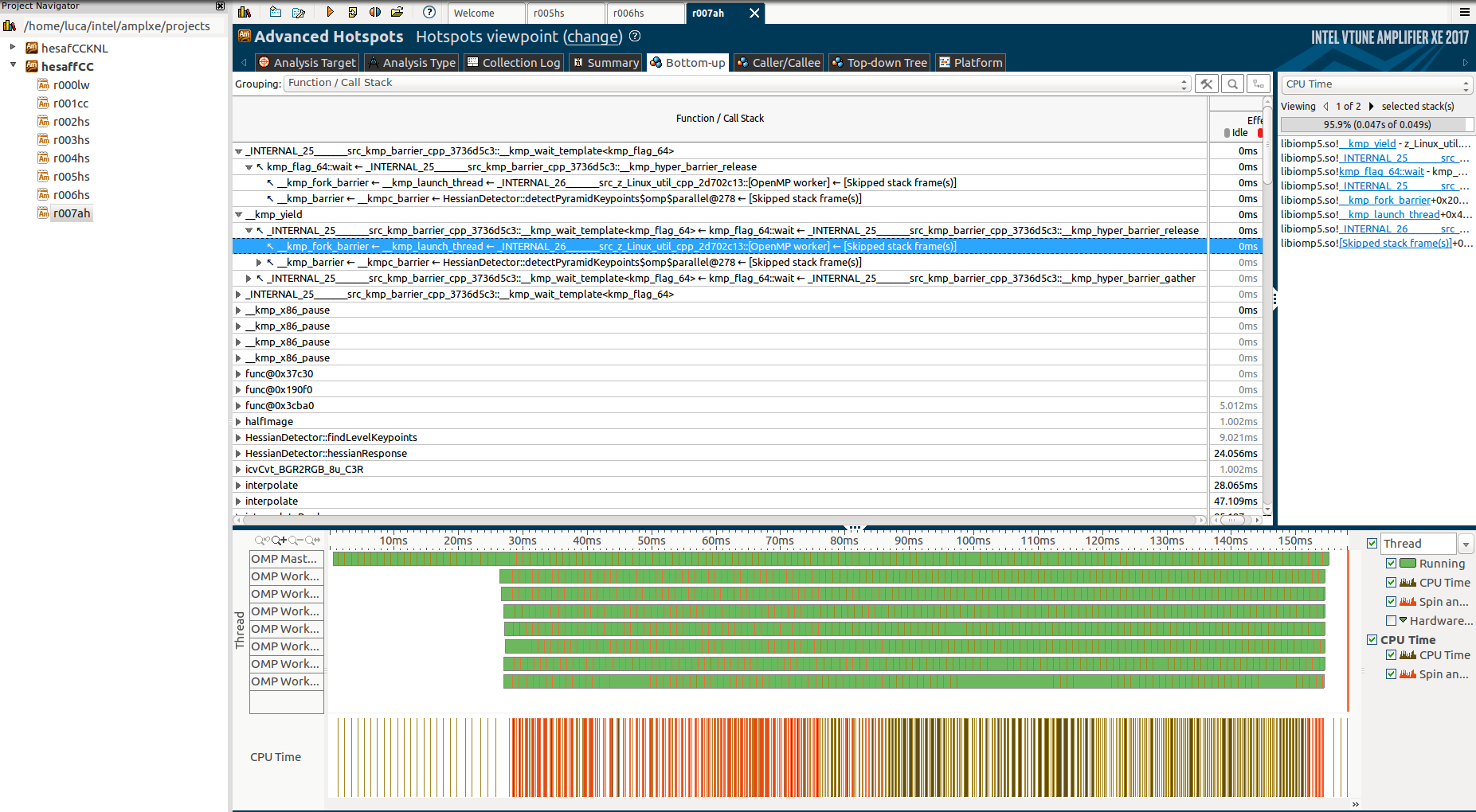 But again, I can't really understand why these functions are called, why they take so long and why only the master thread works during them, while the others are in a "barrier"/waiting state.

I attached part of the code, if it can be useful.

Notice that I have only one #pragma omp parallel region, which is the selected section of this image (on the right side):

The code structure is the following:

As far as I see your application runs only 160ms which is too small for the statistical sampling approach VTune Amplifier is using. To have better results I suggest you to cycle your algorithm in a loop, say 100 (better - 1000) iterations to have at least 10 seconds of execution time. In this case you should see much clearer picture of spin/overhead time, as well as better timing for hotspots functions.

As far as I see your application runs only 160ms which is too small for the statistical sampling approach VTune Amplifier is using. To have better results I suggest you to cycle your algorithm in a loop, say 100 (better - 1000) iterations to have at least 10 seconds of execution time. In this case you should see much clearer picture of spin/overhead time, as well as better timing for hotspots functions.

Yes, you are correct. Indeed, as you suggested, I used VTune also on 10 runs and the results are consistent with one run. Actually, I thought that "Allow multiple runs" available both from GUI and CL was going to do this, but I didn't see happening (the application is executed only once).

In addition, if I execute the program more than (say) 30 times, the performance gets worse, like the cores are "stressed" and they become less performant.

"allow multiple runs" switches the operation mode to avoid "multiplexing" so that each group of events is collected over the full length of the run.  If you didn't select enough events to require multiple runs, this will make no difference, but it could improve resolution of runs between 1 and 10 seconds.

CPU time on _kmp_fork_barrier function that VTune shows can be connected with several reasons.

There is Intel OpenMP analysis in VTune that will help you to understand the cost of these things.

First of all please be sure that the knob "Analyze OpenMP regions" on Analysis Type pane for Advanced Hotspots is switched ON.

In command line for the same purpose you need to add "-knob analyze-openmp=true".

Or alternatively you can use "HPC Performance Characterization" analysis type that has this ON by default.

Then after the analysis look at summary pane - you will be able to see "Serial Time" metric and its % from elapsed time. From the picture that you posted it can be close to 40% or something. If you can do nothing with this - look at the statistics per parallel region - particularly potential gain metric - it will allow you to understand how much inefficiencies in wall time you have inside a region. if you see numbers worth to explore - drill down by the link on the parallel region - in grid expand the region by barrier constructs and expanding the column "Potential Gain" see the time of imbalance on a barrier, scheduling or lock overhead. Please note that the time that is spent by worker threads waiting on a single barrier will be shown as imbalance.

One more hint - if you add "parallel-source-info=2" to compiler options - you will be able to see source name embedded in a region name and this will be easier to find a construct that VTune refers to in a source code.