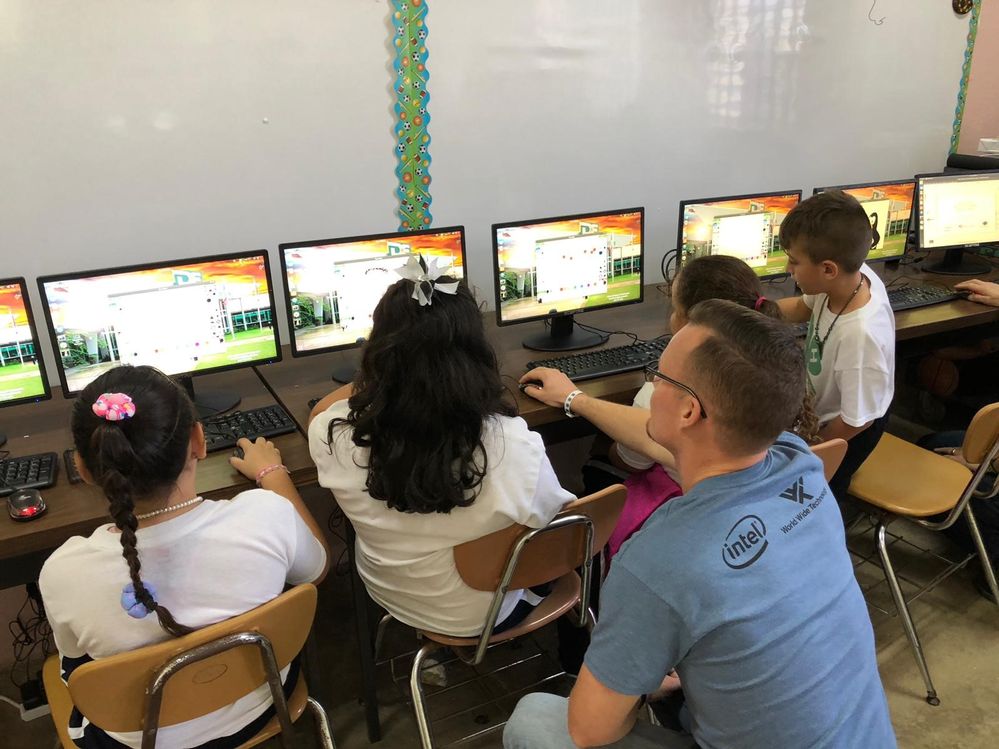 In late September 2017, Hurricane Maria made a direct hit on Puerto Rico, with winds of 155 miles per hour and as much as 30 inches of rain in a single day in some locations. Much of the island’s infrastructure was completely destroyed – including their electricity grid and their communications infrastructure. Three months later, five Intel employees traveled to the Mayagüez region of the island to assess hurricane damage at the local schools. They worked at a breakneck pace over nine days, visiting 161 schools and witnessing first-hand the impact of the worst natural disaster in Puerto Rico’s recorded history.

They promised to come back, a pledge that some locals took with a grain of salt. One principal angrily declared that the assessment was a waste of time, and that they would go back to their comfortable homes and never return.

Students exploring their new Intel NUC PCs. The IESC team installed 30 labs in 5 days with the help of their partners.

One year later, the team made good on their word - equipping 30 schools across the island with state-of-the-art computer labs, teacher training, and supplies. The donated equipment, time, and talent represents a contribution of $2.5 million to Puerto Rico’s schools, making this deployment one of the largest that Intel has ever supported.

The technology deployment was spearheaded by an Intel Employee Service Corps (IESC) team, Intel’s flagship skills-based volunteering program. The project was also the first test of the new Intel Foundation “Rebuilding Communities” program, which supports recovery efforts for communities impacted by natural disasters, and the support of the Governor and Chief Information Officer of Puerto Rico helped to make the deployment a success.

IESC teams are typically comprised of six to eight Intel employees, but this team was supersized to take on its increased scope. They were joined by six volunteers from World Wide Technology, an Intel reseller, as well as other Intel employees and representatives of two local technology firms.

“This project demonstrates how Intel employees can provide a boost to communities in their time of greatest need,” said Greg Ernst, a Vice President of Intel’s Sales & Marketing Group, who rolled up his sleeves to support the deployment along with four members of his staff. “This IESC team was relentless in overcoming obstacles over the last 12 months, and I am proud that this work will improve educational opportunities for students in some of Puerto Rico’s most underserved schools.”

The labs consist of 26 desktop computers – Intel NUCs with Core i3 processors, monitor, keyboard, mouse, and printer - plus one dedicated computer for the teachers. While the students could hardly contain their excitement when they entered the labs for the first time, it also had a significant impact on the teachers.

Mabel Lopez Gonzalez is a Principal at an elementary school in San Sebastian, where 78% of students live below the poverty line.

“Our teachers are very excited,” said Gonzalez.” They now have the tools to make their lessons more engaging and relevant to students who live in a digital world.” The school has already begun to set modest goals for improved academic results and decreased drop-out rates.

The deployment also included a hackathon, where 150 local university students developed applications over a weekend for a variety of purposes. Some focused on developing software that teachers and students can use in their new labs, and others devised ways of communicating during natural disasters, showing that the 2017 devastating storm is still on the minds of everyone in Puerto Rico.

“We walked the talk one year after Hurricane Maria, with my extended IESC team delivering a technology/STEM solution to 30 underserved schools, who never dreamed they would see us again”, said Laurie Horenstein, Intel Employee Service Corps Manager. “We were met with tears of joy, excitement and gratitude, impacting over 15,000 students, serving the community in their greatest time of need, delivering goodness like never before, taking home an experience of a lifetime.”

Intel will bring new IESC teams to Puerto Rico in 2019 to deploy an additional 1,000 donated NUC devices in another 30 schools. Watch this video to learn more about the technology deployment in Puerto Rico:

(view in My Videos)