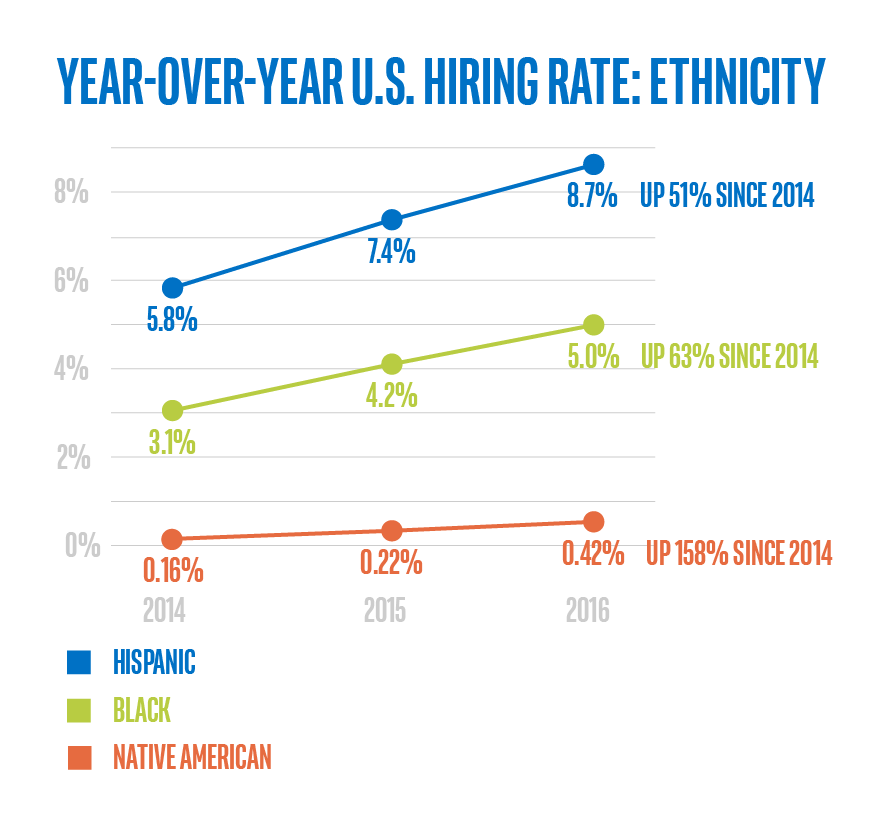 Intel is evolving, and diversity and inclusion are among the most important forces driving that evolution and reinvention. Meeting our diversity hiring and retention goals in 2016 demanded a continued dedication to inclusive hiring practices, introduction of innovative, research-based programs such as the WarmLine and multicultural retention and progression study, and establishing equity across the company through evaluating pay, progression and advancement of women and underrepresented minorities.  Progress toward our goals includes:


Each of these milestones is worth celebrating and represents the tangible results of our efforts toward real change and inclusion. However, there is still much work to be done to achieve our 2020 goal of full representation, namely with increasing the number of underrepresented minorities and countering the retention issue. Representation of underrepresented minorities in Intel’s U.S. workforce has increased modestly from 12.3 percent in 2014 to 12.5 percent in 2016, leaving room for improvement in 2017 and informing our focus over the next three years. We endeavor toward our goal of full representation, as Intel firmly believes that reaching a critical mass of women and underrepresented minorities in our workforce through creating an environment where everyone can thrive, brings ample benefits not only to Intel but the entire tech industry.

Here are a few of the key accomplishments we achieved in 2016:

Retaining key talent is vital to a strong and high performing work culture.  In our two years on this journey, we have learned that retaining our diverse talent is equally or even more important as hiring and represents a key obstacle that we must overcome in order to achieve full representation. We introduced two key initiatives in 2016 to better address retention:  The WarmLine and a comprehensive multicultural retention and progression study.

First, Intel introduced a retention-focused program in spring 2016 called the WarmLine, a service that provides a support channel for U.S. employees to explore different options with a personal advisor before they consider leaving the company. Choosing to leave a company is an individual decision, and we believe offering tailored and customized support and guidance to address employees’ concerns and issues helps us keep great talent. Since its launch in 2016, more than 1,200 employees have used the service.

In addition, we undertook Intel’s largest-ever study of retention and progression for our multicultural employees.  This study, presented in Q2 to Intel’s executive leadership team used quantitative analysis, qualitative interviews, and surveyed over 15,000 Intel employees.  It provided us a thorough look into the challenges our employees of color face and brought us many key insights for improvement that we have put into action.

In 2017, data and learnings from our multicultural retention and progression study and the WarmLine will be used to create tailored playbooks to improve our diverse representation, and improve inclusion within each business unit.  The playbooks will be delivered to each business unit and illustrate data-based trends, aggregate learnings, and key focus areas to improve retention, progression and representation. Our aim is to engage business leaders and managers in diversity and inclusion efforts more directly so that we can collectively work toward meeting hiring, retention, and progression goals.

We view pay and promotion parity as signals of the overall health of our company as well as a means of ensuring equity for all employees. We are proud to share that we have achieved 100% pay parity for females and underrepresented minorities in the U.S.

Intel first announced that it achieved gender pay parity in our 2015 Diversity and Inclusion Annual Report, and we have maintained gender pay parity through 2016. We announced that we achieved 99 percent pay equity for underrepresented minorities in the 2016 Diversity and Inclusion Mid-Year Report and were able to close this gap, reaching full pay parity for underrepresented minorities, by year-end.

Intel continually pays close attention to promotion parity, which means that promotions are distributed fairly and equitably between diverse and non-diverse populations, and strategically works to close any identified gaps on an ongoing basis. For the first time we are announcing that we achieved promotion parity for women and URMs for our U.S. operations in 2016.

We will continue analyzing our data to ensure fairness in our pay and promotion systems, as equity is a key contributing factor to make Intel a truly inclusive place.

Progression and leaps in leadership

Intel is committed to creating a culture of inclusion that represents the changing demographics of our world and shaping an environment where our diverse leaders thrive and progress.  This year, Intel promoted five women – one-third of this year’s inductees -- to the level of Fellow, a distinguished technical leadership position that represents the highest level of technical achievement within the company. Fellows are an elite group at Intel that participate in strategic technical planning, decision-making, and research and development activities and their application to Intel’s technological initiatives.

In addition, we have made great strides on improving representation in our VP ranks this year.  From our newly appointed U.S. Vice Presidents, 41 percent are women or underrepresented minorities.

Finally, we’ve seen positive trends in progression at all levels of the company and made improvements in diverse representation across early, middle, senior, and leadership levels for both gender and ethnicity.

While there is still much work to be done, these advances in our leadership pipeline as well as all levels of the company signify our commitment and recognition that diverse representation at all levels and particularly leadership, are key to a diverse and inclusive workforce.

Investing in underserved populations: disabled, veterans, and the LGBTQ community

In accordance with our far-reaching Diversity and Inclusion goals, Intel Capital announced in November the expansion of its ICAP Diversity Fund beyond startups led by women and underrepresented minorities.  The Fund will now include startups led by people with disabilities, U.S. military veterans or members of the LGBTQ community. Intel Capital President Wendell Brooks also announced the expectation that all members of his investment bring forward diverse startups for investment consideration. The $125 million fund is the largest diversity-focused fund in the venture capital industry.

Creating an inclusive supply chain is an important way to extend our diversity efforts to the global communities where we operate. In 2016, we surpassed our goal to spend $400 million with diverse owned suppliers, reaching $555 million in diverse spending. Intel was the first company to launch supplier diversity in Germany where we matched NGOs to bring certification for women-owned businesses. This year, we expanded our program to five more countries, bringing our global program to a total of 24 countries.

One year of hacking harassment

It’s been a little over one year since introducing Hack Harassment, a collective initiative seeking to promote a safer, more inclusive internet for everyone.

This year we amplified the conversation and promoted positive behavior change through our Hack Harassment pledge, a Campus Ambassador program to bring this message to college communities nationwide, and over 90 Major League Hacking hackathons to empower college students to create solutions to combat online harassment.

In December, we welcomed Olympic gold medalist, Gabby Douglas, to Hack Harassment as our first-ever Change Ambassador following her personal experience with online harassment during the Rio Olympic Games. We look forward to continuing our progress in 2017 and hope you’ll join us by signing the Hack Harassment Pledge at www.hackharassment.com/pledge.

Developing Intel’s Engineers of the Future

Intel already knows the names of future engineers that may be hired in the next 5-7 years. How? By investing in strategic STEM programs at both the high-school and college levels to pave the way for greater participation of underrepresented minority students in STEM education.

We achieved impressive results in just one year of our Oakland Education initiative, designed to see students from Oakland Unified School District (OUSD) high schools through college to jobs at Intel or in the tech sector. From the start, we’ve taken a comprehensive approach to focus on students, teachers, parents, and the community.  Before Intel’s investment, OUSD:

As part of a partnership between Intel and the American Indian Science and Engineering Society (AISES) to create pathways for Native American students, Intel is contributing $1.32 million to AISES’ “Growing the Legacy” scholarship program for Native American undergraduate and graduate students. This initiative will support 40 Native American university students every year for four years by providing them with financial support, Intel mentors, and opportunities for paid internships or jobs at Intel upon graduation. Intel and AISES are also collaborating on a culturally-appropriate computer science curriculum for Native American high school students.

This partnership extends our commitment and our investment in the Native American community following the Next Generation of Native American Coders project launched last year at the Navajo Nation in Arizona, where we introduced computer classes, trained teachers and provided a computer lab for three Navajo high schools. This fall, computer science classes were taught at these schools for the first time and 176 students signed up for the classes.

Seeing the tangible impact of what we’ve already achieved validates our investment of money, time, and expertise in our future workforce.

Moving into 2017, Intel will continue to improve the representation of underrepresented minorities and women within its U.S. workforce and establish challenging hiring, retention and progression goals.

Additionally, we will continue to foster an inclusive culture. Key to that culture is ensuring we focus on continuously improving our manager capability, which includes managers who are effectively trained in building and leading diverse and inclusive teams.  This will be a major focus for Intel in 2017, as we aim to have 100 percent of our managers go through manager capability training this year. We will also begin to address the issue of intersectionality, starting with a focused and targeted strategy around improving the retention and progression of Intel’s women of color.

We look forward to continuing to share our challenges and successes as we progress on our journey to a more diverse and inclusive workforce and industry in 2017.

Below is our full current demographic data (note: graphs will rotate through a gallery at the bottom of the blog text and data parameters and definitions below the graphs)


For more data specifics, including details about the data and the raw data set used in this blog: refer to the Intel Diversity & Inclusion Addendum to 2016 Annual Report at http://www.intel.com/content/www/us/en/diversity/diversity-2016-annual-report.html
Tags (5)
0 Kudos
Share 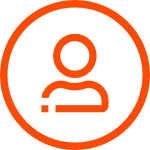