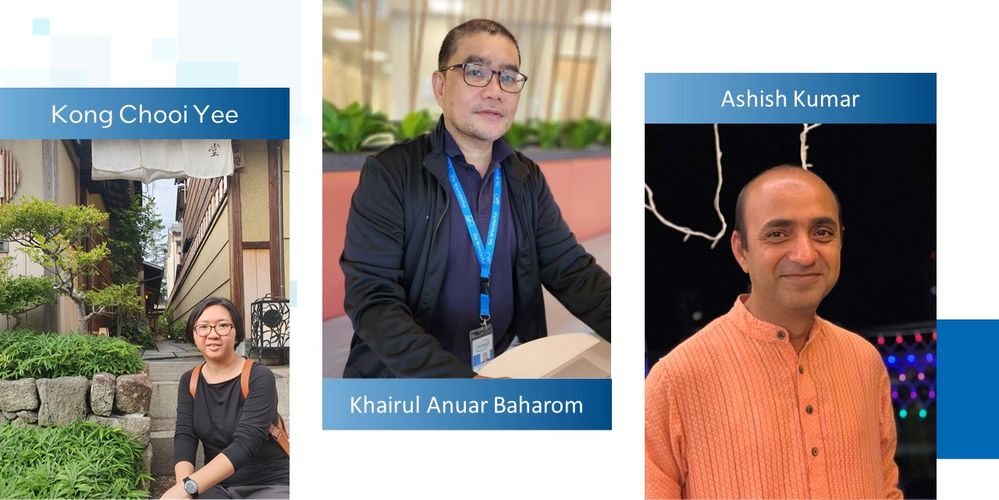 The Programmable Solutions Group (PSG) provides the speed, predictability and energy efficiency required for big-data analytics, device virtualization and machine learning. It's one of our organization’s fasting growing teams and the demand for expertise in this field is projected to remain high.

We recently spoke with three individuals from PSG and they shared a little about themselves, their role and what they've learned thus far.

Born and raised in the town of Pokok Sena in Kedah, Khairul’s interest in the world of engineering was guided by his love of physics and mathematics. He began his journey in semiconductors as a physical design engineer. As the years went by, it became clearer to him that management was his calling and today the SoC design senior manager leads a team of about 10 engineers.

“I found it fascinating to connect with people and achieve greater results as a team. This led me to stretch myself further to pursue managerial role and continue to grow within this path”

Referencing a quote by one of his favorite authors, Anais Nin, Khairul’s philosophy of life and management is one that revolves around constant improvement to the self regardless of how small a step or a task may be because, “the risk to remain tight in a bud is more painful than the risk it takes to blossom.”

“One of the most valuable lessons I can impart from my journey thus far is to believe that growth, both technical and personal, to a great degree is driven by teamwork spirit. So, for me the opportunity to collaborate with the best talent who are constantly pushing the envelope and innovating is the most rewarding and fulfilling experience working in PSG”.

Though some may think of a director’s role as being the pinnacle of a career, Ashish is relentless in his quest for continuous learning and growth. For him, if one is always learning, the rest will fall into place — provided the questions of ‘what am I doing?’ and ‘why am i doing this?’ are answered.

After growing up in Varanasi, India, he started as an engineer in the government sector before moving into the world of semiconductors. It’s a journey that has seen him and his family move to Singapore, back to India and now, to Malaysia. Ashish acknowledges that moving to Malaysia in 2016 with his family was a big step but settling and assimilating in the country was a breeze.

“From the warmth of the local community to the support given by Intel, it was a smooth transition for the family. I see Penang as being a small city with all the makings of a big city. There are many pockets for you to relax and find balance in your lifestyle. It’s quite a perfect mix, in a country that is generally welcoming and warm.”

Being at the helm of a 40-person team, his days are mostly peppered with project management meetings, both local and abroad. His work is largely about listening, connecting dots and helping others overcome roadblocks. For Ashish, sharing his thought process with his team is important. Beyond just assigning tasks and projects, he makes it a point to explain the ‘why,’ which in turn helps them understand what they’re doing, the purpose and their impact.

“The PSG group is undeniably one of the highest performing and growing groups in the organization. People here work hard, but it’s also a fun and healthy environment. There’s an abundance of opportunities not just to grow technically but also as person.”

As a validation architect, Chooi Yee’s role revolves around technical readiness assessments before a project begins its production cycle. It involves a multitude of tasks from reading through documents and aligning with cross-functioning parties to identifying gaps and liaising with the marketing team.

For her, the role is largely building on past experiences and knowledge. She began her journey in the company as a validation engineer, which is more hands-on in nature — allowing one to work with completed silicon. Her current role takes her to the early stages of production, giving her a fuller understanding and appreciation of the entire process.

As an active member of the Women @ Intel (WIN) network, Chooi Yee also makes time to share her story, relate and learn from others at gatherings with her peers. “I think diversity and inclusion is vital for any company to thrive and I’m glad to be part to be part of a culture that emphasizes those values alongside togetherness.”

“In the last three years, I’ve grown by leaps and bounds and I believe this is largely due to a workplace environment that is wholesome — from having effective organizational values to managers that emphasize the importance of mapping a clear career path.”