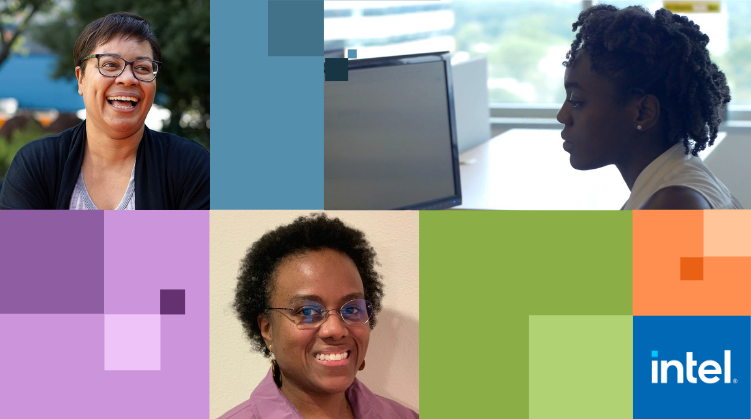 Take Lenitra Durham as an example. She's a Senior Software Research Scientist for Intel Labs whose 18-year career at Intel has spanned more than ten research areas, including wearable technology, drones, data centers, and networking. Her work exploring ideas and new technologies has led to the 40 patents she now holds.

"I think a lot of people get discouraged when they have an idea. They think it's not novel—it's not new. But I've learned just to write it and see," said Lenitra. "You will miss all the shots you don't take."

Lenitra views her Ph.D. as a launching point for her career and all she continues to learn through the years. But she's stretched herself beyond her degree, too, through a growth mindset of continuous improvement.

"You will not be confined to whatever you did for your master's or your Ph.D. here. You will get to work with amazing people, maybe have some failures, but you will learn and build upon what you've done in the past to improve and work on projects that can change the future," she said.

A match made through flowable film
For Principal Engineer Erica Thompson, the catalyst for her exceptional career was meeting her colleague Ebony Mays 18 years ago, in Erica's first year at Intel. At the time, Erica and Ebony were the only African American women in their workgroup, but they sought to change that.

"We were the only two here for many years. And then we started recruiting more African Americans. More started to come, and more followed," she said. "It's been fantastic."

Dubbed the "dynamic duo" by some of their colleagues, Erica and Ebony became collaborators on projects of all kinds.

"Ebony was the inventor of a flowable film, and she asked me to come up with a method of curing the material," said Erica. "We kind of fed off of each other's energy and expertise, and it made for an interesting combination."

They also brought a little bit of themselves to their work, naming the process and curing method after famous Black artists Jimi Hendrix and Nina Simone.

The impact of that first process was even greater than they realized and resulted in a few patents. And they haven't stopped there. Today, Erica holds seven U.S., seven international, and five internal patents.

Lenitra, Erica, and Ebony are trailblazers in technology at Intel. From projects to patents, they've used their skills and ideas to create a lasting impact across the organization.

Want to make your own impact at Intel?
Visit our career site to view open roles.