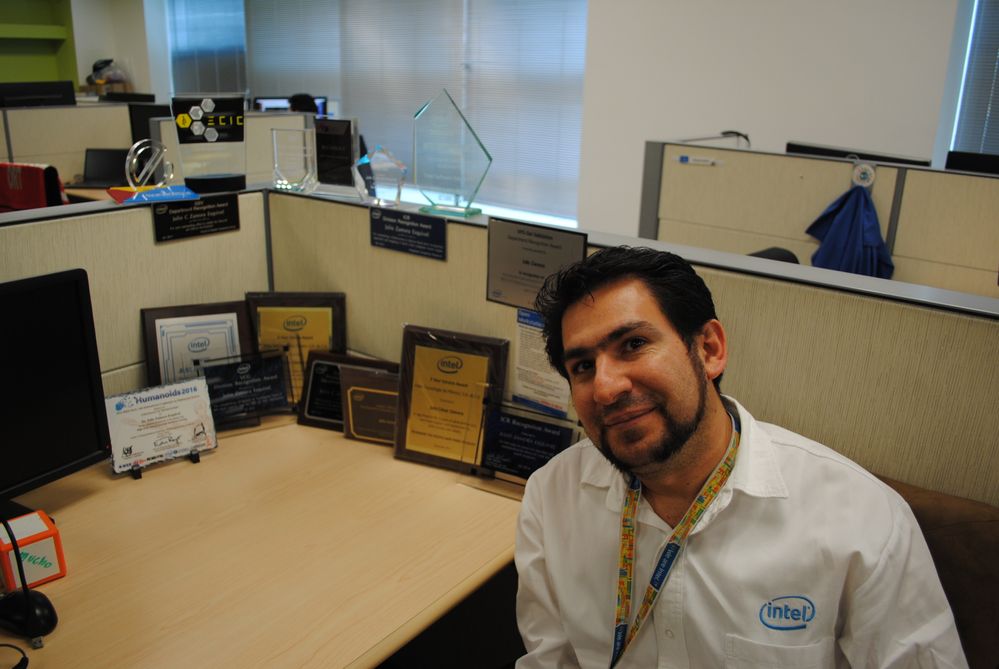 Coming to Intel, the first time

While I was studying to become an electronics engineer at the National Technological Institute of Mexico, I spent the summer of 2000 in the United States working for Pride Industries as a janitor for Intel. I used to clean the first floor of the FM4 building in the Folsom campus.

At that time they put processor diagrams on the walls. I used to stop and look at those diagrams. The employees were having fun with me wondering, why is the janitor looking at the diagrams? They’d ask me, "Do you understand?" I’d say, "Yes, I understand that this is a transistor.”  They suggested I work for Intel as a contingent worker, but I wasn’t ready. I wanted to know more and then come back and see if I can get a good job.

I remember the cubicles with a lot of awards. Some of the awards were amazing. I remember trophies with microprocessors on them and I’d say to my friends, "Oh my gosh, this guy is actually the one that helped build the microprocessor."

I promised myself, someday I want to have a cubicle like this inside of this company and I want to put all of my awards like this.

I now have a cubicle, inside this company, with some awards.

Coming to Intel, the second time

After cleaning Intel, I used some of that money to buy a laptop with Intel Inside. I keep that computer at my home because it’s something that gives me a lot of pride.

I went on to finish my Bachelor’s degree. Then I got my Master’s and, my eventually my Ph.D at Cinvestav in Guadalajara. My wife and I moved to South Korea to do my post doc work with Kaist in its HUBO lab. They create beautiful humanoid robots. I was working with the computer visual algorithms there.

Julio and his wife shortly after their daughter was born in South Korea.

One of my daughters was born in Korea. But shortly after she was born, I wanted to come back to Mexico. That’s when I joined Intel.

I’ve been at the Guadalajara campus for nine years. I’m a research scientist for Intel Labs. I work on computer vision and machine learning. My team focuses on understanding what is happening in a scene. I'm providing particular pieces of facial recognition.

When I joined Intel Labs, there was this award. If you had five patent application in less than a year, then you’d get an award. In Mexico, nobody had won the award.

So my friends and I decided to work together to achieve the goal. And we did. We achieved five patents in less than a year. Rodrigo Camacho and I, we were the first two guys that we've gotten the award. Now we have almost 18 patent applications.

I want 100 patent applications before I leave Intel. If I continue working as I am working right now with my friends, I don't see why not I can achieve 100. There are a lot of fellows having 200. Having 100 is the middle of what they have. If they did, why can’t I? I also want to be a PE [principal engineer] at some point. In Mexico we don't have any PE's. I want to be the first.

My love for math

I was not a good student in math at the beginning. In elementary school, I was nearly expelled from school because I was not good enough, but one of my teachers helped me a lot. He gave me some math problems to help me improve my knowledge in mathematics. And because of my teachers, and the training they gave me, I got to be so good at math that two years later, at 14, I was teaching math to 50 people. Back in 2014, I invented a new type of geometric algebra which is called quadric geometric algebra.

Julio (right) with his parents and siblings.

My family and me

I’m part of a big family. I have a brother and four sisters. I grew in Tulillo which is a very, very small town in Jalisco. It was less than 2,000 people living there. It's very, very small. It only had elementary schools, nothing else. When I was in third grade, my family decided to move to Ciudad Guzman so we could study there.

My wife and I have two daughters, Emely and Lily. One of my daughters has Nephrotic Syndrome, a kidney disease. We have always been protecting her because she's very sensitive to the environment.

Being featured in Forbes

It was an honor to be featured in Forbes Mexico magazine. But now I feel this huge responsibility because everyone knows my goal of wanting to achieve 100 patent applications and to become the first PE in Mexico. Now, every night, I'm trying to figure out how to do that, right? How to really, really make my dream a reality. The only confidence I have is, I did it before. When I was working as a janitor for Intel, I said, “I will be here. I will be working.” And I am. I love Intel.
0 Kudos
Share