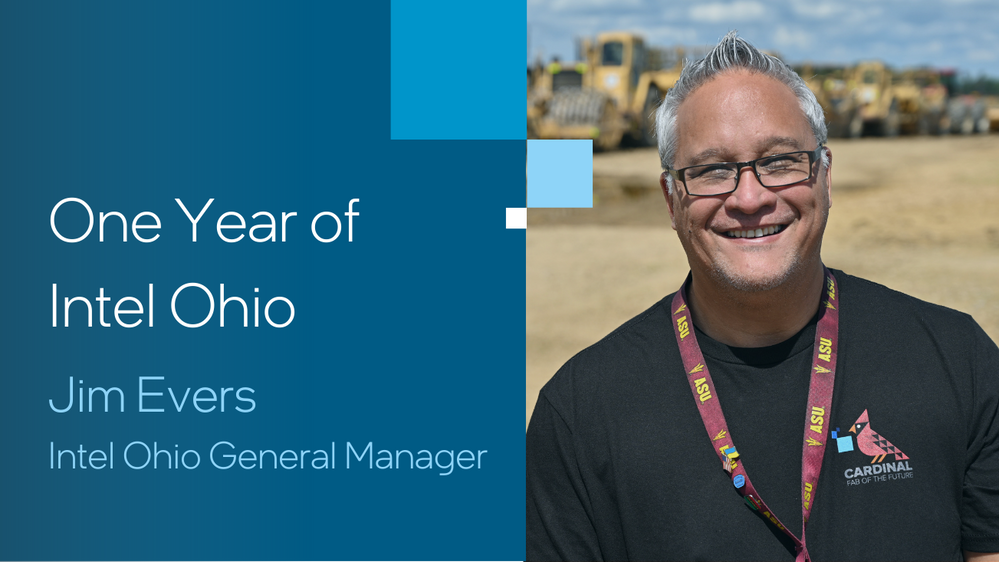 To My Fellow Ohioans, Intel Coworkers, Readers, and beyond –

We’ve reached a massive milestone at Intel Ohio. It’s been just over 365 days since we first announced our landmark $20 billion investment in the state, and the progress we’ve made is mind-blowing to say the least.

When Intel tapped me to manage its first greenfield site in 40 years, I recognized the opportunity for what it was: a chance to be part of history in the making. While exciting, this also meant packing up my roots in Arizona – a place where I was born, raised, and helped build Intel Ocotillo as it stands today – and moving across the country to start up two state-of-the-art manufacturing facilities in Ohio. I said goodbye to my friends, family and coworkers at Ocotillo, who have become my second family, to take part in a once-in-a-lifetime opportunity in the great state of Ohio.

One year later and I’m proud to say that I have more heart for this project than ever before. The work we have done so far is not only changing the future for Ohioans, but also changing the future for the entire U.S. domestic semiconductor manufacturing industry. On the anniversary of our monumental announcement, I wanted to look back on all the progress made in Ohio — and look ahead to everything still to come. 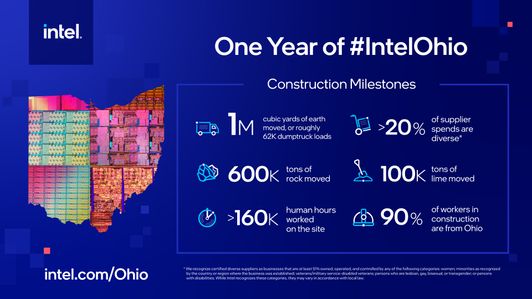 This is the largest single private sector company investment in Ohio’s history, and we expect the project to take about three to five years to complete. While this first year has been widely focused on site preparation – from leveling the land and digging new utility trenches with Gilbane to signing Bechtel as our general contractor – we’ve made some significant progress starting at the ground up.

Intel Ohio will not only see the construction of two new fabs, but also the creation of tens of thousands of jobs across the entire state. Our crews, consisting of 90% Ohioans, have collectively dedicated over 150,000 hours to prepare the land for Ohio’s first fabs. Here’s what they’ve accomplished in the past 365-days: Moved one million cubic yards of earth, 600,000 tons of rock, 100,000 tons of lime, and so, so much more.

These huge factories will produce some of the smallest, most complex technologies in the world — silicon chips — and will do it all right here in Ohio, thanks to local labor. Paired with Intel’s commitment to reaching 100% renewable electricity, net positive water, and zero waste to landfill by 2030 our Ohio site is designed with green building principles in mind to create an ultra-clean manufacturing facility.

This is a win for all Ohioans.

The heart, drive, and passion Intel Ohio has for the local Licking County community is exhilarating. In the past year, we’ve been heads down in the trenches working with local municipalities to ensure appropriate permits, connect the site to utilities, and prepare for what will certainly be an influx of skilled tech workers – especially as we ramp up our Intel grant, Ohio Semiconductor Education and Research Program. I love this initiative, as this impressive $50 million grant program will allow institutions across Ohio to implement new courses and curricula designed to help students from all backgrounds build career skills in STEM fields. This way, skilled workers from Ohio have the opportunity to learn, study, and stay in Ohio.

I know from my years at Intel in Arizona that the arrival of major manufacturing facilities brings a wealth of associated benefits and opportunities. Imagine what all those students who stay in Ohio for work will be able to do: the families they can raise, the businesses they can start, and all the ways they can give back to the community. This will be a boon for the local economy, enabling people to thrive right here in the Silicon Heartland.

At Intel, we see our role as both a catalyst and partner in this new chapter for Ohio. That’s why our Intel Ohio team has been active within the community, volunteering more than 400 hours in 2022 and participating in hands-on STEAM activities at events reaching more than 3,000 Ohio children. We’re proud to be a part of Ohio’s story and to help enhance domestic manufacturing capacity for our country. As Dr. Frederic Bertley, CEO of the Center for Science and Industry said at the groundbreaking for the new Ohio site last year, “This monumental and unparalleled Intel groundbreaking is an American story. One of American innovation, inspiration, and transformation.”

Intel is in it for the long haul.

When we decided to build new fabs in Ohio, we knew we would be in it for the long haul. Major construction projects like this take time, but, more importantly, they take partnerships, and Intel could not have asked for better partners in this endeavor than Ohioans and local suppliers.

As Ohio Senator Sherrod Brown said at our groundbreaking, “The technology of the future won’t just be developed in America…it will be made in America, in the industrial heartland — in Ohio.” These new facilities will help the United States strengthen its domestic semiconductor manufacturing capabilities and reduce dependence on foreign-made chips. They also represent what we see as an expansion of the tech sector from the coasts and into the center of the country, where it can open up new opportunities for local economies that were impacted by the outsourcing of manufacturing overseas. We believe this is the start of a new chapter for Ohio. Like President Biden, who attended the groundbreaking of this historic project, said, “It’s time to bury the label ‘Rust Belt’ and call this area the ‘Silicon Heartland. It’s fitting to break ground for America’s future here in Ohio.”

Ohio One – A future for Intel, Ohioans, and America.

Having already worked with more than 100 suppliers in Ohio, we knew about this great state’s long and storied history in manufacturing and its track record of producing firsts. From the Wright brothers, who grew up in Ohio and first envisioned their historic planes here, to John Glenn, the first man ever in orbit, and Neil Armstrong, the first man on the Moon, Ohio has been developing some of the brightest minds in science and engineering.

And now, Ohioans can add another first to the great state’s list – “Ohio One” – Intel’s first advanced semiconductor campus in the Midwest. Ohio One will bring a new epicenter of leading-edge technology and signifies Pat’s big bet on bringing innovation and cutting-edge manufacturing leadership back to Ohio and the Midwest. Ohio One represents a nod to the past and a look to the future of technology innovation for the Midwest and America. 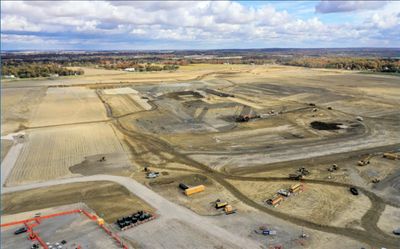 As a new Ohioan, thank you to everyone in the community for believing in us (and me) as we tackle this massive project together. Ohio One represents promise and progress for this region, and we look forward to continuing to work with partners across the business, education and government sectors to help create a brighter future for all Ohioans. Learn more about Ohio One and keep up with the latest updates on our dedicated Intel Ohio page.

With love from the Silicon Heartland,

To hear more from employees, check out these Intel Ohio Sound Bites!