Ethernet Products
Intel® Ethernet products and technologies
Announcements
The Intel sign-in experience is changing in February to support enhanced security controls. If you sign in, click here for more information.

2 typical Adapter Information values are "Not Supported" in PROSet utility?

Installed the latest and greatest network drivers and PROSet utility I could find for my I217-V, and noticed two typical entries (Negotiated Link Speed and Width) in the Adapter Information box are "Not Supported".  I wondered why...  If this is a bug or not.

Especially as I see "Speed: 1.00 Gbps Full Duplex" at the top of that box.  I assume 1.00 Gbps is the link speed.  Full Duplex seems like a possible link width, but I haven't used those values before.

Would be handy if I could copy/paste all important values from the app with a click.  I can't even select things to copy/paste.  Also the left edge (adapter select) is either hidden or gigantic...letting the user adjust the divider manually (click + drag) would be nice.

Thank you for the patience on this matter. Please see below update from our engineers and feel free to let us know if you have questions or clarifications.

Some devices support reporting of this information while others do not. This will depend on the device and the implementation.

This is not a bug or cosmetic issue, but expected behavior

Please provide the following information that would help us in checking your query.

1. Please share the link where the driver was downloaded from

2. Brand and model of the motherboard used

4. When was the issue first encountered?

5. Changes prior to the issue

6. Can you share a screenshot of the exact issue encountered on your I217-V?

Wow...that's a lot of work, but OK.  Hope this makes the bug get fixed very quickly.  It should be noted that the more work you have the user do, the more likely they are to just skip it.  A feature in PROSet to grab most of this into a ZIP or 7z would be smart.

5. Installed both the "27.0" driver and PROSet to match.  Then was looking around in the PROSet UI and noticed the odd missing values.  This survives reboots.  And I've run a number of OS repair commands just in case, like "sfc /scannow" and a DISM command.

6. Highlighted related areas in yellow.  Top has values I'd expect to see, and below are the missing spots. 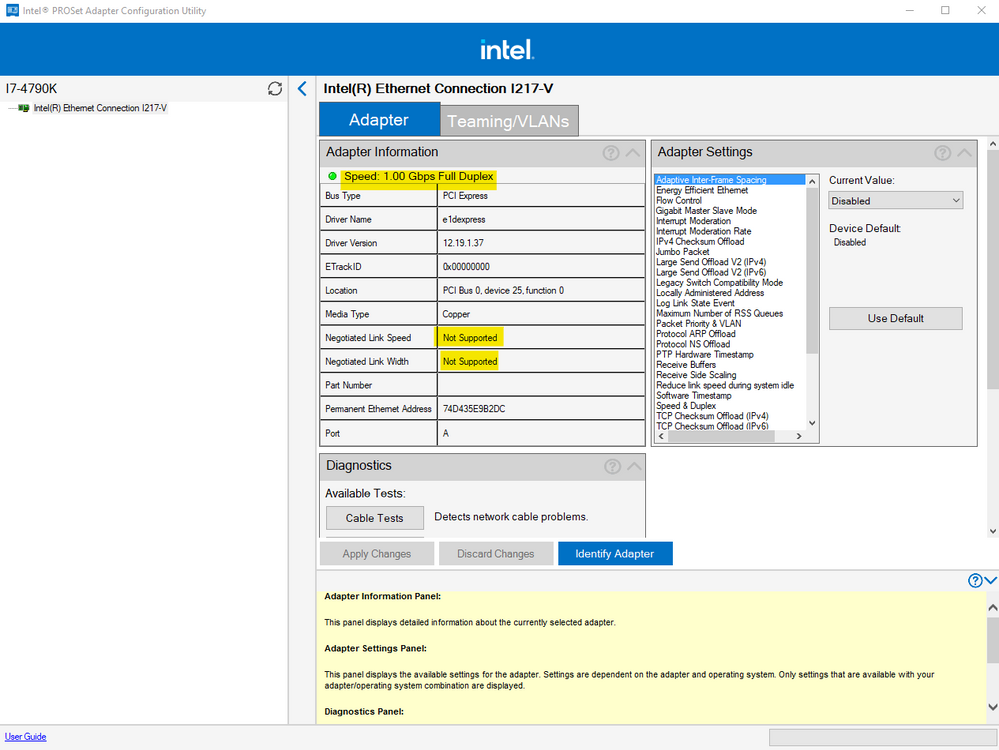 Thank you for the swift reply.

We highly appreciate your effort in providing the requested information.

Please allow us to check this further with our engineers. Rest assured that we will give you an update as soon as possible but no later than 2-3 business days.

Thank you for the patience on this request.

Please see below feedback from our engineers and we hope you don't mind sharing clarification below that would help with further investigation.

We acknowledged your feedback with regard to adapter specification extraction. However aside from this negotiated link speed and width, are you getting any performance and connection issue after updating the driver?

The device connects me to the internet like before.  I don't have a lot of visibility beyond that, outside of what the app provides.  I investigated all the settings and tried to set them in smart ways (turning on a precision time protocol for instance).

I tend to update things proactively, in the hopes they'll tend to fix issues I didn't know could be improved or add features I didn't know were missing.  Sadly features advertised as part of a product often aren't enabled on release day.

This report was to confirm my reading of the information was correct.  That the values can be read, and just aren't displayed there.  Not that this behavior is blocking anything for me.

It just looks poor for Intel.  Like some easy automated testing is missing, or someone isn't doing an obvious part of their jobs.

Also that the tool duplicates values for some reason.  I'm often of the mind that I'd rather something was done once, well.  If it's clear in the combined form (1Gbps full duplex), then why add entries to the table labeling each part?  It's almost like someone wanted to make the output look more impressive.  Complex.

Anyway, I've done my part, and it's up to Intel to do something about it.  Or not.

I hesitate to label anything done here with "Accept as solution" as you guys didn't do anything yet.  Not even admit this is wrong, or tell me I'm right for what those fields should say.  I wish Intel had a public facing bug area that showed when/if you guys were working on an issue we care about.

Thank you for the prompt reply.

Please allow us to re-escalate this request to our engineers for further investigation. We have clarified if you are having any performance issue as we would like to double check if this is only a cosmetic issue or the issue affects any performance on the controller.

Rest assured that we will keep you posted on this request and post another update no later than 2-3 business days.

Hoping for your kind understanding.

Thank you for the patience on this matter. Please see below update from our engineers and feel free to let us know if you have questions or clarifications.

Some devices support reporting of this information while others do not. This will depend on the device and the implementation.

This is not a bug or cosmetic issue, but expected behavior

Aha!  That would be neat information to have.  Especially as this is an integrated device, so I can't look at pins on the card edge or USB port to guess the speeds.

I realize you can't support everything everywhere, but I'd like to put in my vote to expose this even for integrated device users in the future.

Thank you for your diligence and clarity on this issue!  So many interactions with other company's turn into "we'll tell the development team, but can't get you a response about it."  And then you don't know if any progress was made at the end.  Or if they just trashed the information.

Please keep up the good work!

Appreciate your response. We are more than glad to be of help on this matter.

Since you already accepted our reply as solution, please be informed that we will now close this request. Thank you for your time and kind cooperation on this request. Just feel free to post a new question if you may have any other inquiry in the future as this thread will no longer be monitored.

May you have an amazing weekend ahead and stay safe!