The Triple Speed Ethernet MAC core (UG-01008, 3/29/2019) has a feature which provides alignment of IP headers on 32-bit boundaries by inserting a 2-byte pad of 0x0000 at the beginning of the packet.  The documentation is unclear on exactly how this works. The description of the feature (enabled with the IP editor) is:

Turn on this option to include logic that aligns all packet
headers to a 32-bit boundary. This helps reduce software
overhead processing in realignment of data buffers.
This option is available for MAC variations with 32 bits wide
internal FIFO buffers and MAC variations without internal FIFO
buffers.
You must turn on this option if you intend to use the Triple-
Speed Ethernet IP core with the Interniche TCP/IP protocol
stack.

IP Payload Re-alignment
If you turn the Align packet headers to 32-bit boundaries option, the MAC
function removes the additional two bytes from the beginning of Ethernet frames.

What is not indicated here are the following:

Also, are there any other compile-time (IP Editor) or run-time (configuration space register) settings that have an effect on this? 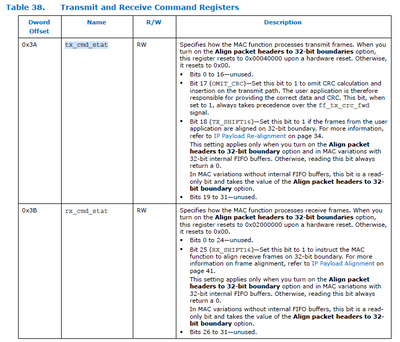 The description for TX_SHIFT16 says "Set this bit if the frames from the user are aligned on a 32-bit boundary."  But the Avalon streaming interface requires the first word of a packet to by a full word (the empty[n-1:0] field is ignored), so it is not clear how the frames could not be aligned on a 32-bit boundary., as the interface is 32 bits wide.

Also, are the TX_SHIFT16 and RX_SHIFT16 bits forced to a specific state by the Align Packet headers to 32-bit boundary option?  The user guide only states what happens if there are no FIFOs in the core.

This applies to both transmitted and received packets.

For the receiver, MAC adds two-byte zeros at the Avalon ST RX 32 bit interfaces, so that the payload will align to 32 bits boundary.

For the transmitter, the application layer sends the ethernet packet which is payload alignment to the Avalon ST TX 32 bit interfaces, and then MAC removes the additional two bytes (zero) from the beginning of ethernet frames.

Just to add on:

If further support is needed in this thread, please post a response within 15 days. After 15 days, this thread will be transitioned to community support. The community users will be able to help you with your follow-up questions.