Last year I had an issue where my GXB block (included as part of HDMI RX IP) was stuck in calibration: https://community.intel.com/t5/FPGA-Intellectual-Property/Cyclone-10GX-transceiver-calibration-hung/...

I now have a new situation.  I was, after an extended battle, able to get the HDMI RX design working.  This design consisted purely of two HDMI RX channels running in a Cyclone 10GX.  The design worked on both the Cyclone 10GX dev board, as well as our own prototype hardware.

When I incorporate those same HDMI receivers into my full design, running on the same hardware, the transceivers no longer work: they appear to be stuck in calibration again.

So again: two designs, both incorporating identical HDMI RX blocks connected to the same pins, running on the same hardware: one works, one doesn't.  And once again I have no idea how to determine why calibration is not finishing in the GXB block.

In the previous thread, you suggested I work with the GXB example design to see if I can get it working on my hardware.  We are past that now; I've had the HDMI working.

Given known working hardware, what should I look at?  I feel like there must be a difference between my two projects, but I've checked through them about a thousand times and haven't come up with anything.

Your Quartus design is complicated and I may need more time to slowly digest it.

Anyway, I have below 2 extra finding to share with you

Pls help me to understand your problem statement first.

I apologize my initial question was badly lacking in details.  Here's a simplified block diagram:

There are two HDMI RX channels instantiated at the top level, and then a whole bunch of other stuff instantiated in Platform Designer.

If I comment out the Platform Designer instantiation, and its related I/O (PCIe and the DDR3 controllers) and change nothing else, then both HDMI RX channels work correctly, and can fully lock onto incoming video.

If remove the comments and include everything, the HDMI RX channels stop working, despite the fact that they shouldn't (?) be affected by the rest of the stuff.  Timing appears similar between the two builds, no obvious differences there.

Here's a Signaltap with Channel 0 connected: 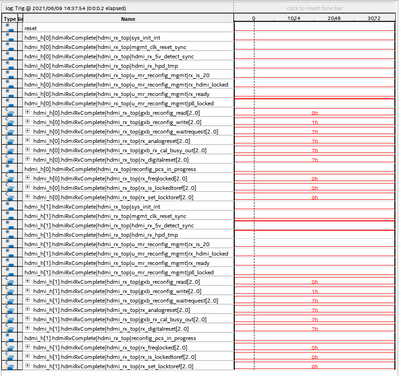 And here's one with Channel 1 connected: 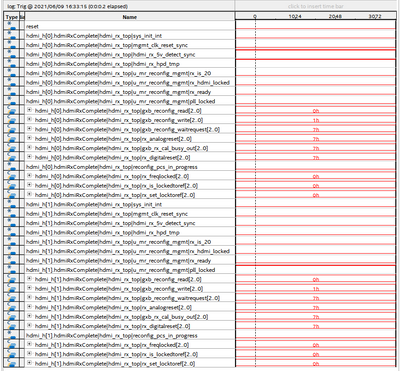 In both cases, all transceivers seem to be stuck in calibration.

And just for completeness, here's the Signaltap of channel 0 after the Platform Designer block is commented out of the top level source file (NO OTHER CHANGES).  Everything looks great. 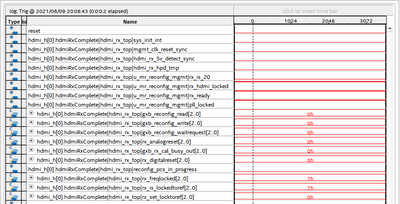 Np and thanks for detail explanation.

I've since tried a great many different things, all to no effect.  Here are some details:

Do you mind to share your full design with me in forum private message then I can help to take a look as well ?

>Do you mind to share your full design with me in forum private message then I can help to take a look as well ?

I would be happy to.

alright, I will wait for you to share design with me. Thanks.

Your Quartus design is complicated and I may need more time to slowly digest it.

Anyway, I have below 2 extra finding to share with you

Just want to follow up is there any latest finding that you want to share with me ?

I have not hear back from you for close to 1 month.

Therefore, I am setting this case to closure first.

Feel free to post new forum thread if you would like to resume the debug discussion in future.

Sorry I lost track of this for a while.

Getting the PCIe clocks going cleared my calibration problem, and the accumulation of other suggestions has me running successfully at 4K60.

I am seeing some other weird issues but if I can't figure them out I'll post separately.