This wiki page is dedicated towards users that are using the Intel Generic Serial Flash controller with EPCQ flash or other flash and are looking to erase the entire flash and protect blocks of memory. There are some example designs, but none seemed to adequately cover erasing parts of the flash or the entire flash. Similarly, no examples were found to do block protection or protect the entire flash.

This example was created using Cyclone V, EPCQ256, and the Intel Generic Serial Flash controller. The example was compiled and programmed to a TerASIC Cyclone V development kit and then proven using System Console. The example should allow for embedded developers to leverage the sequence of read and write commands using system console into their NIOSII or other CPU complex.

Intel Generic Flash Erase Protect.qar - see attached at the bottom of this article

The example design contains a Platform Designer (Qsys) design that looks as follows: 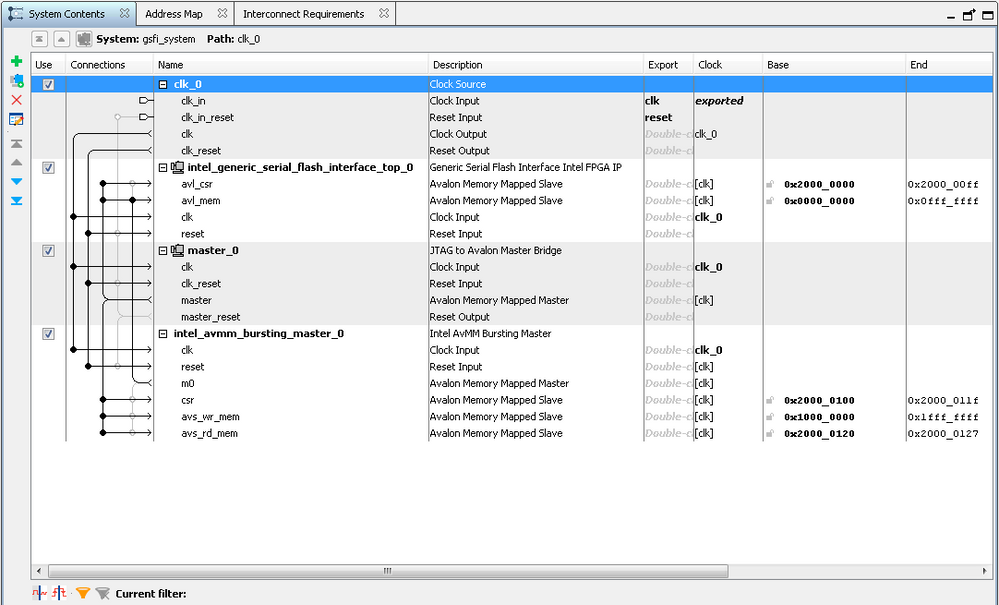 The design uses a known good external clock running at 50Mhz on the TerASIC Cyclone V board at PIN_R20.

This example runs on the TerasIC Cyclone V GX Starter board.

The following Tcl script is used to setup a number of procedures that can be run real time in System Console or be used as procedures for embedding into other scripts if needed.

Using the procedures in Tcl script, the following can be performed:

Program the Cyclone V and then open up System Console.

Once in System Console:

Now all the procedures are available to run.

Will take a few minutes… should see “……” in blocks of 60 and then newline.

At any time, you can issue this command to check the status register of the Flash:

No memory should have been written

The example provided works for Cyclone V and the EPCQ256. The example can be leveraged into other Intel FPGA families and other flash devices.