Automatically Rolling Back to Previous Graphics Driver When Updating Windows

I've got a Dell Inspiron 5593 laptop with Windows 10 operating system and Intel® UHD Graphics card installed in it. Recently I updated its drivers to the latest version - Intel® Graphics - Windows® DCH Drivers (30.0.100.9684) via intel driver support assistant . But when updating my windows it automatically rolls back to previous driver version (26.20.100.7463) and intel driver support assistant persistently notifies me that it has a new driver update.  I have tried the solution provided in the web page too - Error Message Appears When Installing Intel Graphics Driver 26.20.100.8141 or Newer.  But the issue persists. 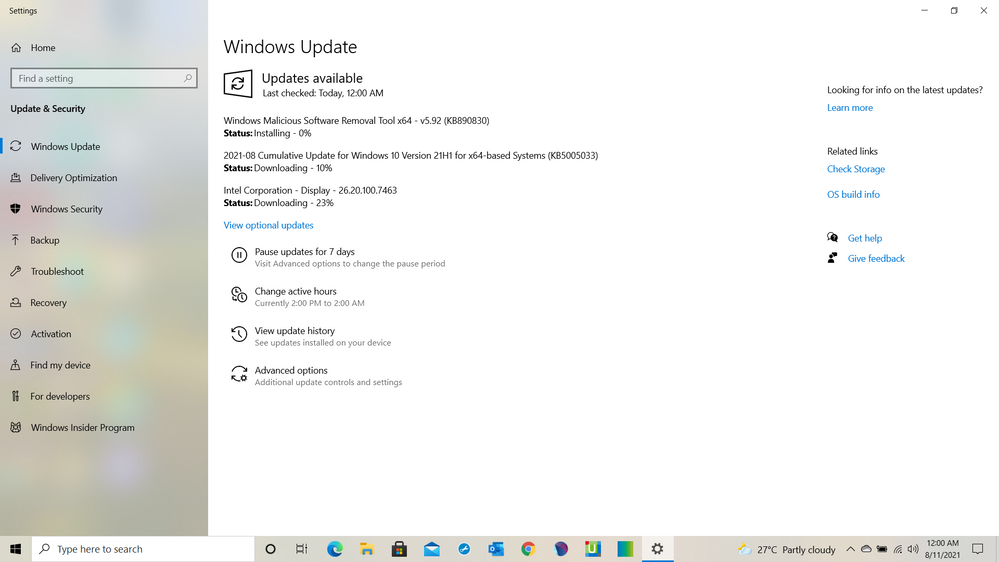 Just to make sure we understand this scenario, could you please clarify what the specific issue is in this case?

Also, Is there any particular reason or problem why you are trying to install the Intel® generic drivers? Have you tested with the customized drivers provided by Dell*?

It is worth mentioning that the driver or software for your Intel® component might have been changed or replaced by the computer manufacturer (OEM). OEM drivers are handpicked and include customized features and solutions to platform-specific issues and the general recommendation is to use the customized driver provided by the OEM, especially for laptops and/or systems with Dual Graphics configurations (e.g.: Intel® + AMD/NVIDIA Graphics).

In fact, as per Dell's website*, they have available a graphics driver newer than the one Windows* Update is offering you and it is the Intel Iris Plus/UHD Graphics Driver 27.20.100.9365, A01. Have you tested with this driver? Please provide details.

Finally, if you are still interested in installing the Intel® generic driver and the issue persists, please run the Intel® System Support Utility (Intel® SSU) to gather more details about the system.

To upload and attach a file, use the "Drag and drop here or browse files to attach" option below the response textbox.

In regards to the issue as per your answer # 1, it is expected behavior that the Windows* Update service will "Update” a driver if it deems the driver to be ‘better’ than the driver installed.

However, based on the Intel® SSU report and we noticed that your system comes with dual-graphics (Intel + Nvidia*). In those cases, the driver or software for your Intel® component might have been changed or replaced by the computer manufacturer and we recommend using the OEM (in this case, Dell*) driver customized for your system. As per Dell* websites, there is a graphics driver newer than the one offered by Windows® Update. We recommend trying this driver first to see if this helps with the behavior and the other issues with Blue Screen of Death (BSOD) and Adobe Lightroom Classic: Intel Iris Plus/UHD Graphics Driver Version 27.20.100.9365, A01.

If the issue persists, you may try the latest Intel® generic DHC driver version 30.0.100.9805 (Latest). If you still experience the issue that Windows* Update reverts to a previous driver, let the Windows Update driver be installed and then just simply reinstall the latest generic DCH driver.

Let's see first if this helps with the driver installation behavior and with the other issues.

One more thing in addition to our previous post. With respect to your question about if those "optional driver updates" offered by Windows* Update might solve the issue", we cannot guarantee that it would be the solution. Unfortunately, Intel® doesn't control the type and versions of drivers offered by Windows and it is supposed that Windows* offers drivers that have been customized by the OEM.

The general recommendation is to keep the system up to date (Windows Operating System updates, drivers, BIOS, software updates, etc), but if you would like to have more detailed information about those optional updates and their impact on the system, we recommend checking this directly with Microsoft* Support.

Please feel free to share the outcome of the steps and if the issues are solved or not.

Thank you for the information. I will let you know whether this will resolve my issue or not.

Sure, no problem, and thank you for your response. Please take your time and we will be waiting for your feedback regarding the steps.

We are checking this thread and we would like to know if you need further assistance. Were you able to test with the OEM driver from DELL* or with the latest Intel® generic driver?

Please do not hesitate to contact us back if you have additional inquiries.

Thanks for following up.

Thank you for your response and for the feedback. We are glad to know after installing the OEM drivers from Dell*, this resolved the BSOD issue. We understand that you are still monitoring the behavior. Please feel free to share any new event in regards to this behavior.

Should you have any other inquiries, please don't hesitate to contact us back.

We are checking this thread and we would like to know if you need further assistance. From your last response, we understood that after installing the OEM drivers for both Intel® and Nvidia* Graphics all issues were solved but you wanted to monitor the behavior. Are the issues finally fixed and can we consider this thread solved? Please do not hesitate to contact us back if you have additional inquiries.

Thank you for your response and for your efforts in this matter.

We have released a new driver version. Could you please try using Intel® Graphics DHC driver Version 30.0.100.9864 (Latest)? To install the driver, you may try a Clean Installation of Intel® Graphics Drivers in Windows* in order to discard issues related to previous update processes/installations.

Also, please run the Intel® Processor Diagnostic Tool to verify that both the processor and the GPU (Graphics Processing Unite) are fine. Note: To save the report, once the test is done, click on "File >> View Results File" and attach the .txt file to your reply.

Finally, it seems that Dell* has released a new BIOS version. Based on the Intel® SSU report the system was running BIOS version 1.16.0. Now, on Dell's website*, we see that version 1.17.0 is available. We recommend checking with Dell* Support if any potential fix related to this behavior is included in this release and if they recommend updating to this version.

We hope this helps. Please kindly report back the outcome of the tests.

I had updated my bios to version 1.17.0 already when I encounter the issue again. Please find attached herewith the text file showing the results after running  Intel® Processor Diagnostic Tool . Will the driver stay permanently in place after installing to the latest  (Version 30.0.100.9864 ) ? or will it roll back to current version I'm using?

Thank you for your response and for these details. Verifying the Intel® Processor Diagnostic Tool report, we noticed that tests went Ok, the Result is Pass.

In regards to your inquiry, the behavior of "automatic driver rollbacks" is due to Windows* Update behavior. We cannot guarantee if the Intel® generic driver will stay (hopefully it will), but if this event re-occurs, please just try to reinstall the latest generic driver and Windows Update should not reinstall a previous driver. If the behavior keeps occurring, we would recommend verifying with Microsoft* Support for assistance to avoid "automatic driver updates/rollbacks".

Once you are able to test using driver Version 30.0.100.9864, please kindly let us know if this helps with the BSOD issues.

We are checking this thread and we would like to know if you were able to test using driver Version 30.0.100.9864.

For any other inquiries, please don't hesitate to contact us back.

Please give me 1 week of time to test the new drivers. Thanks for the follow up.

It rolled back to previous driver (27.20.100.9365) after installing to the latest while Windows being updated.

Thank you for your response and for your efforts in this matter.

We understand that Windows* Update is still going through that persistent behavior about rolling back to a previous driver (possibly an OEM driver). This is related to the behavior we previously discussed, which is specific to how Microsoft* Update Service handles this.

Note: Since it seems Windows keeps pushing to install previous versions of the driver, in order to be able to test the generic driver, please do not uninstall the existing driver using the "Device Manager" method and checking the checkbox to remove driver files nor the clean installation steps. This will remove the driver from the driver store, causing Windows Update to install it again. Instead, let's try to install the latest generic DCH driver over the existing driver by just running the .exe file installer.

Please feel free to share any feedback about the outcome of the steps.

Also, before Windows* Update pushed the driver rollback, were you able to test with the generic driver at least for a short time? Did it work fine with no BSOD issues?

We are following up on this thread and we would like to know if you were able to review our previous post. Were you able to try the suggestions?

We have not heard back from you so we will proceed to close this thread now. If you need any additional information, please submit a new question as this thread will no longer be monitored. It has been a pleasure to assist you.