Just a little shocker while I was playing games/test streaming on Twitch/chatting on Discord with friends. My laptop completely froze for a good minute or two because it ran out of RAM (that's 64GB), and peaked at 95% at around 45GB before going down slightly. 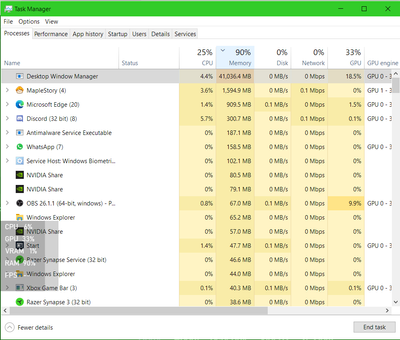 Though I'm running on 27.20.100.9466. Half my senses tell me it's partially Microsoft's to blame as well. But apparently they only have community forums and not actual ones...

A solution: on my Dell desktop 8930 I switch the tower on but delay turning on the monitor for a few minutes (up to five). This prevents the ludicrous escalation of window manager seemingly permanently - do not know why this should be but it might help until a proper resolution is found!

It's Intel drivers issue my brother has a laptop with the same version of Windows but he doesn't have intel graphics he has nvidia graphics and no problems. why intel whyyyyy 😭😭😭😭😭😭

it's intel's problem to me and my sister (HD 630/530) we do the same with dwm.exe consumes 1.5GB of RAM and my brother doesn't, he has nvidia graphics without integrated graphics (we all have the same version of windows) 20H2

I also noticed that when you disable a dGPU in device manager and use >  27.20.100.8476 this wont trigger the issue too, because this will also break modern standby. Disabling a device in device manager will prevent the laptop to enter modern standby, therefor no memory leak happens. You can test this with powercfg /sleepstudy and see a 0% HW DRIPS state when this is not working, ergo no modern standby happening.

I am using latest 27.20.100.9466 with dGPU turned of, which allows c10 states, but not DRIPS state, which is fine for me, because I am just using the laptop on power cord, so this is a workaround for people who wont use the laptop on battery.

So people not using standby at all with their laptop wont ever see this issue happening, who just shutdown their laptop every day and reboot it.

This might also the reason why Intel "couldn't reproduce it", because they obviously didn't use standby or not long enough in between testing periods.

If you just reboot the laptop and wont ever use standby or hibernate in between, this issue wont ever happen.

So this might not be an Intel driver bug at all, but 100% a Windows bug. Also why there are no reports with Nvidia/AMD GPUs because there is no modern standby on desktop.

@HKlum Cool thanks! I'll pass this along to the Dev that's working on it. Hopefully this helps them focus on the right area for root cause. Stay tuned...

Thank you for your help but the only thing that works for me is to finish the Windows process and wait for it to go up slowly... I had to increase my RAM to 32GB because that process just consumes everything!!!!!

I assume using "restart" (actual restart, not hibernate, sleep or shutdown) doesn't fix your issue so I'm going to give you the official steps to reverting the driver back to something more stable, 'cause people deserve to be able to use their computers with some stability!

How to Disable Automatic Driver Downloads on Windows 10

Second:
(Copied from Reddit thread about this issue)The Intel HD drivers are at fault. As I was recomended in the comments below, download the intel HD 24.20.100.6286 drivers, download Wagnard's DDU, install it, boot in to safe mode and use it to remove the intel drivers, reboot as recommended and install the intel drivers, restart, shut down, then boot in to Windows normally a your issues should be solve.

A similar problem, sometimes the process uses less than 1 GB, and in rare cases it can take all the free memory.
Basically, the process consumes 50-150 MB.

Fixes
- We fixed a memory leak that could result in DWM unexpectedly using a lot of memory over time.

So I will check this the next days.

But I don't ready use dev version and planning return to stabile.

(Use the developer version at your own risk)

If someone also installs the developer version, could you upload the new version of dwm.exe?

Well I sure hope either MS or Intel sort this out!

I just received a Dell G7 7700 laptop, and was shocked to see DWM hitting 2Gb in Task Manager.   Now I'm wasting hours of my time wading through 7 months of comments at MS and Intel forums looking for a fix. 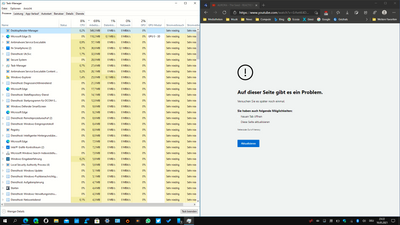 Same issue; been while. I'd like to add sth. I'm afraid this is off-topic, but I thought these might be related:

When I put the notebook into hibernate, I'll get "DPC_Watchdog_Violation" error, right after turning it on.

When hibernation is enabled in control panel: power options, even when I shutdown the PC, error happens at startup again.

Error won't show up if I disable hibernate in power options.I struggled so much to solve the issue w/o disabling hibernate, But couldn't.

I'm going to have you run a few things and see if it you still get the DPC_Watchdog_Violation bluescreen if that's okay.

Then do the following
Go to search (right click start and click search)
Type in CMD, right click it and run as administrator
Enter the following: sfc /scannow
Let that run and finish

SFC might list errors which I want you to google how to fix them if you get any.

Then try and see if you get the watchdog bluescreen?

I just added 2 new DWM dumps to my collection, for a total of 14 dumps from my PC now.

The link is still the same : https://1drv.ms/f/s!AhNGmCtr4NeUpKAfbIiKziUjkcFBrA

Those new dumps were taken when the problem was clearly present, with DWM taking up to 4gb of my RAM. I only have 8, so that was a huge problem. My PC is a LENOVO Legion Y530-15inch-1060.

I think that I gave enough of my time and my dumps to intel now, there is nothing left I can do. My job is done, their turn now.

I sincerely hope they will do something one day for this issue, this is getting more and more incapaciting every day.

I also hope that Intel will tell me when they have downloaded my dumps, because I can't keep that on my limited onedrive space forever.

Thanks for having read me, and have a great day everyone.

Newer build than in Windows dev channel, maybe worth a try...

coming with great news guys. I just fixed the problem
first of all I downloaded a program called Driver Store Explorer that I used to completely delete all the graphic drivers  and then I installed the latest drivers version 27.20.100.9466 and the problem was automatically fixed. a few hours later Windows started downloading display driver in the windows update and after installing the update my intel driver went back to 27.20.100.89xx and the problem was back again, I tried installing the newer driver but the problem is still there so I reused the program Driver Store explorer and deleted all inel graphic drivers and installed the latest and it's fixed again. so I stoped the windows update for the time being until Microsoft find a fix for this

@Johnny2 That is totally nonsense. Like said countless times on this thread. The issue isnt just happening on its own. You can reboot the laptop, and have not a single leak over 10 hours using the laptop, watching videos all day in Chrome. No leak. Or even for days, if you never suspended the laptop in between.

You have to more see it like this, that some event happens, and that event causes a broken behavior of dwm, afterwards the leak to happen, until you reboot Windows.

And that event is mostly connected to standby or/and hibernate.

Like said countless times on here, no 9466 doesnt fix the issue.

The only hope so far is the insider fix of last days mentioning a fix of dwm memory leak. Unfortunately that is for 21h2 and not 21h1 it seems, which would mean, no fix until late of 2021 maybe around October.

DDU is the way to remove all older drivers: https://www.guru3d.com/files-details/display-driver-uninstaller-download.html