I'm turning off "Let Windows try to fix apps so they're not blurry". Now I got average 40-55MB of usage.

Where have you been all my life?

This is the ONLY thing on this forum that has worked.  It grew to 75MB and stayed there.  Way better than 2GB.

EDIT: On the next reboot we're back over 1GB after an hour.  That was a waste of time. Remains unfixed for months and between Intel and Microsoft, nobody seems to care.

Only downgrade uses 27.20.100.8476.But will be forced to update automatically after a month

After a few days I'll notice DWM.exe using a lot of Committed memory, sometimes up to 6 GiB.

I believe it only starts to happen after a sleep cycle.

What did not help:

I was lucky enough to catch the issue as it was happening, just now. While I was watching a Twitch stream in Firefox, the memory usage of DWM would constantly grow by 1-2 MB/s, and if I paused the stream, it would stop growing. Maybe watching any type of video in a browser is affected, I don't know. Let me know if any of you affected people are/aren't using Firefox. Might be a factor here. (In any case this is not a browser bug, it's definitely a DWM or a driver bug, but it might be triggered by the behavior of a browser in this case).

What I did then is try to capture memory allocations with UIforETW as described here: https://randomascii.wordpress.com/2015/04/27/etw-heap-tracingevery-allocation-recorded/ While it seems I cannot capture heap allocations since it requires dwm.exe restart, I can see "VirtualAlloc Commit Lifetimes" that seem to indicate allocations that were later not de-allocated.

(I can maybe make dwm.exe heap allocations work if I change its settings in the registry and reboot? I'll try that maybe)

See screenshots below. This is a capture of 23 second period where DWM memory usage was growing.. You can see on the graph that it allocated 35 MB of memory (and did not deallocate it as far as I understand).

I added Commit Stack column to see where the allocation did happen. So I guess DWM uses d2d1.dll (Direct2D rendering, probably because Firefox uses it), which then triggers d3d11.dll code and it eventually gets to igd10iumd64.dll (Intel's driver DLL) to draw the stuff on screen. That's the DLL that allocates memory.

While we can see function names of the Microsoft code (since I loaded in the symbols), the names for the Intel DLL are not available. If symbols for Intel are available anywhere, let me know.

I will not share the trace file since it has my private data, but I hope these call stacks might help someone on the Microsoft or Intel side, if anyone's reading this. If you have any questions, I'll be happy to answer. 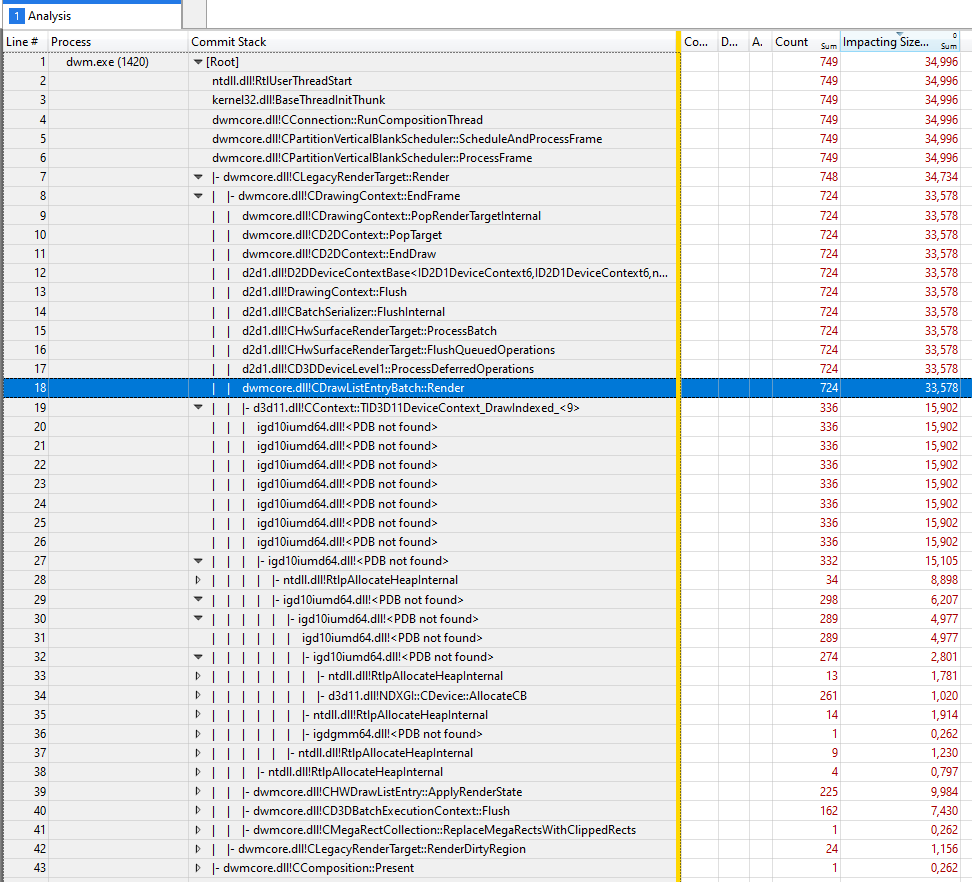 Check out: How to add driver symbols to Visual Studio

@Stefan3D thanks, but it seems they are only hosting .DLL files, however Windows Performance Analyzer is looking for .PDB files.

Another user chiming in with my own machine exhibiting the same issue. Mine only started after updating to the intel display driver from late January. It seems okay for a few hours but after resuming from sleep I notice that the memory usage skyrockets for the DWM. This laptop has that new "Modern Standby" ability, not sure if it's related or not. 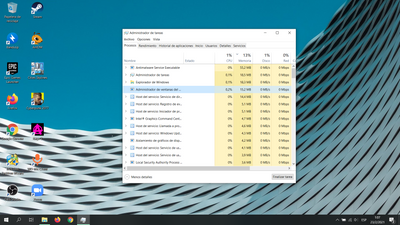 Oh I suffered from this for quite a time

Surprisingly, the latest Intel BETA igfx_win10_100.9313.exe driver did solve it for me. For around 3 days I'm seeing that dwm doesn't exceed 200 mb and does not invoves GPU to its activites anymore, when earlier it could take 70% of GPU power for no reason

Maybe will help someone: https://downloadcenter.intel.com/download/30248/Intel-Graphics-BETA-Windows-10-DCH-Drivers

If LTSC 2019 has no memory leak, this might indicate such memory leakage is also related with Windows 10 update as well. LTSC 2019 is a build based on 1809.

My personal laptop updated to 20H2 directly from 1809 on 10/30/2020. Window update automatically updated my graphics driver to 27.20.100.8587 and the problem occurred. I didn't spot the problem until 10 days after so I didn't have a chance to roll back to the previous version. I just browse through the entire thread again and all of us are using 2004/20H2. Perhaps anyone with windows 1809 could test the latest driver and check if my hypothesis is true.

However, even if there is no memory leak in 1809, it is hard to say 1809 is completely safe, given the fact that intel staff couldn't reproduce this memory leak issue with 2004 and 8681. We still don't know what triggered this problem, otherwise we could help our intel staff to reproduce the problem. It seems that not everyone is experiencing this issue, or has not discovered this issue yet. But for us, every time we start our machine we find memory leaks, and this is why we gathered here.

Fun correlation(might be) that I found: At the beginning of this thread, we thought only those computers with Nvidia graphics cards were experiencing this issue. I assume the reason for this might be that those users with Nvidia graphics card are using more memory intensive porgrams and therefore more concerned about memory usage than users without such cards. For an ordinary users, he or she might or even notice this issue or restart the computer only when it feels laggy without looking for what might caused it.  I suspect that this bug may exist more widely than we thought. 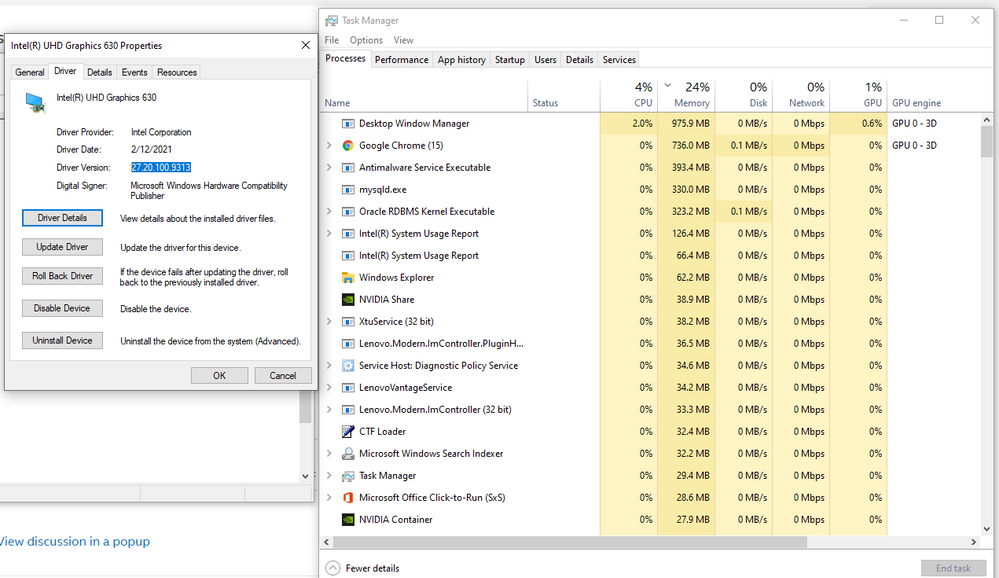 @Ken_Lei and neither for me anymore, well partially, acts weird - RAM usage either going up or standing still for the entire day. Yep, this isn't a solution.. Hope Intel will ever notice this

I apologize for not replying sooner, yet rest assured that we have been monitoring this thread/issue closely.

Currently our recommendation still stands as before i.e. report this directly to Microsoft particularly because we don't have a reproducible case yet, and the bug only appears to affect a relative small subset of users/configurations.

From our side, I would appreciate if you can provide the dump files (different dwm sizes such as minimum, mid range, and very high) and while I can't promise any outcome I'll have our devs look into it.

The instructions to pull the reports can be as follows:

The dump will be easy to find, this message pops up after completing. Per example:

Thank you for any help you can provide us with this one.

This is again very sad...

mafroin
Beginner
274 Views
As you said, using version 27.20.100.8476 looks like the best solution for now. I think intel made fault with the latest versions of drivers. For now, you can roll back your drivers. I hope they will fix it.
0 Kudos
Copy link
Share
Reply

I have the exact same problem. It usually starts after 2-3hr of use, I think it's a driver issue. I rolled back to OEM version from late 2019 and now the issue is fixed. They should look into it.

Thanks for the suggestions Ronald.

Below is a link of two dump files you requested, each one has a suffix which indicate the memory usage in task manager at the time the dump file was created. I've also included an SSU output from the time that memory usage was very high. Hope this helps.

The problem with the suggested dump files is, that without exception the ExceptionAddress is always 0

Where do you want to start disassembling?

Registered for this forum just to leave a feedback here: using a razer blade with Graphics 630 and tried the version 7985 9316 9168 & 6577(factory version), but all produces this leakage. I even installed all intel drivers to factory version but still no help. Now I have to reboot or restart dwm every half an hour to keep things from crashing.

For those who are using the TranslucentTB for taskbar, try kill it and see if the leak is gone. I'm on the latest dev build of windows (21327) and if I quit TranslucentTB, all the problems are gone.