The issue we've experiencing since the start of 2020 only, is that after (randomly) mixed periods of time, but always outside the visibility of the user (screen off and/or user away from desktop ie. never during system operation) - we will return to a completely black/blank screen be that with the monitor on or off (even after powering back on).  Upon powering the monitor back on after inactivity, the bubble effect screensaver is no longer running.

No attempt to refresh (mouse movement/turn screen on or off again) will awaken the screen, and often the next step (if turned back on) is to see the Samsung SyncMaster 2032BW poll interminably between Analog and Digital to try and find a signal before failing every time.

Oftentimes, this can be occurring whilst the desktop is appearing to continue to play the music from either a game or Spotify in the background - almost completely unaware of the monitor/display situation - so my assumption at the moment is that the screen/display adapters crash out whilst the main system continues on happily.  But as we can never recover from the black screen - we have yet to actually prove that.  We always have to restart the machine to get it back up and running again; whereupon the picture appears clear, no blips or glitches and can often run on again for another several hours unhindered (all connections to the monitor are safe and secured throughout).

Searching in the SysInfo pane, I can see the following messages within the Conflicts/Sharing area: 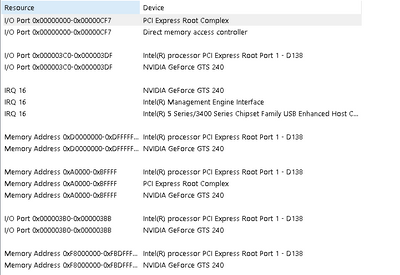 So it would seem that the Intel Graphics chipset and the NVidia card are having their differences around IRQ 16 - but I have not managed to find out any more than that.  I have tried to reverse the current driver for the PCI Express within the system (thanks to another similarly themed thread on this Community Forum) - but I believe to no avail currently.

Has anyone seen or had this screen based behaviour happen to them or others before?

It always occurs when the system has been running for a few hours minimum (either standard apps, browser session(Chrome) or a game (Minecraft/Uno) running) and then when you return you discover it - with system noise as before (fan, etc) or music unaffected by what happens to the monitor signal.  Important note - if you do leave it in black screen mode for awhile, or try to reawaken it 'too much' the fan noise or operating noise (sound) can catch and then just go monotonous indefinitely (so we then reboot).

One new issue I have noticed as part of posting this request, is the extraordinarily long (and hard to read) Device Encryption Support message in the screenshot below - where the system seems to be mentioning something about Modern Standby; but this could be completely unrelated. 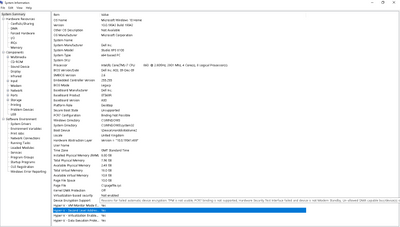 I enclose the Windows Logging from the last few days (during which the screen blanking occurred) in case you can spot anything obvious within... 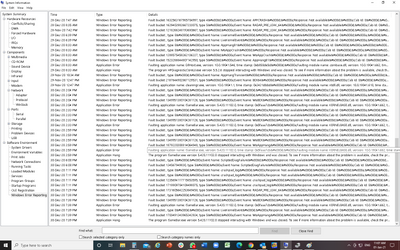 Thank you for all of your time and consideration - look forward to hearing your thoughts and insights.  Happy New Year 2021 to you all!!

I am not sure any of this helps. It feels to me like the you have a failing graphics card. Finding a replacement, one that works with such an old BIOS implementation, will be difficult. I see one on Amazon.com for US$100. I suggest that you find a graphics card to borrow to verify this before making a purchase.

Psylander
Beginner
312 Views
In response to n_scott_pearson
Thanks for the suggestion, have bought a cheap, matching replacement video card for under £30 here in the UK. No black screens since my post - typical, so going to keep watch for now!

Thanks Scott for the support!
In response to n_scott_pearson
0 Kudos
Copy link
Share
Reply