Brightness is changing to 100% when restarting

Whenever I restart my computer with pluged-in, Display brightness is changing to 100%.

In windows Display settings, it shows brightness value to 20%. but display is 100%. windows settings isn't updating until I change the brightness with Fn keys.

This issue started when I upgrade to windows 11.

I don't understand whether this is a Windows problem or a BIOS problem.

I attached the DxDiag file.

Thank you for posting on the Intel®️ communities. In order to have a better understating of the issue, please share with us the following information:

Open the application and select "Everything" click on "Scan" to see the system and device information. By default, Intel®️ SSU will take you to the "Summary View". Click on the menu where it says "Summary" to change to "Detailed View".

Thank you for response.

I tried all the settings in Graphics Command Center. but there is no any Display brightness settings found.

I tried with BIOS Factory reset. but the problem is same.

This issue occurs only when restarting.

Please try performing a clean install of the graphics driver using the latest driver version available for your system, you can find it in our download center.

In order to perform the clean install, please follow the steps in our article "Clean Installation of Intel® Graphics Drivers in Windows*".

I already done that, but in another way.

I restated in safe mode. And I uninstalled display driver with Display Driver Uninstaller. (Clean and restart)

I Checked Windows Update. After few seconds some updates are started to download and install... 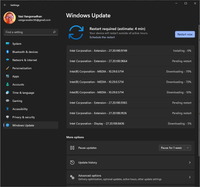 After that, in this picture currently downloading updates aren't installed. (Said another update is processing.)

After 100% of downloading I restarted the PC. Brightness is 45% as I set before restart.

Notification appeared to restart. I restarted again. Brightness is still 45%.

Then, I set the brightness to 20% and restarted. AGAIN Brightness is 100%.

I tried both of Intel Driver & Driver which is downloaded from windows update, the problem is same. Brightness is 100% when restarting.

Please try performing the clean install using the steps provided in our article since we cannot ensure that 3rd party tools will work as needed in order to perform our troubleshooting processes.

I uninstalled and reinstalled the display driver as per your instructions. After finishing the installation, it asked for a restart.

So I did restart my pc. Brightness is normal. but, when I signed in, the brightness was changed to 100%.

Then I adjusted the brightness to 20% then restarted. brightness is changed to 100%.

I adjusted the brightness and again set it to 20% and restarted. Now brightness is normal (20%).

Then again I adjusted and again set to 40% and did restart. Now brightness is 40% (Normal).

So, it's happening when the brightness value is changed in the second restart.

In order to continue with the assistance, please share with me the following information:

Also please provide me with the exact steps in order for us to try to replicate the issue and search for a possible solution to your issue.

No, This issue started when the first restart of the process of upgrading to windows 11.

Thank you for the information provided, in this case, since the IGCC doesn't have power settings, it means that the OS is the one controlling the brightness of the system.

Please try changing the power plan on Windows* from "Dell" to "Balanced" and check if the issue persists.

Also, please try using the driver provided by Dell, the difference between their drivers and the ones we provide is that they customize and optimize the driver to work with your specific system, while Intel drivers are generic and intended to work with all systems regardless of their brand.

In case the issue persists even when using the drivers provided by Dell, our recommendation is to contact them in order to get further assistance since the OS is the one controlling the settings instead of IGCC. This could be caused by limitations placed by the OEM or by a configuration done by Dell where the brightness is only controlled by the OS.