We thought we would try to re-report the bug involving the GL_SELECT issue.  We found a Desktop that shows the issue (it is a Dell Precision 3620 with Intel HD Graphics 630).  Previously we submitted this and you stated you were unable to repeat the issue.  We were using laptops at that time.  The only desktops we could find were really old and did not show the issue.  This relatively new desktop shows the problem with a driver dated 4/11/2020, version 26.20.100.8142.

The application is attached to the previous bug report.  We can provide 64-bit applications.  Previously you provided a link to a developer resource, I passed this on to our programmers.  We really would like this issue fixed.

Let us know how we can help, e-mail correspondence is best for us if that is possible.

P.S.  Here is the link to the previous bug report: https://community.intel.com/t5/Graphics/OpenGL-crash-using-large-array-in-glRenderMode-GL-SELECT-on/... 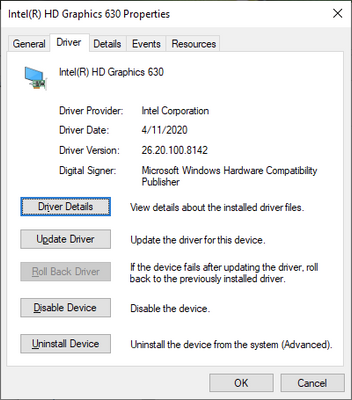 I have run ssu.exe on the machine.  The values checked were: "Display", "Memory", "Motherboard", "Operating System", and "Processor".

Let me know if you need more.

Thank you for the information provided. The best option in this case is to continue working with the developer zone to identify a possible issue with the software, we will keep the thread open in case any community member wants to provide more information but it will no longer be monitored by Intel. Thank you for your understanding.

We see this issue on another machine and have an end-user reporting the problem.  The latest machine (in-house) is a Dell Latitude with Intel Iris XE Graphics (version 4.6.0 - Build 27.20.100.9749).  Is it possible for someone to run the OpenGL-103.exe on a similar device with the Intel Iris Xe Graphics to see if it crashes for them?

P.S.  We may also see an additional issue related to polygon strips and picking.  But as far as I know I would report that here.  It does seem like some developer community responses are for graphics driver bugs.  Please let me know or point me to the location in the Developer Zone where I can re-report this bug and another.