Hello,I am facing some problems with the intel hd 4000 driver.Now,I am using windows 10,latest version.Every time i am updating the display driver,the screen goes black and never comes back.The only solution is to boot in safe mode and Uninstall the driver and using microsoft basic display adapter. None of the versions of Intel hd 4000 are working.I have tried versions from 2015-2017-2019-2020,Black screens.Updating to latest driver is not a SOLUTION.I have the latest Bios update.I am using HP 6470B.I checked all the internet for solutions,but nothing.How can i fix the driver,I don't need the microsoft basic display adapter.I can't even use GeforceNOW because they cant detect a "GPU".

So we can have more information about your system, Download, run, and save the results of this utility as a text file:
https://downloadcenter.intel.com/download/25293/Intel-System-Support-Utility

Then ATTACH the text file using the instructions under the reply window ( Drag and drop here or browse files to attach ).

Here is the latest Intel HD Graphics 4000 driver package: https://downloadcenter.intel.com/download/29473/Intel-Graphics-Driver-for-Windows-15-33-?product=814.... This is the package you should be using.

What does 'Black Screen' mean? Does the BIOS splash screen appear? Is it only when you transition into Windows that the splash screen disappears (everything goes black)?

You should NOT be attempting to run GeforceNOW regardless.

NIdee
Beginner
3,835 Views
In response to n_scott_pearson
Hello. Nor the 2015 driver, neither the latest driver works for me. It is not a BIOS issue but a driver one I think.
When I install Windows, the first time, it works until I restart the computer. When the laptop is restarted, the windows animation appears and after that also appear on the black screen, so my laptop doesn't know at all what to display on my screen. If I enter safe mode, I can operate my computer and delete the driver. Should I reverse the RAM modules, meaning RAM plate?Uninstall updates?With the driver,screen goes Black and neither the windows+ctrl+shift+B,ctrl+alt+del works.
In response to n_scott_pearson
0 Kudos
Copy link
Share
Reply

I've reversed the RAM modules and nothing.Still going Black after updating to Intel HD 4000.Something else that I can do? @n_scott_pearson

I have exactly the same problem with a Dell laptop using Intel 520 graphics. Uninstalling the (latest) driver and using the Windows basic driver and it works fine. As soon as I install the Intel drivers the screen goes black.

If I attach a second monitor (using the HDMI port) then the display appears on that. No other displays are found - ie the only display the graphics adapter (and windows) are seeing is the second monitor I have attached.

The BIOS initializes the graphics subsystem to use it itself. This can materially affect how the graphics engine operates. It is thus important that the BIOS be up to date. Unfortunately, because of the costs involved, Dell, like a lot of companies, abandons their products as quickly as they can. In many cases, changes to the Video BIOS (or driver, in the UEFI nomenclature) that are important to their runtime drivers are released by Intel, but, for older products, vendors like Dell will ignore these updates and not include them into a BIOS update.

I am not saying that this is the case here, simply that this is a possibility and Intel really cannot do anything about it. You folk purchasing laptops and desktop system must demand that companies like Dell provide a better warranty (I always suggest 3 years minimum) and that they guarantee BIOS and driver updates are provided for a significantly longer period (I suggest 6 years). Only you, through your purchasing power, can make a difference here. If you are fine with only getting 1-year warranties and being abandoned after 2 years, do nothing. Otherwise, ...

Is any solution to make it work?Changing something in settings?

Nope. If the driver provided by Dell won't work, there little you can do.

I know that earlier you said that you didn't want the basic Windows graphics driver, but this is how I have managed to get a non working laptop working again. This was on a Dell Inspiron 5459 laptop.

I went throught the following process:

Now, it's not perfect, but at least I have a working laptop again. I don't know how long it will last for though.

Further info. I looked at the Dell support forums, and there are loads of people with the same problem. No one really knows what causes it, and it seems to affect all brands of laptop. One example thread is here. About half way down page 3 someone is suggesting it is hardware related.

Windows cannot load the device driver for this hardware. The driver may be corrupted or missing. (Code 39)

Object Name not found.       And the control panel of the driver is not showing after pressing right click.So I am understanding the igdkmd64.sys file is all the trouble.So,now i "can run" the Intel HD 4000 but I can't.If u understand:))) because of the uninstalled    igdkmd64.sys  I can't use the driver but it is installed.So {again} :))) The igdkmd64.sys causes the Black Screen but without it the control panel is not showing and the driver is not "loading" as u can see ahead.Still waiting for a solution for Intel.The PROBLEM is partially solved.Good Luck to all of you with my problem.Remember :Safe Mode and uninstall the igdkmd64.sys !!

I have the exact same problem with the last few windows insider builds on my Lenovo x1 yoga 4th gen 20qf using any of the intel graphics. 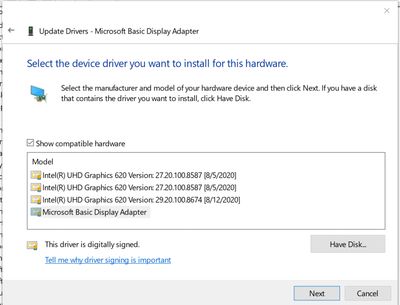 Drive folder with dumps and video of bug recreation: https://1drv.ms/u/s!AtPPWHqmUiZEkEdVnZiVYtH9qSdi?e=gPRpvi

For now, I've just been installing the microsoft basic display adapter over the intel one by temporarily plugging in a second display via HDMI and it stays without the black screen even after unplugging the second display and restart. I think this is a BIOS problem because ever since the latest bios update installed [BIOS Version/Date:"LENOVO N2HET53W (1.36 ) , 07/02/2020 12꞉00 AM], the symptoms arose leading me to believe it may not be the insider preview build and instead the specific bios installed that is resulting in the error.

In any case, the lack of hardware acceleration, brightness control, nightlight, HDR etc. due to the faulty driver and forced Microsoft basic display adapter is maddening as it's been going on for a month straight and is interfering with my sleep among other things.

Same for me using Intel 530 graphics card. I’ve had to roll back via system image Every time I update the driver.

I’ve tried several times & I’ve noticed on the first restart the laptop takes 3 minutes + to reach log in screen, the next restart either takes 4 min + or doesn’t reach the log in screen at all.

It was due to HDR the whole time and the newest insider preview build fixed it! All Intel drivers and HDR settings work again.

"We fixed an issue in the last few flights resulting in HDR monitors appearing black when HDR was enabled."

2) Before installing them, install in your google chrome an addon called chrome remote desktop and install it in your android phone (i don't know if it exists in ios)
Look how to use in youtube it's so easy.

3) Install one of the drivers that you have downloaded, now normally the screen turns black, right?

4) Enter to "Chrome remote desktop " from your phone.

5) Your laptop's screen appears in your phone now, now go to "Desk manager" go to intel driver, click update driver, select the seconds one, then select "choose from the list .."
And install "Microsoft basic ".

7) Normally your screen is back normally now.

😎 Install the second driver that you downloaded (Example: in previous steps you have installed the version of 2015, now install the version 2016 )
The screen turns black, enter to "Chrome remote desktop " (like we did previously) and go to desk manager>intel graphics driver >update driver >the second option>choose from a list... > than choose the driver that you installed first.

Congrats! your screen is back and the intel graphics driver is installed normally

Please, Before doing all of this go to "display settings" then change "screen resolution" to the minimum one, I did it while I was looking for this solution, I don't know if its helped or not xD but just do it to guarantee you did exactly like me and the solutions works