What language would they have used

I stumbled across this little gem, it is correct - checked it with excel -- did they likely do it in Fortran and what algorithm do you think they used?

This paper sets out some of the findings as well from 1967,  this is a big search and overflow would be a real issue 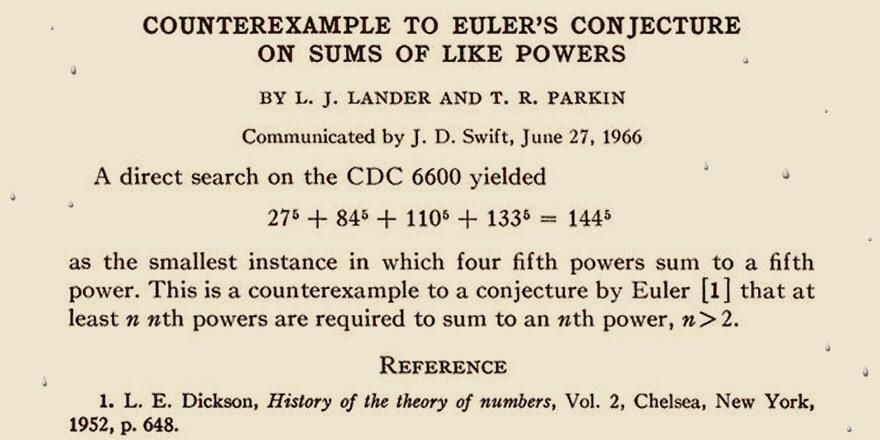 How do I make it threaded to speed up the analysis

Wikipedia has an article on the conjecture, see https://en.wikipedia.org/wiki/Euler%27s_sum_of_powers_conjecture .

According to the article, the truth of the conjecture remains an open question when the exponent k > 5.

The solution that I gave above is a (5. 1. 5) solution, which I obtained from a program in which I started with n = 144 and searched for a few smaller values of n, but it is not primitive, and therefore is not to be found in Table III of the longer AMS paper. If we divide each of the numbers in the equality by 2, the result is the first entry, which IS primitive:

A distributed computing project targeting sums of sixth powers is described at http://euler.free.fr .

I am of the opinion that the Lander solution actually should include 0 to the 5th paper, it is just the zero on the function can be represented with 4 integers > 0, it is really a zero, was one thought .

So I am not sure Euler was theoretically wrong, just a way of expressing the answer.

It is unknown whether the conjecture fails or holds for any value k ≥ 6.

We can show it fails, but I doubt we can prove it is true,  we cannot represent all the numbers in a computer accurately in a time that can be managed - is a suggestion -- proving it by pure math - not sure.

andrew_4619
Honored Contributor I
668 Views
In response to JohnNichols

I would guess looking at number theory will yield some smarter method. But why not to your example with I8  rather that real. Also as a<b<c<d why not have the finding loop i+1, h   and j+1, h etc at least then you look at less combos.

1. which is the bigger potential number the i8 or the double precision

2. Yes, lying in bed last night, I was doing the loops in my head, if I follow your idea I will reduce the loop count by the factorial of k-1.

3. I have a spare NUC I can turn the problem loose on or I can use a supercomputer

4. I was then going to turn the problem loose on 6.

I wanted to test it all the way through - so yes I will put a stop in it.

For some reason I could not insert a picture -- the grey is the fifth order function and the two dots are the first two sets of the four additions.

1. I am of the opinion that lander did not have enough computing time to find the second one-- it took forever,

2. can I represent this number as an integer.

I implemented unlimited length integer computation (add, sub, mul and div). Not very efficient in term of speed but it works.

I was wrong, there are more, they are not common about 1 in a million combinations to the first 1000, after 12 hours I am 135 - not even cracked the

I would appreciate the unlimited integer math

There is a pattern to the numbers all based on 3.  let us see if we find more

There is a simple beauty to them ==

Trick is -- are there any others