ippiHoughProbLine_8u32f_C1R causes a C5 exception (read) on this specific image.  If I flip the image the routine works fine.  I've attached repro information.

Thanks for reaching out to us

We have tried running the source code using command prompt(Make sure that oneAPI environment is initialized by using setvars.bat file) with oneAPI version 2021.3 on windows10 by making the following changes:

we observed that it doesn't throw any exceptions/errors. Please find the below screenshot regarding the output through the command line

Could you please try running your code on the command prompt and do let us know if the issue still persists.

Thanks for you quick response.  I've called this routine with thousands of images just certain images cause this issue and I've provided 1.

I ran the program provided from a command line with the oneAPI setvars called.

I've modified the code to show results and time taken for each image.  With the image that crashes for me it still does just silently at command line and notice no output is returned.  Also you can see it is caught via eventvwr.exe 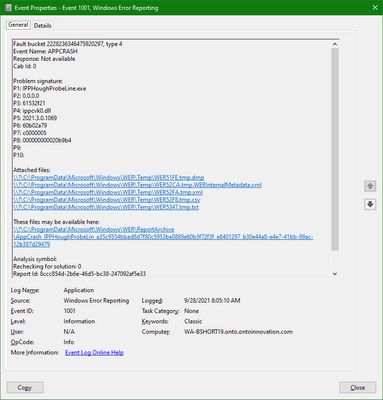 I've attached the updated source file.  I didn't follow your load change to the ATL image class it doesn't compile as is because using unicode and addded the L"*.bmp" failed to load any image.

Through the debugger this is the exception  in ippcvk0.dll

We are working on your issue. We will get back to you soon.

Meanwhile could you please provide us the below details

The compiler used to compile your source code

We confirm the issue on IPP side. We will provide a fix with the next release of IPP. We will notify you once the release is available for download.