I have a DE10-NANO (Soc) board with an onboard UBS-blaster II. But when I go to program the device Quartus Programmer won't find the USB-blaster but it can see the device. 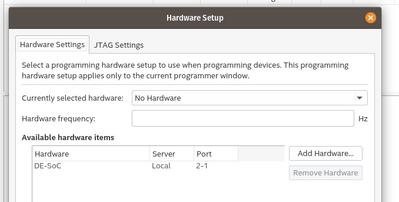 I have tried setting different udev rules according to https://rocketboards.org/foswiki/Documentation/UsingUSBBlasterUnderLinux

But that doesn't work. I can see the device listed under lssub.

Does anybody knows what the problem could be? I have also tried passing it to an Windows VM but there it won't install the correct drivers. I have used it in the VM before so I know it should work.

Thank you for contacting Intel community.