I have a B-550F Asus ROG gaming motherboard with an Intel l225-V. With driver 1.0.1.4 from manufacturer wake on lan works fine. If I upgrade to the manufacturer version 1.0.2.8 WOL stops to work. Exactly same settings on the BIOS, no change. The same happens upgrading to the latest driver available in the intel page for this adapter (https://downloadcenter.intel.com/product/184676/Intel-Ethernet-Controller-I225-V, 26.3).

Has anyone experienced this issue?

For us to further check and investigate the issue, please provide the following details.

Thanks for taking up on this support request. I am currently using this driver version: 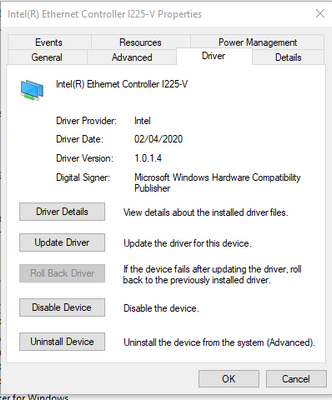 This version is provided by Asus website, and on it, Wake on LAN works fine.

If I update to this version using the Asus update utility as below, Wake on LAN doesn't work anymore:

If I update to the latest driver with the Intel installer from https://downloadcenter.intel.com/product/184676/Intel-Ethernet-Controller-I225-V, doesn't work either.

I tried wake on lan using the etherwake linux utility and the bundle utility from Asus router. With any of the drivers noted that is not 1.0.1.4, wake on lan doesn't work. Attached the ssu, is it fine attaching it here? I understand there is no sensitive information in the file and just driver and hw info.

Thank you for the reply and the explanation of the driver used. Base on your explanation, it seems that the onboard NIC is i225-V has been altered by the Asus. That is the reason why the other driver worked. Have you tried contacting Asus about the issue and if they are going to release a new driver that can fix this issue?

This happens with both Asus driver and Intel driver, so it can't be a modification that Asus made.

Thank you for the reply ]and clarification. Can you try to clean install the latest driver and check if Wake on Lan will work?

Here is the latest driver:

Here is the steps for the clean driver installation:

Thank you for the quick update. We will check on this issue and verify the changes on these drivers. Please give us 2 to 3 working days to provide an update.

Your help is much appreciated!!

I hope this message finds you well. While checking the issue that you encounter, we need to ask you the following details that would help us in finding a solution for this.

Before I answer the questions, is it possible to delete the attached ssu I uploaded? I don't see any option to remove attachments or edit posts.

1.  As far as I tested, it doesn't work on S5 only (soft power off, USB has power and ethernet too)

3. I did to their support but they disregarded it and asked me to report it to intel, also opened a forum post here: https://rog.asus.com/forum/showthread.php?124374-Wake-on-LAN-not-working-on-driver-higher-than-1-0-1...

Also, I hear from a forum member that a PRIME Z590-A (intel based)  so this doesn't seem to be related to cpu architecture. It should be very easy to repro.

Thank you for the quick update. I already removed the SSU that you posted here on the thread.

Can you try other power state and check if WOL will work? This will help us in checking the cause of the issue.

Thank you Michael! Yes, WOL works for S4  (hibernate) for example in any driver higher than 1.0.1.4 including the latest driver from in the intel download page. It seems only affects S5 state.

Thank you for trying WOL on different power state. We need to check this and kindly give us another 2 to 3 working days to provide an update.

I hope this message finds you well. since it is confirmed that only S5 state is affected. Kindly check if this link will help you with the problem. Please make sure that you are using the latest driver and PROSet prior trying the suggestions to confirm if it will help fix the issue.

If you have questions, please let us know. In case we do not hear from you, we will make a follow up after 3 workings days.

Hello Michael, thanks for your time and for assisting on this one. This kb doesn't apply to my situation as:

2. Wake on lan settings are configured in the driver

3. No power saving options are enabled

I still believe this is a driver bound issue.

Thank you for the quick update. Can you try to do a clean install of the latest driver and check if this trick will fix it. Kindly follow the steps here:

If you have questions, please let us know. In case we do not hear from you, we will make a follow up after 3 workings days.

Hello Michael, unfortunately, clean driver installation didn't work. Reverting to 1.0.1.4 made wol work again as described in the beginning of the topic.

Thanks for your patience!

I know it looks like it, but it's most likely not Intel's driver. I have an Asus Z590-i board with an i225-V. I had the same issue, and it was after other updates were ran. You probably need to clear the i225-V's NVM. Unplug your system from the wall for 30 seconds or more and plug it back in. Set your usual settings that worked, and see if that fixes it.

For anyone else randomly hitting this thread someday, to wake from S5 (which is what we're talking about in this thread, I realize people do not read), use this checklist. https://www.intel.com/content/www/us/en/support/articles/000038313/network-and-io/ethernet-products....

HI C128, although I appreciate your help, this didn't help.

8. WOL not working anymore until power is removed to reset NVM, and then only works once till next power plug removal.

Revert to driver 1.0.1.4. Everything works fine with normal shutdown, no need to remove power to reset NVM.

C128
New Contributor I
4,621 Views
In response to solemgar

Now that's interesting. So it did change things for you. It does prove it's not the driver. Because I have an i225v as well, had done system firmware updates (BIOS + Intel ME, etc), which led to your same wake from S5 issue, and unplugging fixed mine permanently. You installed the latest driver and unplugging the power makes it temporarily work. So something isn't talking to something else correctly on shutdown but it's most likely in your UEFI-BIOS. Your board simply doesn't have the up to date firmware code that matches Intel's latest i225v drivers, which explains why you have to run the Asus certified version from their site instead.

Another thing that I'd do- I looked at your board and I see two beta BIOSes, rollback to the latest stable and never run one of those betas for starters. I'd stay on release 2006 (as of 6/20/21) if you're not already. Doing otherwise is just going to introduce more variables.

You have an Intel NIC, but not an Intel platform so updates that can affect your i225v are pretty much completely in the hands of the board vendor. You don't have the Intel Management Engine and the rest which can affect this so it's really not on Intel's shoulders to support it as Asus bought the chip, soldered it on, and isn't "properly" supporting it (if you believe Asus owes you a guarantee on all new drivers from Intel direct will work, which I would disagree with). These are complex systems, yours even more so.

Given as noted that this seems like a UEFI-BIOS or other firmware issue. I would open a ticket with Asus.

That's probably the reason why they have that ethernet driver version on their site. You have a mixed-vendor board, support gets more complicated. If you get an all-Intel setup as I have with my i225v, you'll likely reduce the probability of these oddball issues. I'd run Asus's driver unless Asus can report back to you that the latest version directly from Intel is supported and will work. Trying to force a square peg through a round hole will only result in frustration otherwise. Asus is who you need to be talking with. Good luck.