I have one 38 inch, curved monitor, LG 38UC99-W, that is connected to both a NVIDIA card (GTX660) and the onboard graphics. I only use the NVIDIA for viewing but I also need the Intel Graphics to be installed for various programs (eg: Edius).

My currently installed Intel Graphics version is 10.18.10.5069 but it is corrupt and not installed correctly. If I uninstall it, the only way to get it back would be to restore the computer via a disk image I have.

This is what happens when I try to update the current driver:

I downloaded the driver from Intel.
Intel's assistant says that my computer is compatible with the above version.
When I install via the installer, it says that it's installed successfully and asks to restart.
After a restart, the Intel doesn't show up in the "Display Adaptors." The Device Manager only shows a yellow error under "Other Devices\Video Controller." This is the point that I would have to restore the computer to start over.

I tried in Safe mode as well. Same thing.

When I try to manually add legacy hardware, I choose display adapters/Intel, and the above version is in the list.

When I click next, it tried to install but stops with an error, saying, "The directory name is invalid." (attached screenshot)

I even used Procmon while manually installing but there were no invalid entries.

I also tried to manually install by using "I have a disk." Same issue.

If I then try to install other, older versions of the Intel Graphics Driver, I can't seem to install ANY version. I get the same issue as mentioned above.

Googling status 0x10B or "Intel" "Graphics" "The directory name is invalid" did not find solutions.

I am the administrator and used take-ownership software on various folders that contain driver files but it didn't help.

I also tried DDU to fully remove the old Intel driver & NVIDIA and then reinstalling the new one. Didn't help.

Any advice on how to get the Intel Graphics Driver installed? 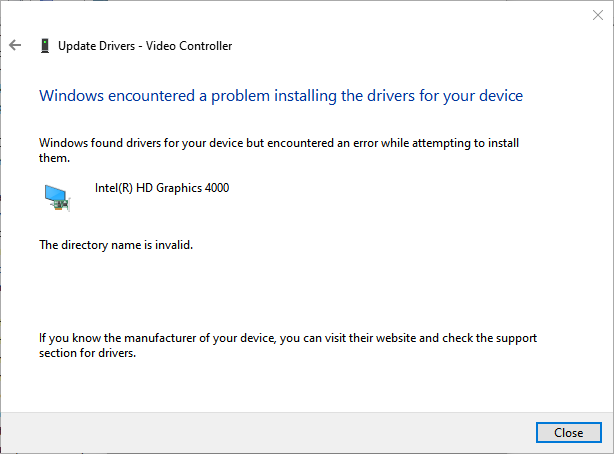 I don't have an "EDIT" or "DELETE" option. Admins, please delete this post.