I want to connect my HP Laptop (that has an Intel HD Graphics 530 , and a NVIDIA GeForce GTX 950M) to an external monitor.

The laptop has an HDMI output port. And the Samsung Monitor I want to connect to has a DVI-D input port.

So I'm using a HDMI cable (male-male) and a HDMI to DVI-D adapter (female-male).

My laptop identifies the monitor and its information in Windows settings, and acts like as if was displaying normally to the monitor. However, on the monitor screen there is no display (no signal detected). 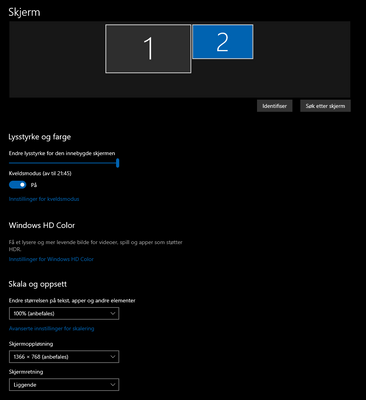 The laptop connects normally to a TV (that has an HDMI input).

A Chromebook (that has an HDMI output), that I have, connects normally to the monitor. So the problem isn't the HDMI cable or the adapter.

The problem isn't due to Windows, since I tried installing Linux (Pop OS) and had the exact same results (second monitor detected but not displaying).

The problem persists when connecting the laptop to another monitor with DVI input port. So problem isn't the monitor.

So... The problem seems to be with my laptop.  And I think it is due to the intel graphics card. (The drive is up to date, also tried downloading the intel version but my laptop didn't accept it)

Is it possible to make my Nvidia Card power my second monitor? (I tried disabling the Inter Graphics Card at Device Manager, but then it stops being to detect the second monitor)

Does anyone have a tip on to how to fix this?

mmmc, Thank you for posting in the Intel® Communities Support.

In reference to this scenario, just to let you know, when you use an adapter or converter it is not guaranteed that the graphics configuration will work for sure, that the monitor will be properly recognized, we cannot assure you that it will work without any problems, even though, as you mentioned, that it is working on another computer. Due to customizations done by the manufacturer of the computer, the adapter/converter that you are using might not work with that specific laptop. Since "The laptop connects normally to a TV (that has an HDMI input)" then we can rule out a possible problem with the video port or the driver. Please verify the link below for further details on this topic:

So, what we can suggest in this case, if you have the option, of course, will be to use a different adapter/coverter, still, we want to stress that we cannot guarantee that it will work for sure. As an alternative, there might be a local repair store/place close to your location in order for you to check if they have adapters/converters in there that you can test to confirm if it will work properly.

Regarding your question, "Is it possible to make my Nvidia Card power my second monitor?" it all depends on the customizations done by the manufacturer of the computer, if the pipelines/outputs for the video ports on the laptop are connected only to the Intel® Graphics controller, then it will not be possible to make the Nvidia card to power your second monitor, for that we recommend to get in contact with your OEM (Original Equipment Manufacturer) to verify that information: