I was able to use my previous TV as a second monitor, but so far I am unable  to get my Windows 10 Home 64 bit Tablet PC to detect my new Toshiba TV, which has 3 HDMI ports. I have tried all 3. The only response I get is 'no signal'. I have tried using Windows Settings for Display and for Projecting. The TV connects OK to my LG Video Recorder, using HDMI 2 port for which I bought a new cable, and I have a 3 meter cable on order for mirroring the desktop even though the existing cable worked with my previous TV. The Intel Graphics Centre on my desktop has not detected the TV.

I was doing some testing Friday and needed a different NUC. I unplugged the HDMI cable - which had been working fine for weeks - from one NUC and then, shortly after, plugged it into the NUC replacing it. All I got was a green flickering screen. The cable had gone bad. Replacing it got things going again.

My point here is that this kind of thing happens. These cables came with a KVM and weren't of the greatest quality (despite being for 4K@60Hz support). Usually, I automatically replace cables such as these, but took a chance this time - and suffered the consequences. Try your new cable and let us know what happens...

The new cable has made no difference.  The TV is not detected as a display via HDMI. I have checked the Adapter driver, it is UHD Graphics 8000. The integral Display on my Tablet PC is HDCP Compatible, High band width. It is NOT 4K compatible. What should I try next?

Hhmmm, I am not sure what you looked at, but there is no such thing as Intel UHD Graphics 8000. What is the model name/number for this tablet? 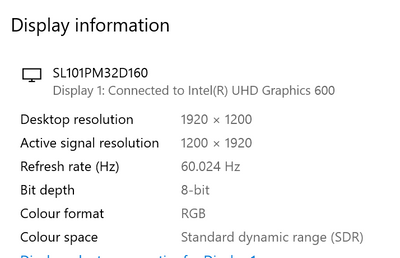 Ok, nothing obvious there (other than I am not a fan of the micro HDMI connector they are using). I will need more information.

Please download and run the Intel System Support Utility for Windows. Select all data categories, generate the report and then have the tool Save the report to a file. Don't try to use the Submit capability; it doesn't work. Finally, using the Drag and drop here or browse files to attach dialog below the edit box for the body of your response post, upload and attach this file to the response post.

I hope this is correct. It looks to me as if files have been duplicated ---- but in fact I got a notification saying the file could not be moved.  If it is not right I will try again.

No, the files were fine (other than you attached two copies of them).

I am not seeing anything obvious in either of these files. Was the TV connected when you ran these? If not, connect this TV and run the tools again.

Another question: How are you connecting this TV. That is, are you using a HDMI cable with microHDMI connector on one end or are you using a microHDMI-to-HDMI adapter and then a normal HDMI cable? Regardless, please provide information about the cable (and adapter, if used).

I do not use an Adapter but am probably going to get one, as the only way to get it working. I have an HDMI micro cable from the PC to a standard HDMI on the TV. Some users say they have the connection to their TV working OK but quite a lot seem to report otherwise --- it is claimed that the micro HDMI is inadequate and does not have the power required (this is beyond me) ---- and there are suggestions I should instead connect with USB using an adapter that makes up for this. I presume standard USB 2 is OK rather than type C 3?

I would be more inclined to blame the quality of the cable. I suggest you try a really good quality cable - for example, one that (at least) claims that it can support 4K@60Hz. Amazon has a well-rated one for only US$12: https://www.amazon.com/dp/B088K8WQ3Y.

If you are talking about getting a USB Graphics adapter, then no, you really, really want to have at least a USB 3.0 connection. One based on USB 2.0 is going to be way too slow. It's the difference between having 480 Mb/s throughput and 5 Gb/s throughput, a 10x increase!

Thanks for the helpful info. I do have a USB 3 port on a hub, but it is plugged in to a Standard USB 2 port on the PC so I understand that would be no good. I have 2 USB C 3 ports on the PC itself, one is for power, but the other could be used, especially as mirroring the desktop on the TV would not be required constantly. So some sort of adapter would be needed for connecting HDMI to USB C plus the HDMI port becomes redundant?

Which brings me to the cable. I can see the possibility that the cable is at the root of the problem but wish I could be more sure. I now have about half a dozen HDMI cables including the one just purchased especially for this job. It was not dear but even so I am reluctant to get yet another, not so much because of the cost but more the inefficiency of ending up with yet more unused cables. The same has happened with Ethernet Adapters, I have four before I got the right one, which still has not solved my Ethernet problem (I cannot get the speed or reliability my ISP promised --'guarenteed'--- I should be getting.)

I am not sure what else I can suggest. If you have the keyboard, you also have 2 USB 3.0 ports on it and those could be used. What is too bad is that the USB-C port does not support DisplayPort Alt. Mode. *That* would have solved this problem nicely.