So it has been a while since I pulled out the old ODE solver for COVID.  The 7th month actually, at that time the solver based on the inputs from late April predicted 135000 deaths by today, we are at 225000 or thereabouts.  So the excess deaths are 90000 which based on a reasonable view of the death costs from the US Gov - is a loss of about 0.2 trillion or 0.1% of the GPD.  Of course the average family only takes home 24% of the average GPD in population terms.

The change occurs at the beginning of September. 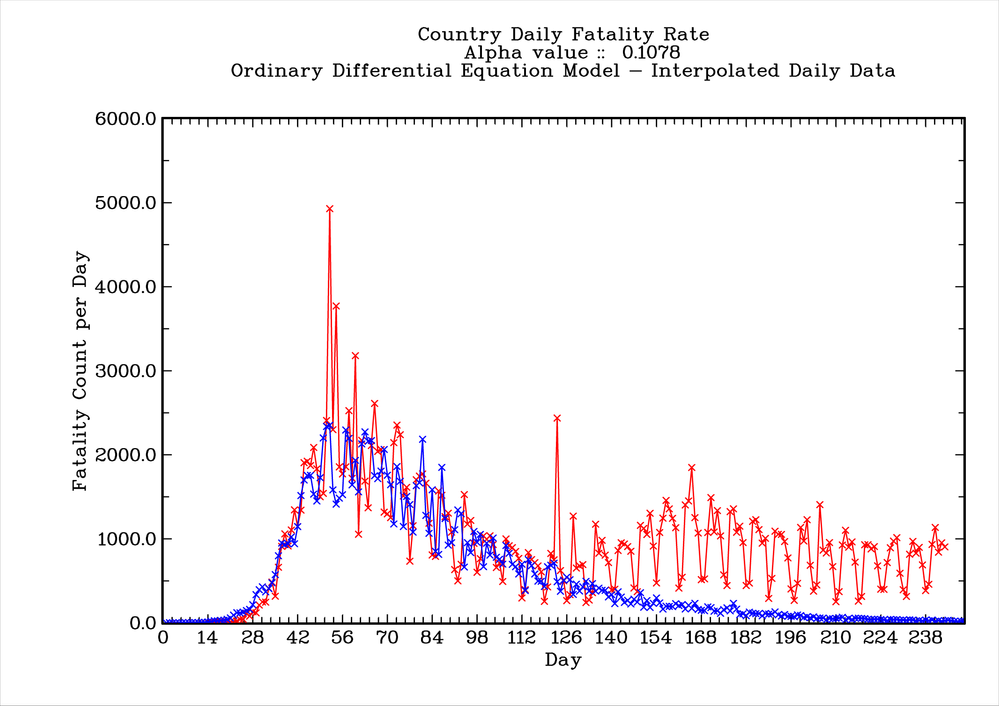 The Fortran fitting algorithm does not work with this current data, mainly because it is to simple.  It worked up day 126, but then it breaks down.

The problem is what statistical method does one want to use, the use of a method that fits each individual day will provide a stream of alpha values and you can analyse them, this is somewhat analogous to the standard methods used with the SEIR model, which means you make the assumption that daily changes in pattern - IE mask wearing is making a measurable change, it is a very attractive statistical assumption, but I think it misses the very nasty use this virus makes of the Central Limit Theorem. The argument is how big are the independent urban areas, and they are certainly bigger than city sizes, and how much does the human changes affect the constant values with time.

it is an interesting problem, at least it is moderately easy in Fortran.  The only problem was a computer change and getting DISLIN to work again with VS and IFORT.  it is always a battle to get all the settings correct.

Why do we have a default project on VS for IFORT that is 32 bit, when windows is pure 64 bit?

I have an alert program on a bridge in Iowa.  it reports on high accelerations, so I added a tweak the other day that sends a note saying - it was very cold last night - can I have a blankie please.

John, are you accusing a virus of claiming "I know more about the Central Limit Theorem than any human since Pythagoras" ? The thing does not even amount to a cell, let alone a brain!

The SIR and other such models are useful and worth studying, but are in no way realistic models for something as complex as a global pandemic. The SIR model has a state space dimension of just 2 (since S+I+R = 1). As we have all learned over the past months, there are large variations from one locality to another as well as temporal changes in social response and protection measures, etc., none of which receive any role in the SIR model.

I spent a few enjoyable  hours yesterday playing with my new computer and Intel Fortran.  I have been working on a lot of FFT and accelerator data and it has become quite boring, so I just wanted a change.

The ODE solver for the COVID deaths seemed like a nice distraction for a day, as I had only been vaguely watching the deaths and the case counts, mainly listening to a continuous stream of CNN, plus on Friday an interesting student showed me some of the issues in teaching people how to develop Water Supply models, so I have some required work on a manual. The interesting observations for Fortran people who use txt files as input were: 1. the students had some problem understanding TXT files.  One of the lines in the input has >>  20  0 at the end. A number of students changed this to  20.0, which took me a few minutes to work out.  2. They had some challenges with understanding how to do X and Y co-ordinates in metres for a street system.  It took a few minutes to work they were using the GPS lat and long data as the X and Y.

So back to COVID, in the deepest sense it is a game, like any other NASH game, the virus has an inbuilt set of rules and while it lives it follows the rules. If you watched the recent Netflix show Queen's Gambit, you could observe the rather brilliant performance of the two young ladies who acted the main part from age 9 until age 22 or thereabouts as they learnt the rules.  One of the premises of the movie was the main character could do a Watson and look far ahead. Granted there are no life and death issues in chess, but with the COVID virus there are, but the similarity is astonishing, the life or death of the king in Chess or a human with COVID.  We measure Chess masters by the win-lose rule and in the end the COVID virus goes the same way.   But like all human data it is imperfect.

However, the human knows the rules of the game and can alter them.  As an extreme, I move to a high alpine area and stay away from humans I am out of the game. But in looking at the outcome, deaths in the USA it appears to be stable since September, given the vagaries of the system as close to stable as we get.  Some reasonably simple statistics shows that the USA is not a homogeneous area, but it is made up of a finite, probably less than 20, number of relatively independent urban areas. Each urban area should appear as one complete unit to the COVID virus, surrounded by essentially space, but within the independent urban area there is sufficient interchange to make how the area humans react as the primary determinant of the  outcome in the area.  We have the secondary problem of the interchange between each independent area, we cannot shut down the world, but this is slower and lower.

I do not need to enumerate the 20 areas, it is a trivial task with GPD statistics and sufficient time and money. However, our modellers are mainly interested in selling services to counties, cities, states and the US government, so their analysis is driven not by the real boundaries the virus sees but by political boundaries, which were mainly completed in the 16, 17, 18 centuries with no regard to much beyond politics and geography.  So we have instead of 20 independent rule following regions, about 5000 rule following regions that follow different rules driven not by the need to cut down the deaths but by political constraints.  However, we as humans know how to solve this problem, the Air Lift in Berlin shows us how and that we can do it.  Canada and Mexico and the other countries have however, pretty well succeeded in isolating the USA, so we have 20 areas, each with about 175 different counties to use a simple number.

The rules in the 20 regions are ever changing as we try and balance the economic loss against the human loss, i.e. do I put in traffic lights or roundabouts or leave the cross intersections. The correct answer is of course roundabouts, we know this statistically, but how many roundabouts are there between you and your favourite grocery store.  So now we have 5000 regions with varying rules and other human failings and the virus just keeps challenging the rules and we make dumb mistakes, so in the end the average statistics takes over and so we are driven to the CLT.  We are humans, we cannot agree on anything that is what makes us so predictable the CLT.

The figure I put up to start this post is a classic CLT, we are changing our behaviour now, but because of the cold we will make more mistakes that the virus likes.

Imagine if 10000000 billion little green aliens had invaded earth and were killing humans, we would fall back, surround them and attempt to kill them, even if it meant nuking a part of the earth into the stone age, aka Chernobyl and Fukashima,  but we do not treat the virus with the respect it deserves, so we lose.