I'm looking at some code that for repro-sakes I can reduce to this:

Why is rslt -4.0 ?  How does the compiler determine that I want

The minus sign just confuses me here ... can somebody point me to a Fortran standard for how this is evaluated, or is this a compiler standard?

That page is simply wrong. Here is what the standard says - note the example that is exactly your case. 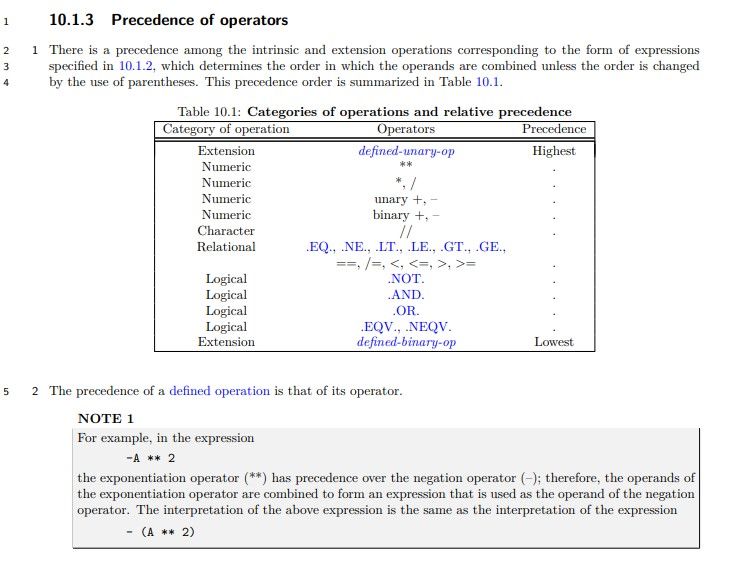 google "operator precedence fortran" and you will see that exponentiation is executed before the negation in the absence of parentheses...

Says "Logical NOT and negative sign" takes precedence before Exponentiation, and this contradicts what I'm seeing.

That page is simply wrong. Here is what the standard says - note the example that is exactly your case.

I should also point out that Fortran differs from some other languages in how it treats things such as -2.0.  This is not a negative 2.0 as a single entity, it's 2.0 with a unary negation applied to it. This trips up programmers coming from other languages.

although some say Lost in Stupid Paratheses'

Interestingly enough, if I were to see the expression "-2.0**2" (or the like) in a mathematical context, I would interpret it as "-(2.0**2)". In maths notation is everything, including precedence.

I have sometimes wondered why the creators of Fortran chose to deviate from mathematical conventions in what the expression a/bc means, for real variables. In algebra, it means 'a' divided by the product of 'b' and 'c'. In Fortran, a/b*c is the same as ac/b, assuming no overflow, etc.

That's simple - and most other languages I know are the same. "bc" could be a distinct variable. Keep in mind that blanks are ignored in fixed-form source.

I recall from my college days that the compiler we used, PL/C (a PL/I variant) tried to "fix" syntax errors, including replacing "b c" with "b*c".  In order to recognize "bc" as a multiplication, the compiler would have to know that all variables are single letters and that b and c were previously defined. Fortran, with implicit declarations, couldn't do that.

Of course, an accommodation had to be made for variable names longer than one character, and it was necessary to show the multiplication operator explicitly.

What I wanted to say was that, to be consistent with the conventions of algebra that have existed for a few centuries, in Fortran, too, a/b*c should have stood for a/(b*c), not (a/b)*c.

A few years ago, I had stated the same question in a forum (possibly here), and Walt Brainerd had replied that he was in agreement.

However, anecdotal evidence suggests that reverse Polish notation is more difficult for users to learn than algebraic notation

In moment of inertia calculation you get the A*y*y  - if you use an excel chart or Fortran you get some negative y's, so it makes it interesting to teach -- I had to explain that the -y is the number squared not negative y squared.

This all leads into the topic of defensive programming. After having a number of 'trips' going from language to language - and especially to C++ - I got in the practice of explicitly including the brackets (or braces, whichever you prefer to call them). Some of the folks I worked with used to complain about me doing this. Too bad; better safe than sorry.

More than defensive programming, it is actually part of documentation of the source, stating clearly what the programmer intended.   Always a good practice.

5. Forth is for real nerds