NUC11PHKi7C wake on LAN not working

I've been trying to wake my NUC11PHKi7C by sending wake-on-LAN packets, but it's not responding to anything. I've tried sending packets to both the ethernet and WiFi NICs, and I have validated that the packets are reaching the system using Wake-on-LAN monitor.

I've followed all of the instructions here - Configure Wake-On LAN for Intel® NUC and Intel® Compute Sticks - except for the ones that require making changes in the Power Management tab, as that tab is not displayed when I open the ethernet adapter properties.

I found this thread - Solved: NUC10i7FNB Wake on Lan won't work - Intel Communities - which suggested that I could access the Power Management tab by setting Sleep Type Support to Legacy S3 Standby in the BIOS. But there is no option to changed Sleep Type Support in the NUC 11 BIOS (probably as it does not support legacy boot).

All drivers are up to date, and I've disabled Fast Boot in the BIOS and in Windows.

The system will not wake when sent Wake-on-LAN packets from any state (sleep, hibernate, off).

This is a significant issue for my use case, so I'd appreciate any support for getting wake-on-LAN functioning correctly with 11th-gen NUCs. Thanks in advance!

A new BIOS update for NUC11PHKi7C with a fix for this issue has been posted externally and is available at https://www.intel.com/content/www/us/en/download/19729/bios-update-phtgl579.html, this is version 0067.

It will enable WOL in Sleep (also known as ModS) in Windows* 11. WOL from S5 (Shut down in power menu) is also supported, while WOL from S4 Hibernate is not supported. The below picture is true for Windows 10 and Windows 11.

Please give it try and report back if you encounter issues.

Open the application and select "Everything" click on "Scan" to see the system and device information. By default, Intel SSU will take you to the "Summary View". Click on the menu where it says "Summary" to change to "Detailed View".

Wake On Lan has never worked for me with this NUC. (I have used WOL on many other systems without issue, but it's been a problem on this NUC from day one.)

Can you please tell me what WOL (Wake-On-Lan) tool are you using? I would recommend trying WakeMeOnLan from NirSoft. We tested it and we know it works on NUC11PHKi7C with Windows* 10, it successfully wakes up the system from S4 and S5. You also need to disable (uncheck) fast startup and enable (check) Hibernate in Windows power settings. 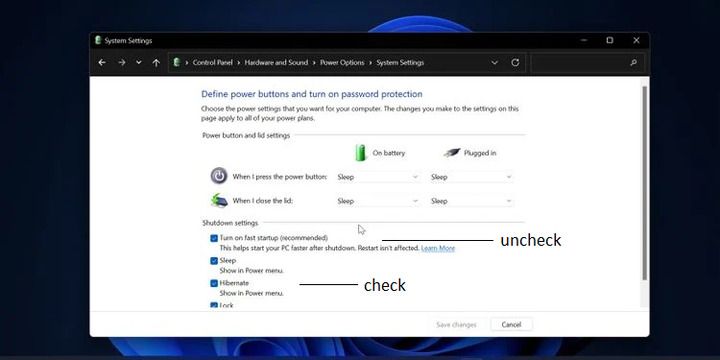 Hi Ronny - thanks for the response.

I'm using a range of Wake-on-LAN tools, including the Wolow iPhone app, a Wake-on-LAN Alexa skill, and the automated Wake-on-LAN functionality in Steam Link. As I say, I've validated that the NIC is receiving the WOL magic packets when the system is booted (with all three methods), so the tool I'm using is not the issue.

I don't have Hibernate checked in Windows power settings - I'll try again with that enabled.

I'm also using Windows 11, rather than Windows 10. Is there any reason that would cause an issue?

I asked you for the tool that you are using so that we can try to replicate using the very same tool.

In regards to Windows* 10 or Windows* 11, we are about to test Windows 11 and I will get back to you with the results.

Is it possible and only for testing purposes that you try WakeMeOnLan from NirSoft?

I've enabled Hibernate now (fast boot has always been disabled) but the NUC still isn't waking from any suspended states when it receives a WOL packet.

I can consistently reproduce the behaviour, including when I use NirSoft WakeMeOnLan:

Some more information after further testing with WakeMeOnLan and other network monitoring software.

When I hibernate the NUC:

Thank you for the information provided, we are currently investigating the issue. We will post soon with more details.

Hi Josue/Ronny - any update? I've been continuing to experiment but no luck.

After finding no fix for the issues, I downgraded to Windows 10 following Ronny's assurance that WoL has been tested on the NUC with Windows 10 ('We tested it and we know it works on NUC11PHKi7C with Windows* 10, it successfully wakes up the system from S4 and S5'). I have set the fast-boot/hibernate settings as requested above and restored the BIOS to default settings.

Sadly I'm experiencing the exact same issues as I did with Windows 11, namely that Wake on LAN only works when the NUC is in a shut-down state. If the NUC is in any other state (eg. hibernation), sending a magic packet has no effect. The NUC also refuses to enter a sleep state - as soon as I select 'Sleep' from the power options in the start menu, it begins to sleep then immediately wakes.

It would be great to get a solution to this. Thanks!

I guess it is a problem with the firmware. Even with the latest update (0062) it is not working (even worse).

Update, with some positive progress and some further issues.

I was wondering if the issue was with Modern Standby, which seems to be very buggy. So I followed the steps in this post to disable Modern Standby in Windows and revert to S3 sleep: https://community.intel.com/t5/Intel-NUCs/Another-NUC11PAHi7-with-fan-running-during-sleep-mode/m-p/...

After disabling Modern Standby, I tried sleeping the NUC and sending a WOL magic packet, and (drum roll) it immediately turned on. Success! I also repeated the test with Hibernate, which had also started working. (Which is bizarre, because waking from hibernate via WOL didn't work when Modern Standby was enabled.)

Unfortunately the celebrations were short lived, as the behaviour now seems to be extremely unpredictable. The NUC will no longer wake via pressing the power button on an attached USB keyboard, and often it still fails to wake when I send it a magic packet - it either doesn't respond at all and I have to manually press the power button, or - worse - it doesn't respond to anything and I have to fully unplug/replug the NUC in order to get back into Windows, which sounds like the bug reported here: Unable To Wake Up From Sleep Mode on Intel® NUC 11 Enthusiast Kit. It's also stopped responding to wake on LAN packets when fully powered off now, which was never a problem before - it's almost as though the NIC gets into a bad state and can only be recovered through a complete power cycle.

After reading hundreds of posts on the topic, it seems that Modern Standby isn't fit for purpose in its current state, but also that legacy sleep modes are not officially supported and so are extremely buggy. Which is a little disappointing for a system that costs over £1000!

@JosueO_Intel and @Ronny_G_Intel - would it be possible to get an update? I'm happy to provide any logs, reports or diagnostics to look into this further, but currently it seems that the community is having to resolve these problems through trial and error and unofficial workarounds. I didn't realise I was signing up to be a beta tester when I bought the NUC!

OK, one extra update: I've fixed the USB keyboard issue I mentioned above ("The NUC will no longer wake via pressing the power button on an attached USB keyboard"). When I ran a power report in Windows, it showed several errors with Selective Suspend - after disabling Selective Suspend in power options, the NUC woke from sleep/hibernate as expected. I also needed to enable 'USB power in S4/S5' in the BIOS to keep the USB adapter powered while the NUC was 'off'.

I haven't been able to reproduce the issue with the NUC not responding to WOL packets this morning. Will continue testing to see if I can identify a set of steps to reproduce.

OK, the issue is back again. Not sure exactly what steps caused it, but behaviour was as follows:

1. For several hours, the NUC responded as expected to WOL magic packets from all power states ('shut down', hibernation, sleep). This was repeatable consistently over 20+ cycles.

2. The NUC then stopped responding to any WOL magic packets, and could only be woken by the power key on the keyboard or by physically pressing the power button. Again, after first becoming unresponsive this behaviour stayed consistent for 10+ cycles.

3. After several sleep/wake cycles, the NUC then failed to wake at all (behaviour documented here: https://www.intel.com/content/www/us/en/support/articles/000059945/intel-nuc.html). The only way to recover the system at this point was to physically unplug and then reconnect the NUC.

Have you tried the steps outlined here?

It appears though for some NUC models, the newest BIOS releases mentioned in the advisory have not been released yet

@McChen I did try those steps a while ago but no luck - currently out of town so not able to re-validate.

As you say, the latest version of the BIOS available for the NUC11PHKi7C (0065) is lower than the version advised in the troubleshooting article (0066), so it's possible that the fix hasn't been released yet.

i have a NUC11PAHi5 and my WOL doesn't work either. New BIOS isn't yet available for mine either, will have to wait for them to post that before testing again

Even with the patch, the WOL is not working properly (NUC11TN). Only once in a while it is working. "Modern state" is not my favourite anyway. And the "old" mode with hibernate or soft-off is not working as well. Only sometimes it works... for whatever reasons.

I tried it with new installations of the OS (W10 or W11). Always the same problems. Never had those problems before. It seems to be real issue in the BIOS.