I have installed Quartus 20 lite on Windows 10 along with WSL 2 / Ubuntu. The dos2unix function is also installed.

I can run Quartus and compile my design which includes Nios. However, when opening Eclipse and setting up a project, I get a failure on dos2unix as shown below.

Additionally, I did the unzip of the tools in the eclipse-nios2 directory and followed the directions appropriately for downloading Mars2 version of eclipse.

Finally, I run eclipse associated with Quartus 18 just fine on the same version of Windows were I am attempted to run Eclipse for Quartus 20.

Any suggestions are much appreciated. 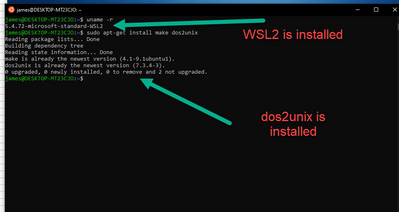 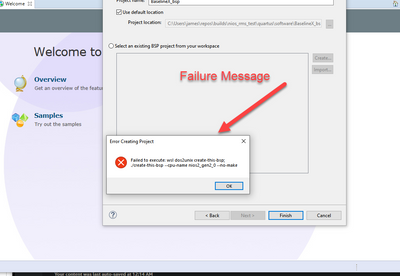 can you try to install WSL1.

Similar to some other posts on the forum which I did find, these are the steps that I did to get the Quartus 20.1 Lite to work on Windows 10:

2. Reinstalled Ubuntu 18.04 - using the the windows 10 icon bar and typing Ubuntu-18 and clicking yes for the install option

Finally after following these steps I could get it to work. I think installing wsl within the Ubuntu command shell on Windows is a little hidden feature. In other words, one must install / configure wsl from the windows command prompt, as well as install wsl inside the Ubuntu shell.