I failed to upgrade my S7200AP BIOS from R01.03.0016 to R01.03.0021. When processing R0021.cap, I got errors like "the capsule file in the update package is invalid" and "BIOS interface failed - this can occur while reading/writing to BIOS flashing ME FW". The package is downloaded from Intel and the MD5 checksum is correct. The product support page does contain a link for the error message but it leads to nowhere, which is quite confusing. Does anyone know how to fix it? Thanks a lot. 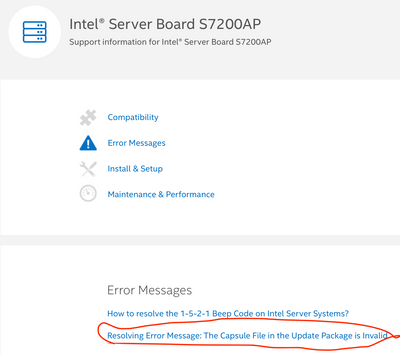 Thank you for joining the Intel community

This is the article it refers the broken link. https://www.intel.com/content/www/us/en/support/articles/000038709/server-products/server-boards.htm...

The catch is that it seems to be specific to the S1200SPLR board. Even though the solution proposed could be applied to any Intel server board. Could you please try and let us know so we can extend the application of this article

I will look forward to your updates

Thanks for the article. So I moved the jumper to the BIOS Recovery position and reboot the server as it said, however, nothing happened in recovery mode. I had been waiting for more than 30 minutes but there was still no signal to the screen. Regarding the "BIOS interface failed" message, could it be a hardware fault?

Did you leave the USB key plugged in when the recovery jumper was enabled?

> Did you leave the USB key plugged in when the recovery jumper was enabled?

Yes, a USB stick with BIOS package and a keyboard was plugged in because the article said to upgrade the BIOS in recovery mode. Is it required to unplug all USB devices when the recovery jumper is enabled?

When the BIOS Recovery jumper block is moved from its default pin position (pins 1-2), the system will boot to the uEFI shell, where a standard BIOS update can be performed. See the BIOS update instructions that are included with System Update Packages (SUP) downloaded from Intel's download center web site. This jumper is used when the system BIOS has become corrupted and is non-functional, requiring a new BIOS image to be loaded on to the server board.

So the USB key containing the BIOS update image should be plugged to the system during bootup. But in case is not the system should boot up to UEFI shell either way. If not the current BIOS image might be corrupted with the inconvenience that the process to get it corrected is not working...

Sorry, I'm a little confused. I had no problem when the recovery jumper is on 1-2 which is supposed to be the default mode, except UEFI complained about the invalid capsule file when upgrading BIOS. The article suggested that upgrading BIOS with the jumper on 2-3 a.k.a recovery mode might resolve it, but there is no activity after I moved the jumper to 2-3 and reboot it with a USB stick and keyboard in the ports. Is this normal?

The behavior you describe when the jumper is set to recovery position is certainly not expected. There might be a chance to get it fixed by upgrading the BIOS using an alternate method (as the recovery jumper method does not seem to be an option). This alternate option si to attempt an Online Firmware Update from the OS using the OFU utility: Download Intel® One Boot Flash Update (Intel® OFU) Utility and the OFU firmware image: Download Intel® Server Board S7200AP Product Family Firmware Update Package

I got a segment fault from the flashupdt binary extracted from UBUNTU directory. Does the OS have to be Debian 8.3? Mine is Debian Buster.

Unfortunately neither Ubuntu nor Debian are supported OS for this system:

Operating System Compatibility for the Intel® Server Board S7200AP...

Do you have any updates, questions or comments in regards to this issue? Please do not hesitate to contact us back. If you consider the issue to be completed please let us know so we can proceed to mark this thread as closed. I will try to reach you on next Monday 26th. After that, this thread will be automatically archived.

We will proceed to mark this thread as resolved. If you have further issues or questions just go ahead and submit a new topic.