Herewith a CPU utilisation graph for a virtualisation host node where approximately 80% of the guest utilisation (cyan) appears as system time (brown):

CPU benchmarks are however consistent on this node, when compared to identical siblings that are performing normally: 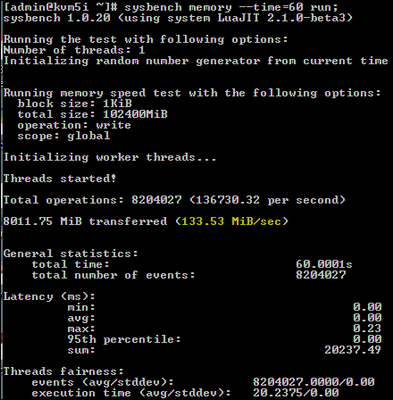 Performance after restarting, remains at this level until either cold or warm booted: 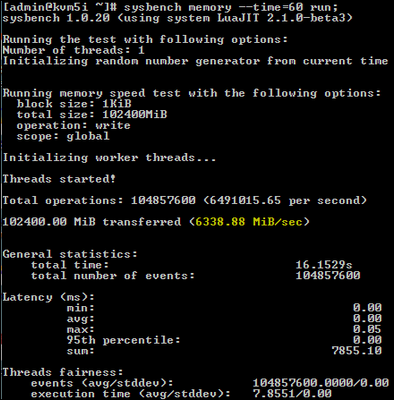 We've set the BIOS to log correctable errors and the system event logs generate no notifications. I presume an initialisation problem as the system performs absolutely normally when we warm boot it (10/15 of those initialise the memory at 6.1 GiB/s).

The platform has been in production a while, this issue is new since we upgraded the BIOS on the 21st of December, the system has operated at full performance for almost 2 years prior to upgrading the firmware.

We have syscfg dumps of the BMC and BIOS, should they be relevant.

PS: Yes, we did reflash, yes we ran startup.nsh twice, yes we reset BIOS to defaults and yes we set KCS to 'allow all' before starting the update process.

Thank you for joining the Intel community.

Thank you for your detailed post. At a first glance I found that both of the modules used:

does not show up as validated under the Intel Server Configurator tool Purley THOL (intel.com) for this system.

Based on that, there are chances that both of the systems (problematic and non-problematic) might exhibit the same issue eventually.

Is there any chance that you could try a validated memory under the problematic system? You can get the validated RAM list under the same website shared above.

I am just following up to double-check if you found the provided information useful. If you have further questions please don't hesitate to ask. If you consider the issue to be completed please let us know so we can proceed to mark this thread as closed. I will try to reach you as a very last time on next Tuesday 25th.  After that we will mark the thread as closed

We will proceed to mark this thread as closed. If you have further issues or questions just go ahead and submit a new topic.