After the wifi installation failed, I tried to install it again and it finished with no error, BUT, my Wifi Network Adapter now doesn't work. Looking at de device manager and checking its properties, it shows:

"Windows is still setting up the class configuration for this device. (Code 56)"

The two virtual adapter from VMWare are also reporting the same problem.

I tried to "Reset Network" in Windows 10, and after that, all the devices (including the realtek network controller) stopped to work and started to report Code 56. So I did a system restore to at last get the realtek controller working again. Unfortunately, I don't have a restore point before the failed attempt of installing the driver update, so I cannot restore the system to the previously "working" environment.

I don't know what to do anymore. Everything was fine before installing those updates.

Any ideas? Reinstalling Windows would be a massive work since I have lots of software that would need to be reinstalled.

2. Can you provide a screenshot of the Device Manager showing the error message?

3. Are you running any Virtual Machine (VM) in your system?

Unfortunately I had no other option than restoring a system backup from one month ago, so I guess sending the SSU report now will not help. After restoring the backup, I didn't updated the wifi driver anymore since I want to avoid all that problem again.

I had VMWare installed in the host OS, but I completely removed it and it didn't help.

I do have a screenshot showing the error: 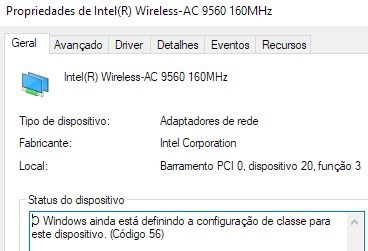 Just to confirm, you did the system restore and that fixed the issue, correct?

Anyways, the Intel® SSU report can still be useful for us to check more details about this issue, can you please provide it?

If not, please let me know if you need further assistance or if you have any additional questions.

I had a system image generated by EaseUS Todo Backup from one month ago, and I restored that image. I could not use the Windows's System Restore feature because there was no restore point dated before the faulty installation was done.

PS: Since I restored the image, the SSU utility keep me asking to update the Wifi driver, but I will not updated it due to that problem.

We wanted to check the Intel® SSU report, which gives system information; what you provided is the Intel® Driver & Support Assistant (Intel® DSA) summary.

I understand that you do not want to update the driver any more. If you prefer, you can keep this driver and just ignore the Intel® DSA updates.

Just so you know, there are several bugs reported with the latest Windows builds 2004 and newer, so you may want to check with Microsoft* for more recommendations for this Code 56 problem.

If you want you can also keep checking our download center for the latest updates coming for wireless and test https://downloadcenter.intel.com/product/59485/Wireless

As you do not want to install the new driver, I am just wondering if you have any additional questions or if we can close this inquiry.

Sorry for the mistake about the report.

You can close this thread.

We will proceed to close this inquiry, if you get to have any additional questions; please submit a new post and we will gladly assist you.