In my system, I use MATLAB HDL coder to generate an IP core facilitating host to target communication with an AXI bus, and a set of external data signals each mapped to their own distinct individual connection points i.e. "conduits". 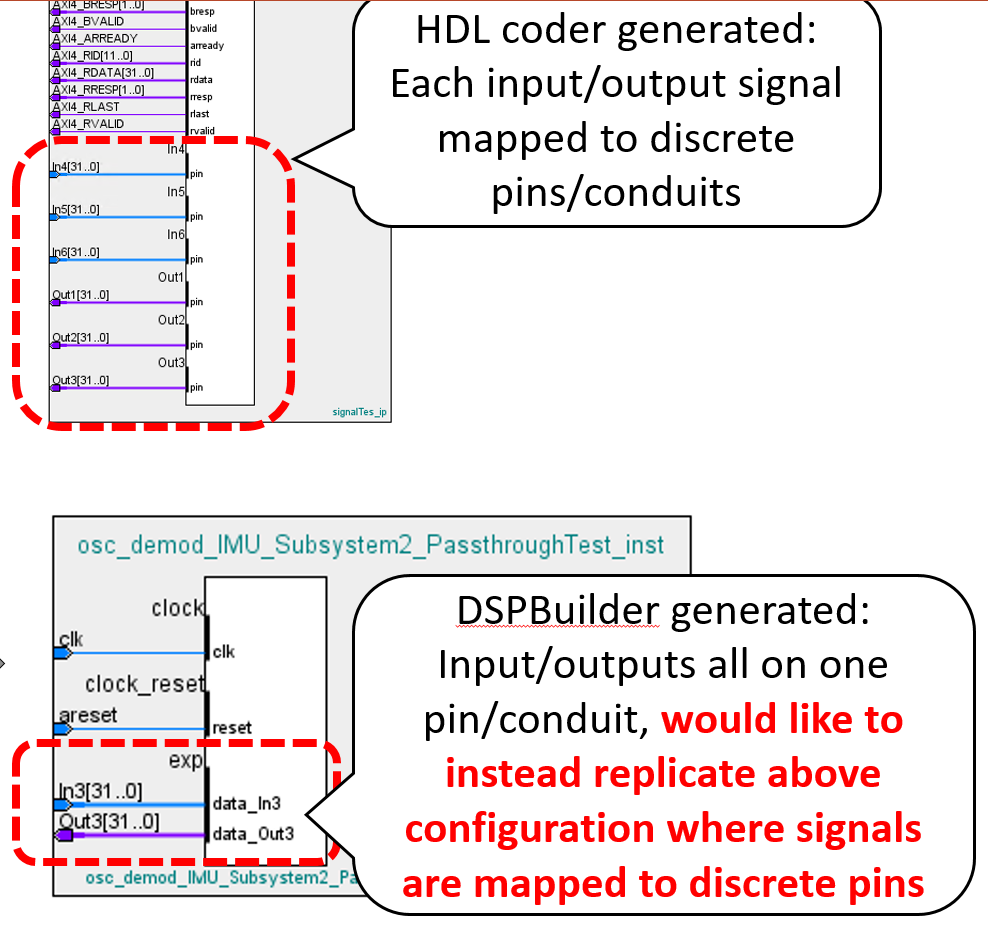 How would I go about editing the DSP Builder generated custom component to ensure that each of its external data signals are mapped to distinct individual conduits in Qsys, instead of being all lumped into a single conduit "exp"? Is there an option to configure this data-singal-to-conduit mapping in the MATLAB Simulink DSPBA Blockset, or would I have to manually edit the generated _hw.tcl file used to import the custom component into Qsys?

I found a workaround for my problem on my own, thanks to your tips.

Thank you to @sstrell for pointing out the easy/repeatable/bug-free way to edit conduit/data signal assignments from the Qsys component editor.

I borrowed this method to generate the _hw.tcl code necessary to define my custom port configuration.

Unfortunately in doing so, the rest of the _hw.tcl file was "wiped clean", but it is easy to regenerate in MATLAB.

I took the port configuration code generated from the component editor, and added it to my re-generated _hw.tcl file, and after refreshing Qsys, the ports on my DSPBA custom component are configured correctly.

Although slightly roundabout, this consistent UI-based procedure seems to work every time. Also, the port configuration _hw.tcl code generated from the component editor is re-usable as long as the DSPBA in/out data signals remain unchanged.

I'm not familiar with DSP Builder much, but as far as editing an existing custom component, just right-click the custom component in the IP Catalog and select Edit to open the Component Editor.  Then go to the Signals & Interfaces tab.  There you can add conduit interfaces and drag and drop the signals around to move them and organize them however you want.  Since these are conduit signals and not part of any standard interfaces, you can organize them however you wish.  Click Finish to create an updated _hw.tcl file for the component.

I don't know if that helps.

Thank you for the quick reply, this seems like promising advice.

If so, how can I disable this write protection, or import these DSP Builder custom components in a way that allows me to edit them after importing?

Hmm.  Maybe you can manually edit the _hw.tcl file which I assume is generated by DSP Builder (which again I could be wrong about).  It's trickier to reorganize signals this way, but if you can edit the _hw.tcl file in a text editor, you should be able to figure it out using the Platform Designer user guide, which describes the commands in _hw.tcl files.

Here is a screenshot of what occurs when I try to edit these DSP Builder generated custom components: it seems like the "Edit" button is grayed out. 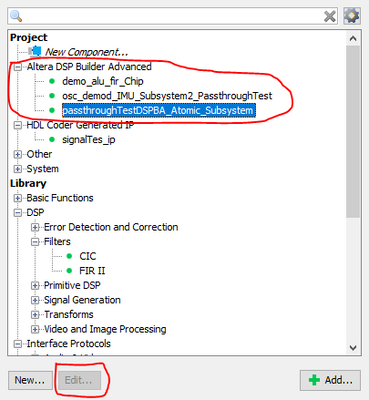 Thank you for the tip on editing the _hw.tcl file, I will give that a shot.

By default, all Intel FPGA IP is locked where Intel not want user to modify the hw.tcl files.

The reason is those exp buses are design as a conduit. simply modify the hw.tcl to other type of signal will not work.

There are two ways you can work on this.

1) to make it to AVST, or any other interface. You will need to recreate a custom component to wrap around it. and the interface you need to redesign as well as the it's original are just conduit.

it's easy to implement... Just put your data on the data bits, assert 'valid' when the data from the A/D is there, and wait until 'ready' is asserted. When it is, de-assert 'valid' and prepare the next data word.

You can refer to the spec for it here: https://www.intel.com/content/dam/www/programmable/us/en/pdfs/literature/manual/mnl_avalon_spec.pdf page 40

Also, you need to Add Component Instances in your hw.tcl files in order to call out the demo_nco_subsystem IP.

you can refer to https://www.intel.cn/content/www/cn/zh/programmable/documentation/zcn1513987282935.html?

Look for session 2.9. Add Component Instances to a Static or Generated Component

You can look for the demo_nco_subsystem hw.tcl files, by right click in it in the IP catalog -> details -> location

2) second way would be much simpler, just design create custom component for convertor from BUS to avalon ST. You are going to do it same way in number 1 anyway.

You can refer to https://www.youtube.com/watch?v=v6rhbVABlo8

For visibility of the signal, you can just click on Tools -> hierachy.

Thank you for the suggestions.

1. My goal is to output my DSP Builder data signals on "vanilla" conduits that do not conform to Avalon ST format (i.e. do not have valid/channel signals), to simplify high-level development for my team.

I believe mapping data signals to "vanilla" conduits is possible because we used MATLAB HDL coder to generate and import a custom component in Platform Designer with its data signals mapped to non-AvalonST conduits, and we verified that they work with a passthrough/self-connect test, as shown in the first screenshot below. These "vanilla" non-AvalonST conduits are shown in detail in the second screenshot below. 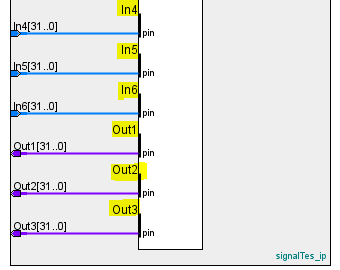 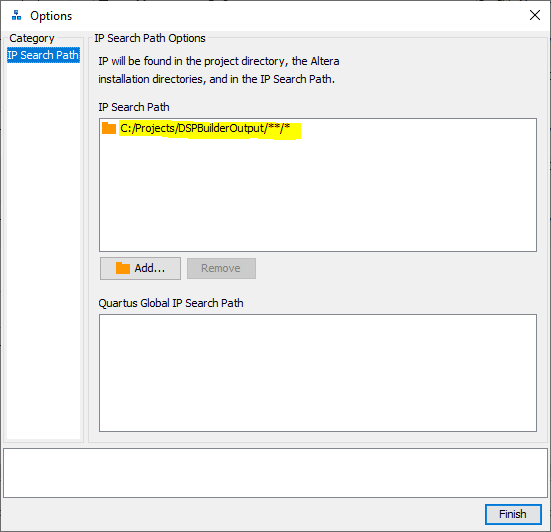 I tried editing this DSPBuilder-generated custom component, and was able to edit the conduit signals by dragging and dropping them into new conduit interface connection points, as Intel Forum user @sstrell  suggested earlier in this thread, shown in the below screenshots. 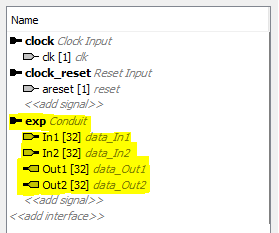 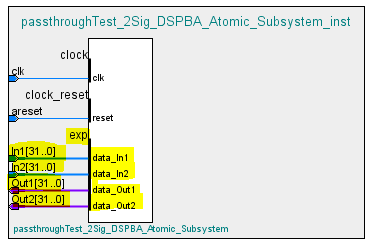 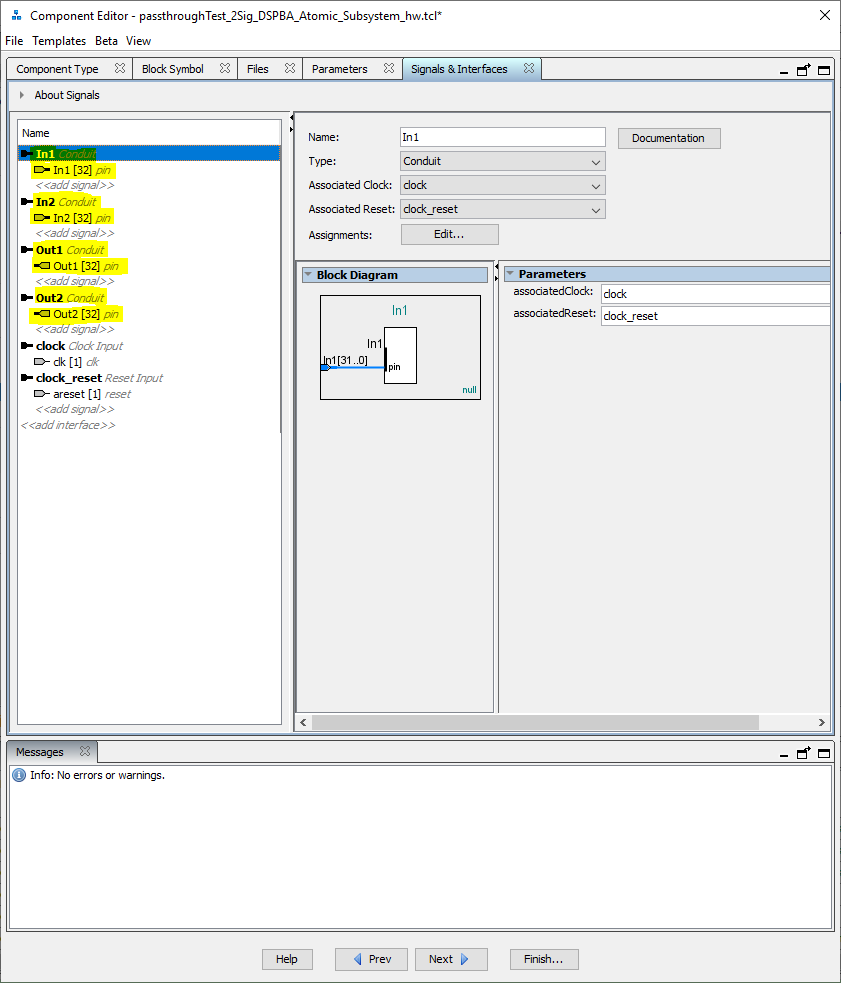 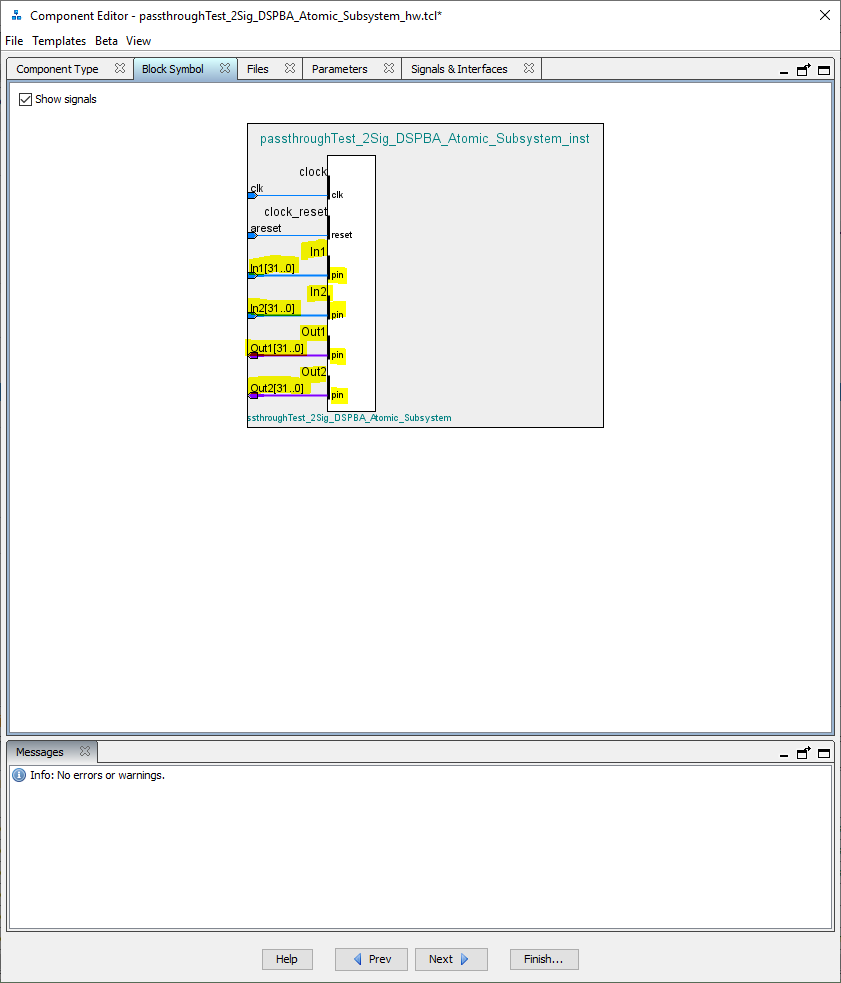 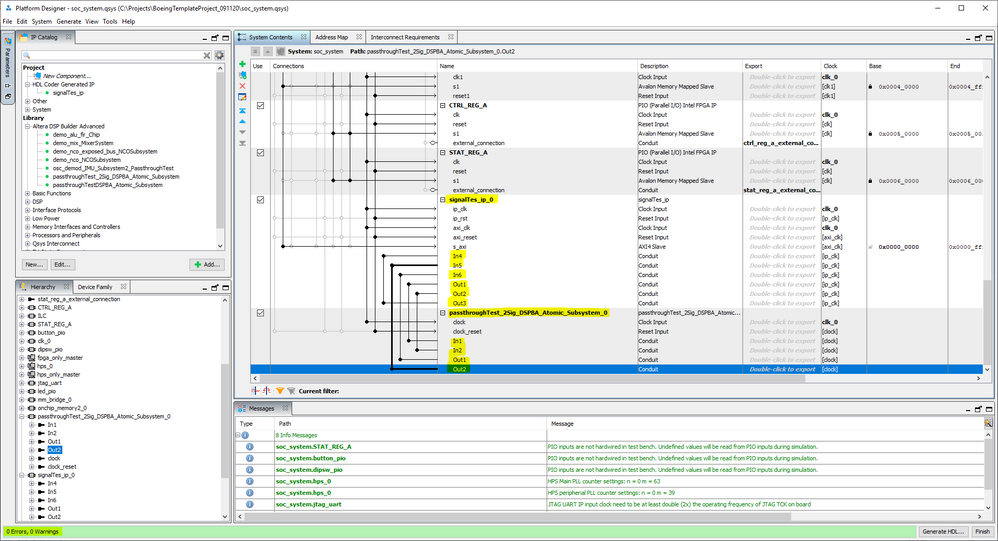 However this project fails to compile, because it seems like the .vhd synthesis files for the DSPBuilder-generated custom component are not being imported correctly.

Just after importing the DSPBuilder-generated custom component by including its output files folder containing _hw.tcl and .vhd files, and before making any port edits, there are no synthesis files displayed in the component editor, shown below, even though they are referenced in the _hw.tcl file, also shown below. 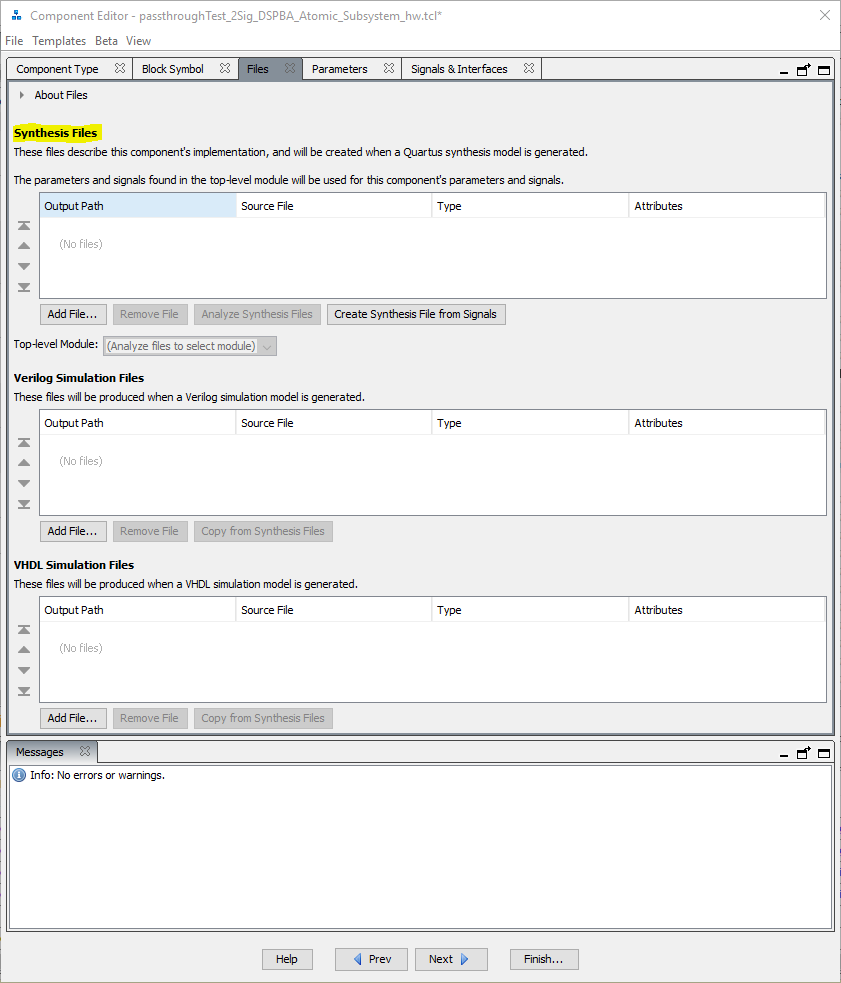 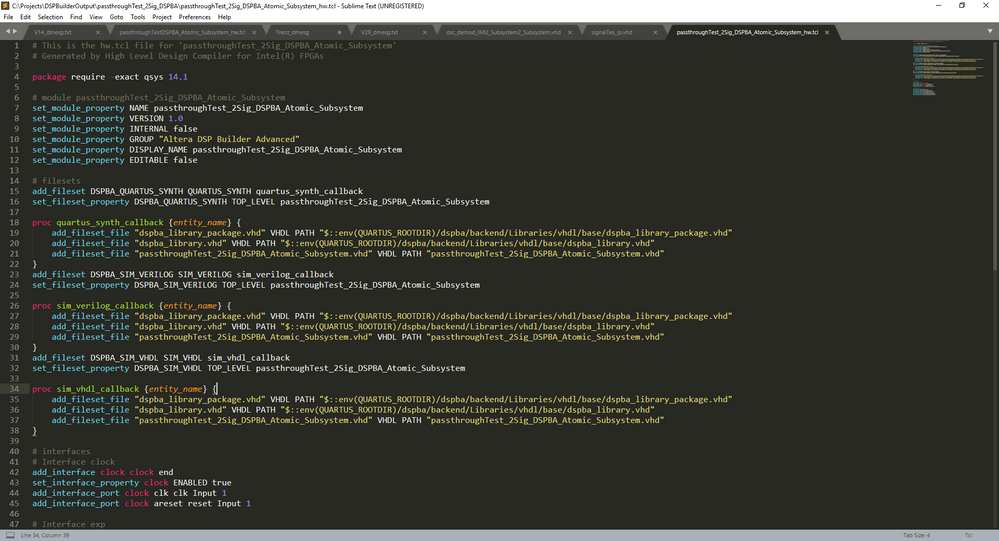 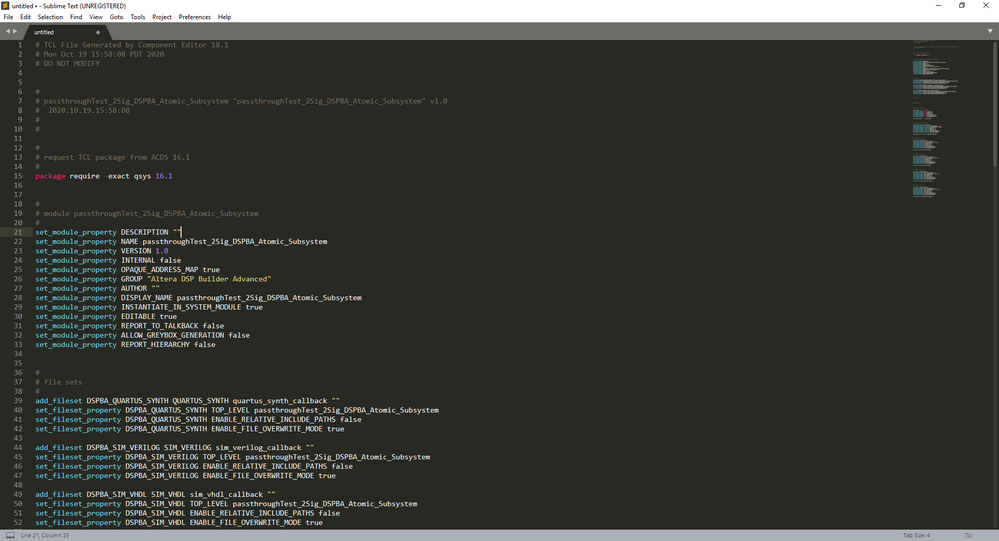 How can I ensure that the .vhd synthesis files originally referenced in the DSPBuilder-generated _hw.tcl file are still automatically referenced after importing into Platform Designer?

Do you see anything wrong with the way that I am importing this DSPBuilder-generated _hw.tcl file as a custom component in Platform Designer?

If these files will not get added automatically, how can I manually add them?

It seems like I would also have to add .vhd file references for "dspba_library_package.vhd" and "dspba_library.vhd", is this true?

I would prefer to find a solution where things are done "automatically" as much as possible, to simplify things and ensure seamless high level development for the rest of my team, to whom I will hand-off this workflow.

Can you check your email on this? We can have a meeting to discuss more.

I found a workaround for my problem on my own, thanks to your tips.

Thank you to @sstrell for pointing out the easy/repeatable/bug-free way to edit conduit/data signal assignments from the Qsys component editor.

I borrowed this method to generate the _hw.tcl code necessary to define my custom port configuration.

Unfortunately in doing so, the rest of the _hw.tcl file was "wiped clean", but it is easy to regenerate in MATLAB.

I took the port configuration code generated from the component editor, and added it to my re-generated _hw.tcl file, and after refreshing Qsys, the ports on my DSPBA custom component are configured correctly.

Although slightly roundabout, this consistent UI-based procedure seems to work every time. Also, the port configuration _hw.tcl code generated from the component editor is re-usable as long as the DSPBA in/out data signals remain unchanged. 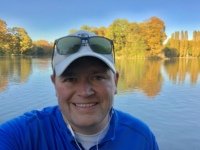 Hello, Ghe0rghe.  I just wanted to advise that there might be a solution to your problem that might be more simple.  Please see the KDB link below - involves checking the "use single conduit" button that is in the Control box in DSP Builder.

I am not 100% sure that this will solve your specific case, but worth looking at in case it saves you all of the modification steps.

Glad to hear that you found the workaround. Please post a response in the next 15 days if you have further queries. After 15 days, this thread will be transitioned to community support. The community users will be able to help you with your follow-up questions.