How to set a Triple-Speed Ethernet (TSE) IP to operate in SGMII at 100 Mbps in a Cyclone V GT?

We are using a TSE IP on a Cyclone V GT, configured as follows:

This FPGA is on a proprietary PCB along with a KSZ9897S Microchip Ethernet switch. It is connected to port 7 of this switch (which is exclusively an SGMII interface).

TSE IP works as expected at 1Gbps. However, it is desirable for us to lock the operation at 100 Mbps. Based on what we interpreted from the user guide, we have been trying to configure the IP, however we've had no sucess changing the interface speed from 1Gbps to 100Mbps, no matter what we do.

Even disabling auto-negotiation and setting the interface speed to 100Mbps (via the “IF_Mode Register” register, PCS offset 0x14) the speed does not seem to change in the status registers (via “PCS Control Register”, offset 0x00). Such behavior can be confirmed because the interface continues operating correctly at 1 Gbps.

We've already tried different approaches. We have even tried to force the "set_1000" internal signal to '0' in the RTL at the top of the IP to see if it would operate at 100Mbps, but without success. Although the synthesis was performed without errors, Ethernet traffic does not pass in this scenario.

Could anybody confirm if it is possible to force IP operation in SGMII at 100 Mbps? If so, what is the correct procedure to achieve it?

Thank you in advance.
Regards,
Diego. 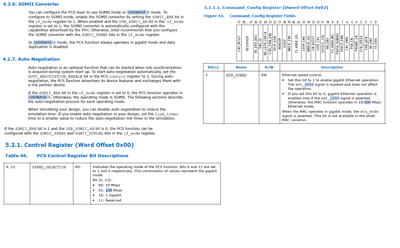 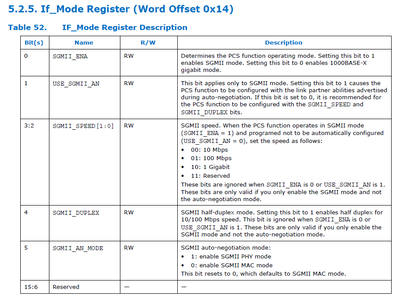 You more or less are doing the right thing here and looking at the correct register.

Anyway, let's look at your issue together.

Thank you for your quick reply.

We don't have a PHY between the switch and the FPGA on our card. I would like to point out that we have no reason to suspect that there is an error in the configuration of the switch so far, since when configuring the interface speed, its status registers reflect this promptly and, as expected, traffic on the interface stops immediately.

Our suspicion falls on the TSE-Mac since even setting the rate of 100 Mbps in the registers, we did not observe any change in the behavior of the interface (both in the registers and in the bus itself).

As you can see in the attached file, the IP configuration is as suggested:

Please let us know if we could provide any further information.

Couple suggestion for you to try out :

I have not hear back from you for quite sometime.

Hopefully my earlier debug suggestion is useful to you or perhaps you have made progress in your issue debug.

Anyway, I am setting this case to closure. Feel free to file new post if you still need further assistance on issue debug.

I'm sorry I didn't respond sooner. We are still working on the issue based on the suggestions you gave.

Thanks again for your help and support.
Regards,