Driver support assistant continually tells me that there is a driver update when mine is newer!

I was persuaded by folks wiser than me, to install the Driver Support Assistant, and all has been well since.

However these last few weeks it constantly tells me there is a Graphics driver update to install, and upon attempting to install it, the machine tells me it is older than the one already installed!

Why does this keep happening?

How can I stop it?

To have a better understanding of your issue, please provide me with the following:

six-h
New Contributor I
1,203 Views
In response to Jean_Intel
@Jean_Intel No hardware changes and only the usual MS Updates over the past few months.
The DSA has for some reason disappeared from the system tray "Hidden Icons" but is visible in "Progs and Features", it shows as ver: 22.2.14.5 and oddly says it was installed on 30/3/22.
I know it's been on my system for years not months!
because the only thing I can do under Progs and Features, is un-install it, I cant interrogate it for the driver it wanted to install.
I terminated the install on both occasions that my PC told me the driver it wanted to install was older that that which was currently in use, so no, the installation process was not completed and no error messages from DSA, just the notification from my system flagging that the driver was older than that currently installed.
In response to Jean_Intel
0 Kudos
Copy link
Share
Reply

This is a recurrent problem with this tool...

Don't lose your mind, if you know you already have a newer driver, just disregard the notification and move on...

You can also change the scan frequency on this tool if it is getting too annoying or you can even hide the said notification...

@Jean_Intel Hi again,  the tool has shown up again today, Windows sent me a Notification, this time I have copied the web page.

I'm pretty certain that this is the same Graphics driver it has now 3 times attempted to install, and to which the system ibjects on the grounds that it's older than existing! 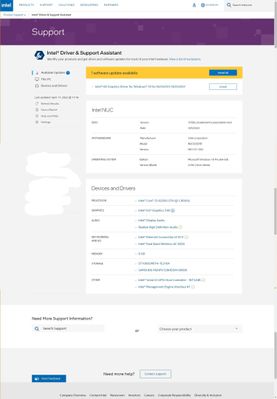 Sorry, I don't know how to make it large enough for you to read easily!

Thanks for your response. I appreciate the information provided.

This time, as the Intel® DSA tool is not working correctly, I would like to suggest reinstalling the application following these steps:

Hi @Jean_Intel Followed your instructions and the new version of the tool wants to install exactly the same driver! 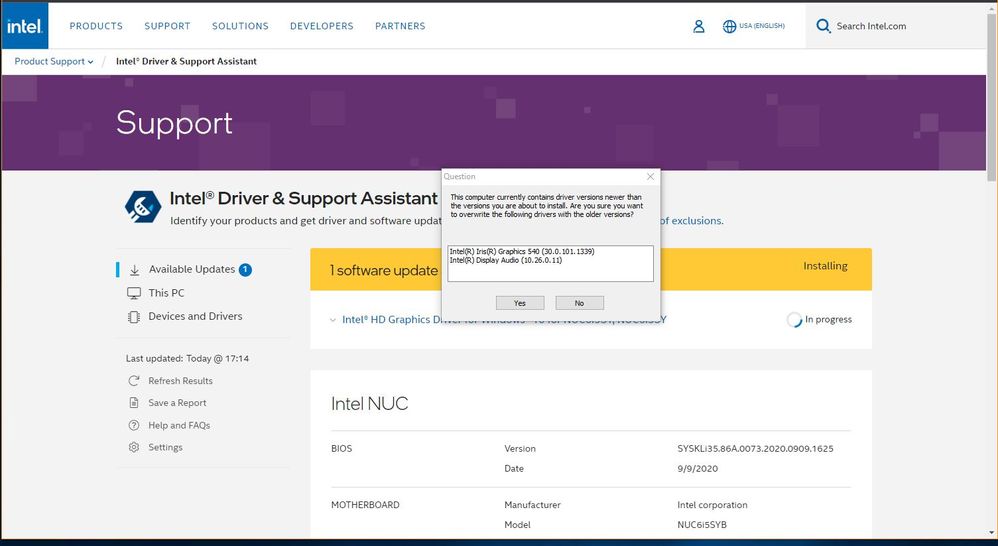 I am sorry that the issue persists after reinstalling the Intel® DSA.

I want to request some information to have more insight into your issue, so please provide me with the following:

I've attached the scan but the zipped downloads folder is too large.

I did click on "Submit" in the Support utility, but it took me to a "This site can't be reached" page!

How do you want me to upload the Zipped folder?

Thanks your email Jean,

Just an update, the newly installed DSA has generated two update notifications (Duplicates I think) for what I suspect is the same driver which my system has already rejected:-

Thanks for the information. I will take it into consideration for my investigation.

I noticed that on your latest post, it mentioned that the driver suggested is x.x.x.6519. However, as per previous information, the driver recommended by the Intel® DSA was 30.0.101.1339.

Could you confirm which driver version the Intel® DSA is asking you to update?

That is correct, the information was copied and pasted from the web page that the DSA opened, ...twice!

It, (the DSA) has just this minute popped up another notification screenshot attached with insert of Device manager and current Driver details :- 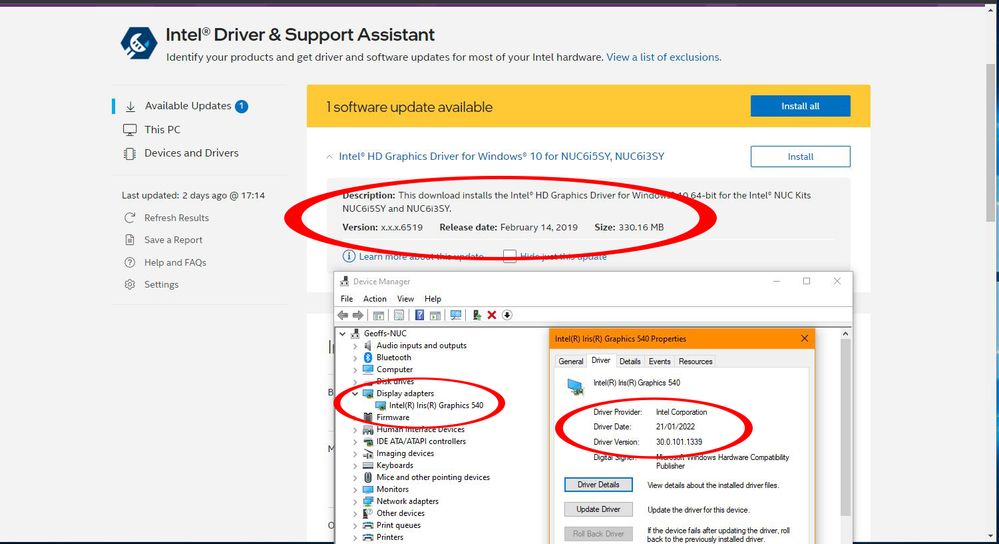 I appreciate the information provided.

I will continue with my research about your issue. I will reach you once I have a response.

Another update advised half an hour ago, exactly the same driver!

Joan, are you making any progress with this dratted piece of software?

Should I perhaps just delete it and save myself the constant annoyance of these notifications to install out of date drivers?

Thanks for waiting for a response.

I noticed that the driver 25.20.100.6519, the driver suggested by the Intel® DSA, is the latest recommended for your Intel Nuc. The Intel® DSA is offering the correct driver you should update.