Continuing from another thread that is marked 'not monitored': Washed out or faded Colours Intel(R) Iris(R) Xe Graphics - Intel Communities

When 'Display Power Saving' mode is turned on, it makes the colours look washed-out/faded. I have to turn it off to get the colours back. I've kept it off since the beginning but the problem is that it gets enabled after every Windows update, command center shows it as disabled but it will still make the colours washed-out. 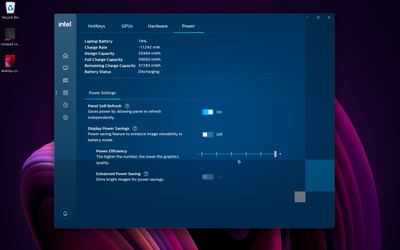 I've already checked with different versions of drivers and Command Center but all of them have the same issue. Even if it's turned off, after Windows update, the next time laptop is unplugged, it will trigger the 'Display Power Saving' mode.

I also checked if it's Command Center that's causing the issue, but found out that even if Command Center is uninstalled, washed-out colours could still be visible (I unplugged the laptop after a Windows update), as I had to install the Command Center only to get back the colours. 'Display Power Saving' was turned off at the time of uninstalling the Command Center. So it's most likely an issue within the driver.

At the time of writing this, I faced it again and haven't had Command Center installed. I installed it to toggle 'Display Power Saving' on and off and now the display has normal colours.

So the summary is 'Display Power Saving' feature (or at least its effect) is enabled even if it's disabled in the settings.

Versions I've checked which has this issue:

29 (oldest driver I could find)

What could trigger washed-out colours (even when 'Display Power Saving' is turned off):

- The first time you unplug the device after a Windows Update.

This can be repeated, and every time colours will become faded. Also happens after Windows Update without even opening Control Center.

Note: The whole display gets faded and not just any specific app or Desktop.

Thanks for posting to the  Intel️® communities. I am sorry to hear that you are experiencing issues with your system.

I want to highlight that I don't have any issue with the 'Display Power Savings' mode making the display look washed-out/faded, instead, Even when it's disabled in the Command Center settings and Command Center is uninstalled, how does it get enabled automatically? And disabling it again still doesn't make any difference and brings faded colours after Opening Command Center or a Windows update.

We appreciate your patience.

Based on the report you shared, I noticed you are running Windows 11 build version 22623, this seems to be an Operating System's insider version, have you tested with the latest 22621 non-insider version? Let me know if you experience any issues with the official OS version 22H2 (22621).

Thanks for asking. I believe, I was already facing this issue before switching to insider builds. Going back to stable release could take sometime from my end, but I'll definitely check and let you know.

For the time being, I suggest you to also refer to the previous question thread where he was on .22000 (21H2) and facing the exact same problem: https://community.intel.com/t5/Graphics/Washed-out-or-faded-Colours-Intel-R-Iris-R-Xe-Graphics/m-p/1...

Also, please let me know if you can repro the problem internally with the given steps I mentioned above.

Thanks for your response.

We understand that it may take a while for you to install the official OS version; however, this would help us discard the possibility that this issue is related to the Operating System. As you mentioned, the community member from the other thread had the official release, but it was the 22000 (21H2) and not the 22621 (22H2) latest Official version where the issue may have been addressed.

Once we discard this possibility, we can try to reproduce the issue as we would have a nearer environment that will contribute to our replication steps.

I also had this issue when I got my new device.  At first, I thought I had a inferior display.  It took me 2 days to understand it was the power saving feature of Intel graphics that caused it.  I thought you should consider to turn it off by default on driver level.  In addition, the washed out effect is more obvious when you are in a low light environment, another option could be automatically turn the feature off when the screen brightness is below certain level.

@slide If you are on 22H2, could you share the Intel SSU report by following the step mentioned here: https://community.intel.com/t5/Graphics/Washed-out-or-faded-colours-on-Intel-Iris-Xe-Graphics/m-p/14...

If @slide is on 22H2, I guess we can safely assume (which I already believe) that this issue is not related to Windows insiders build.

I agree with @slide , Display Power Savings should be kept disabled in the driver unless user enables it from the Command Center. Having it enabled by default causes confusion to anyone who don't know why they are getting a washed out display. I don't think anyone would want a washed out display to have a longer battery life.

I hope you are doing fine.

Have you tried installing the Windows 22H2 version?

Please submit a new question on the Graphics community forums, and provide a detailed explanation of the situation to have a more personalized troubleshooting step for your issue. If you'd like, you can try my suggestions from this thread.

So I managed to install a fresh copy of Windows 11 22H2 fully updated. Also tried different versions of the drivers available for Intel Iris Xe graphics to figure out which drivers was the first known bad. Drivers were taken from Intel's official driver's page (latest ones) Intel® Arc™ & Iris® Xe Graphics - WHQL - Windows* , Intel® Graphics – Windows* DCH Drivers (older ones)  and two of them are OEM provided.

While installing different versions of the driver, I made sure to clean install each of the them. I tested the existence of the said issue by following the steps mentioned in the previous post. Intel Command Center was updated to the latest before testing the drivers and it also proofs the issue is not related to the IGCC instead it's the driver which causes the issue.

I've also attached the ssu report for each of the versions below.

Hope this could help in solving this issue. Let me know if anything's needed.

Let us look into this and we will get back to you at our earliest convenience.

We have followed the steps you shared. Unfortunately, we were unable to replicate the issue you mentioned; we never experienced any Wash-out/faded colors. These may indicate that the problem is not related to the Driver, so we recommend contacting your Original Equipment Manufacturer for further support.

To replicate the issue, you need use the display on your laptop, and unplug the AC adaptor.

Only when you are on battery, the display power saving feature will be on.  And make sure you set your power efficiency slide to the maximum,  which is the default setting and which will make the wash-out effect obvious.

To look for the wash-out effect,  my suggestion is you focus on pictures or videos which show human skins. To be specific,  if you have a photo/video showing face of a Caucasian on you screen, you don't need to be a color grading expert to see the skin color is wrong because of your so called  'display power saving feature'.  Yes, human eyes are more susceptive of skin color.