Intel® High Level Design
Support for Intel® High Level Synthesis Compiler, DSP Builder, OneAPI for Intel® FPGAs, Intel® FPGA SDK for OpenCL™
Announcements
Intel Support hours are Monday-Fridays, 8am-5pm PST, except Holidays. Thanks to our community members who provide support during our down time or before we get to your questions. We appreciate you!

In Section 6.1.4 of the Intel FPGA SDK for OpenCL Pro Edition: Best Practices Guide for version 20.4, the documentation covers "Relaxing Loop-Carried Dependency by Inferring Shift Registers", and uses an accumulation operation to motivate the issue.

I understand the dependency on the variable "temp_sum" that causes the initiation interval to not be 1, but instead, II=12 cycles.

I have version 19.1 of the tools and I'm trying to use the system viewer, block viewer, and cluster viewer to try to understand when these operations are scheduled, but I am still confused.

To solve this dependency, the read and the write operations need to be decoupled and go to different variables. This is exactly what the shift register does. If you look at line 22 in the optimized code, you will notice that the read and the write do not involve the same variable anymore. Read is now from shift_reg[0], while write is to shift_reg[12], hence the dependency is resolved. Though, in this example, the shift register size is 13; in my experience, 12 works as well.

I hope the above description makes the process less confusion instead of more.

I appreciate the fast reply. Apologies for my late response.

Your post is somewhat helpful, but I'm still confused as to what is actually happening at the hardware level. I've uploaded a picture of what I believe to be happening. 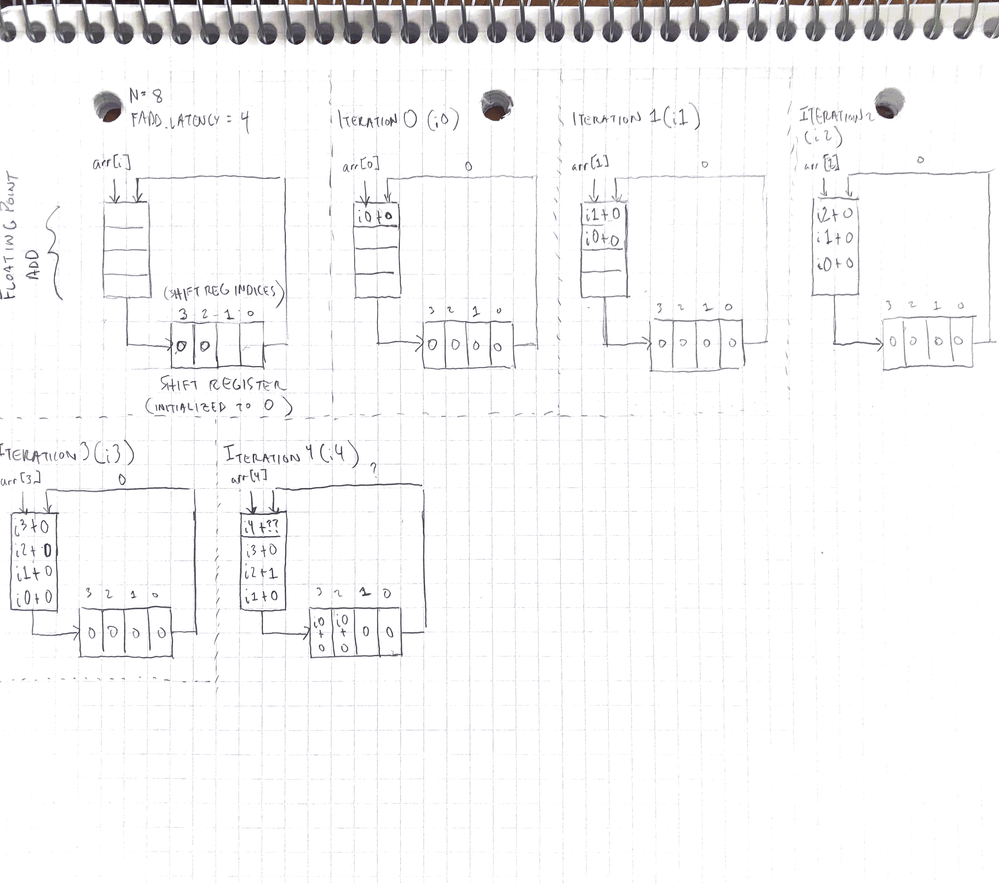 In the top left figure is my mental model of the hardware that is to be synthesized. (I am using a floating point add circuit that I'm assuming has a latency of 4 cycles instead of a double precision add with a latency of 11 cycles). The floating point add takes input from the array arr and from the shift register at position 0 (sr[0]). When the floating point add completes, it writes to the top of the shift register at position sr[3]. The total number of elements, N, to be accumulated is equal to 8, but I think I'm able to express my concern drawing up to iteration 4. Each panel shows what I believe the state of the accumulator circuit's pipeline (floating point add circuit and shift register) when an iteration is issued. When we get to iteration 4 (i4), based on what the C code as well as your well detailed response suggests, the shift register should be able to provide the result of i0 in order to add that to i4, but the value of i0 has not made it to position sr[0] yet. I think I'm missing something about what hardware is actually being synthesized, but I'm not sure what that thing is. Any further help would be appreciated.

Thank you for posting in Intel community forum, hope this message find you well and apologies for the delayed in response.
The explanation that are provided by HRZ are spot on as per my understanding too.
As for the details diagram, as for the iteration 1(i1) itself the shift register sr[3] should be already containing the result from i0, hence with the reach of i4 with the cycle mentioning to be 8, it will be a process is repeated at the register level.
Hope that clarify your doubts.

Hope this message find you well and good day, unfortunately as we do not receive any response from you to the previous clarification that we have provided. Please post a response in the next 15 days to allow me to continue to support you. After 15 days, this thread will be transitioned to community support. The community users will be able to help you with your follow-up questions.