I have tried to upgrade my Intel NUC Hades Canyon NUC8i7HVB from 1909 to 2004 several times, but it always does a rollback at around 70% completion at the second (final?) stage.

The upgrade error log shows at the end only an error during a metrics file merge?!

First attempt was mid of August with subsequent attempts in September.
Windows 10 (Professional) was offering the feature upgrade and found no upgrade issues.
The installation ist just about one year fresh.

I also created a upgrade media for Windows 10 2004 in September and used this upgrade method.

I spend multiple hours to find any hints and tried to follow every hint.

1.) BIOS and driver are at the latest version as of 11.10.2020 and each attempt was done with latest Intel/AMD driver

2.) All Antivirus apps are deinstalled

3.) Windows and disk-checks done without any errors or malware found.

A fresh install would be an extreme effort I'm trying to avoid, as I have a lot of development env. for microcontroller development configured + other smaller but high effort to get to the current state settings. Windows is certainly installed in 15mins, but then ... many days effort.

I hope somebody has a hint or Intel/Microsoft find the root course of the upgrade problem.
It seem that there is something wrong as the further offer for an upgrade is now no longer offered and it says it's in preparation. I'm wondering if anybody got the upgrade on this NUC8i7HVB from 1909 to 2004 done?

and the Seagate is just the currrent connect Seagate external USB 3.0 disk.

Yea, I was more curious than thinking there was a correlation.

I have worked with a four or five different HV units now (including one built from parts scavenged from other dead units) and have not had *any* issues updating them from 1909 to 2004.

Doing a fresh install means that I give up, don't learn anything how to address such problems and spend many days, weeks to get my system to a state where it is.
there must be a way to find the root cause for such kind of problems.

Then, you should contact Microsoft for help in debugging their OS setup.

two comments from my side

1.) how to contact Microsoft - (a proper contact for such a case), at least I auto.transmitted the problem with description the first time it fails?

2.) This would be a nightmare, the last time it took me week to get the system to the same state (you can't imagine much effort it would take to get my development machine to the same state). So I rather prefer to find out what is really the root cause (I guess it's a small thing) which rolles back the installation at the very end. This is not an exotic HW (my opinion at least).

Some ideas for you:

1. In order to protect your installation, you should keep full backup image of your drive. Hope that you have one.

2. Please describe or attach an image showing the Activation Status of your Windows. You will find it in Windows Settings Update & Security > Activation.

3. Can you try to upgrade your Windows after uninstalling the VMware Virtual Machine Software?

4. To verify that is nothing wrong with your hardware,  try clean Windows installation. Later you may restore your drive from the backup.

here my feedback to your suggestions:

1.) yes, I always do a fresh full disk image backup before a system update 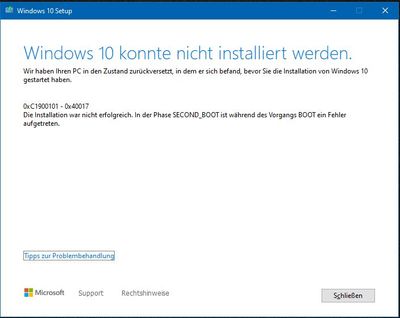 4.) I'll order another Samsung NVME 970 Evo Plus in about 5weeks and will do a fresh install (just for testing initially as it would take very long to restore all SW and settings). However, I'm pretty shure that that will work.

BTW: Do a fresh install would mean:
- we don't understand the problem, we don't have an answer, we don't know how to analyse and find such problems and we give up and don't learn anything

wrong screenshot, here is the activation: 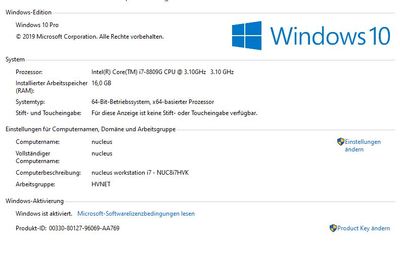 "BTW: Do a fresh install would mean:
- we don't understand the problem, we don't have an answer, we don't know how to analyse and find such problems and we give up and don't learn anything"

Perhaps.  But this is a technical support forum for Intel products.  You have an OS problem as far as can be determined.  It may be hardware related, but we have gone as far as we can.  To determine what the problem is, Microsoft can help you analyse the updating of their OS.  You are stuck on demanding that we, on the Intel forum, do this for you.  Perhaps you are insisting on this because we are responding to you, and you suspect Microsoft will not.  Nonetheless, Microsoft provides Windows support, not Intel.

You can learn from this.  What you will learn is that there is some obscure reason for the OS install to fail repeatedly as it does, and a fresh install will take you 30 minutes (or less).  Demanding that you "learn" why the install is failing is not important at this point.  Getting to 2004, or even 20H2, is your goal, and you can try this step with a fresh install.  If you backup what you have, and a 2004/20H2 fresh install succeeds, then you will have learned that it is not the hardware that is the problem, and that it is your existing install and Microsoft's upgrade process.  You then restore your backup, and contact Microsoft support and have them educate you on their OS upgrade problems.

You want to learn?  You learn by eliminating possible problems.  If a 2004/20H2 fresh install succeeds, you will have learned something.  And, you just might be happy that you have succeeded in being current, and decide to no longer waste your time chasing an answer that Microsoft cannot help with anyway.

Also, I have access to 3  NUC8i7HVK.  I know you have NUC8i7HVB, but my 3 NUC8i7HVK all updated successfully, as they always do.

And, "I have a lot of development env. for microcontroller development configured + other smaller but high effort to get to the current state settings."   To me, this says you have some custom settings or had some custom equipment installed that is confusing WINDOWS.  You may have created your own problem and you want someone else to fix it for you.

"I hope somebody has a hint or Intel/Microsoft find the root course of the upgrade problem."   But, you are not trying to get help from Microsoft.

thanks for your support so far. I'll not bother you anymore.

BTW: I have contacted MS support via the support forum and using the troubleshooting/feedfack form, but did not get any response so far.

I don't want to bother you any more either. But I was expecting other image showing the Activation Status: 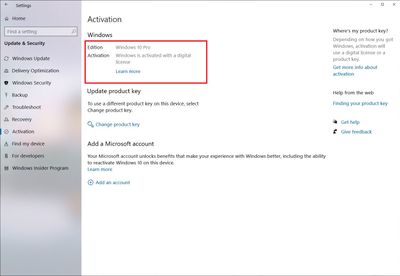 ok, here is the other activation screen, it tells less but says also that Windows 10 pro is activated.

Of course in German as I'm in Austria.

BTW: The Windows re-installation itself is not the problem/effort (as explained before) but the effort comes afterwards (I guess it would take me a month to get all back installed/set-up. I have at lest 40+ development tools + Video/Audio processing, Office etc. ect. 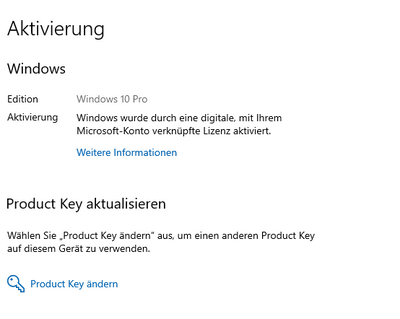 I didn't suggest you to reinstall your applications. I suggested the clean Windows installation to ensure that there is no hardware problem. Only you can debug your NUC. But first you need to be sure that there is no hardware problem. Once you did this, restore back you drive and start debugging. For example you may try to upgrade Windows to version 20H2 after performing Clean Boot and see how it goes.

The Windows installation takes 10-15mins but then I spend another 8 hours for the other core SW and it would take me another week(s) to get it back to the same state So I switched back to the old SSD.

I did an upgrade of an Intel NUC i7 (Skull Canyon) with nearly the same SW on it and it worked also, but the upgrade of the Hades Canyon does not work.

I hope somebody has another hint for the upgrade/rollback problem or Microsoft detect and fix such errors.

Disable your USB thunderbolt in the BIOS and then try the update,. I have actual give up on the Hades Canyon and did a full new build not long ago got jack of the lack of Intel support Guys in the forums are quite helpful as for Intel well any one who dumps GPU support for a Flag ship item after 12 months is just a not worth if company.

I now have the Following

@Alan_J_T Thanks for the Thunderbold hint. Any evidence that this would impach tthe upgrade? As posted, the fresh install works fine!

I do agree an the CPU/GPU support! Buying the expensive gflag-ship and after 12month, there is no more driver upgrades for the new Windows 10 2004+ driver model is a shame.

Intel can't blame it alone on AMD as the CPU/GPU is an Intel silicon, so they have to clarify it with AMD asap. Now 6-8 month later knwoing that and after promising to get back the support, there is no update and no solution. So I lost trust and will also consider to build a new HW package and use rather a Nvidia GPU.