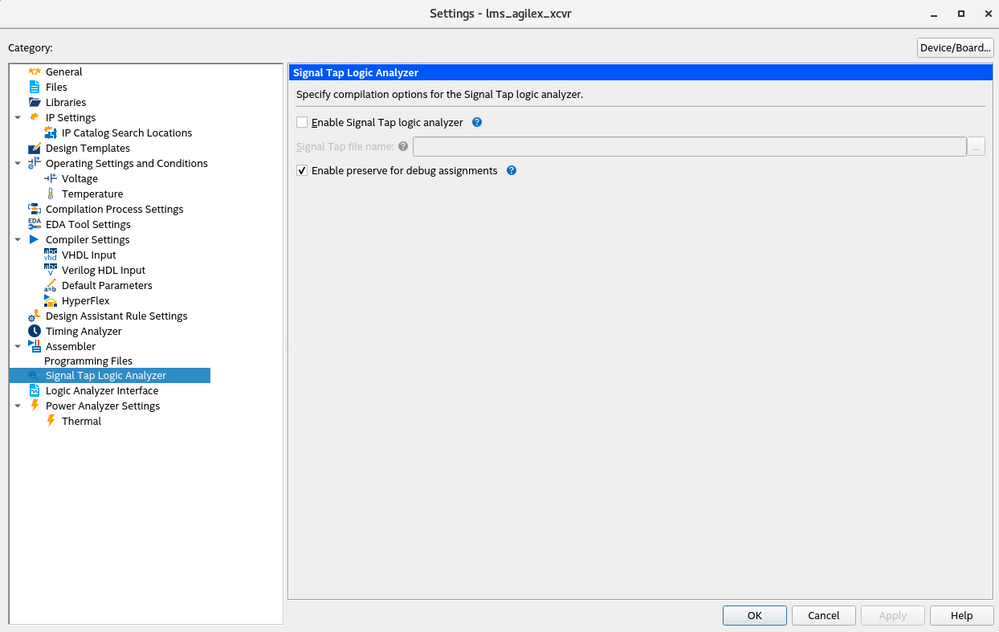 What do I do wrong?

Alright thanks for the feedback. I've let them know that you expect this fix to apply to all data types.

In the meantime your only workaround is to have the signal connected to an i/o port.

With that, I now transition this thread to community support. If you have a new question, feel free to open a new thread to get the support from Intel experts. Otherwise, the community users will continue to help you on this thread. Thank you.

May I know if you receive this warning:

If yes then please follow the guidelines in this KDB: https://www.intel.com/content/www/us/en/support/programmable/articles/000090673.html

It would also be helpful to see the code for TESTPRESERVE.  What is it connected to?

1. TESTPRESERVE has no load, I want to keep it for future use without having to change the stp file. If that's not possible, then it's okay if it isn't present.

2. For the other case, it looks like either preserve_for_debug or Quartus is unable to keep my signals, it's unusable.

I see the equivalent net and its driver in the post-synthesis netlist (inside an instance, connected to one of its ports), somehow Quartus doesn't keep the net with the name I specified in my code. (Xilinx's Vivado adds LUT in between to keep both equivalent nets, how about Quartus?)

I tried noprune, keep, preserve, but in reality I don't really care about register or wire, the goal is to add an attribute to a structure with (SV's) logic members.

If it's not going to get connected to anything, that's not what preserve for debug is for.  Instead, add a virtual pin assignment to the node.  Preserve for debug is to preserve internal nodes through the compilation and optimization process, maintaining their names so they can be easily added to post-fit debugging tools like Signal Tap.  Virtual pins are logic stubs created to prevent I/O from getting optimized away.

Thank you for the precision, I understand for a no-driver net, nevertheless for a no-fanout net, in the ug 683236:

If it isn't the case, this is something Intel should add in Quartus, adding virtual pins must be done automatically by Quartus or the preserve_for_debug attribute is meaningless. Moving from Xilinx to Quartus, this debug workflow seems inefficient.

Again, preserve for debug is not for I/O.  It's for internal nodes.

You can use noprune or virtual pins.  I like virtual pins because I don't need to make any changes to the HDL code, just create an assignment, just like using preserve for debug as an assignment instead of an attribute.

Sorry for the misunderstanding, what do you call I/O? Actual I/O of the fpga (ports of the top connected to pins) or any instance ports?

Here is the code showing the signal I'd like to debug and that isn't kept by Quartus:

You don't show your top-level ports, but you can't connect an I/O (top-level port) directly to Signal Tap anyway because there is no routing from the I/O element back into the device to connect to Signal Tap.  You have to tap the signal that feeds into the I/O, which you can find in tools like the Node Finder in Signal Tap or the Technology Map Viewer.

As for sigtodebug specifically, if you have a virtual pin, you don't need preserve_for_debug.  The signal would be preserved and you could tap it directly.

I never talked about a pin nor an I/O pin.

Sorry, if I understand well, your solution is to not use the feature supposed to be made for that exact purpose?

I can flag any signals I want using Xilinx Vivado's mark_debug and it will automatically detect all the flagged signals, net, register, with or w/o fanout and allows me to add them without other manual intervention, it also detects which clock the signal is driven by.

I hoped preserve_for_debug had a similar behavior without having to manually create virtual pins on specific signals. I also don't want to care whether the signal has fanout or not. Moreover, the goal is to flag a structure whose some members are connected and some left unconnected.

You asked "what do you call I/O?", and I call a top-level device package pin an I/O.

Again, the feature is not for I/O or unconnected signals.  It's for buried signals that may get optimized away or have their name changed through the course of compilation and optimization.  With the preserve for debug feature, there is no need to even create an unconnected signal like what you are doing since you can preserve whatever that stub is connected to and then tap it in Signal Tap.  You don't have to alter your design just to accommodate debugging.  And when you're done with Signal Tap, you simply disable it and recompile to remove the Signal Tap logic implementation.

So in your example, tap whatever is driving out_a in the instantiated entity.  You can use preserve for debug on it if you want and that will guarantee it's preserved and make it easy to find by being in its own filter in the Node Finder when adding signals to Signal Tap.

a fanout free register is exactly an unconnected signal.

Could you explain your workflow to add signals in signaltap without the need to modify the code with any verilog attributes? With eventually a simple example.

I'm new to Intel and compared to Xilinx's mark_debug and ILA, it seems very time consuming then I'd be glad to know your method.

The assignments to use are documented here:

and discussed in this training:

After they're marked, you enable the feature, as you have done, do a full recompile, and then add the preserved nodes in Signal Tap using the dedicated Node Finder filter.  These things are all discussed in the doc and training I linked to.

Thank you but this is exactly the document I used (cf. the above screenshot).

Your statements differ from what is in the documentation.

I don't do anything wrong, I even do what is recommended.

Once more, the pragma preserve_for_debug is broken, it doesn't preserve the signals.

Yes, and then it says "by specifying assignments in the Assignment Editor or project .qsf file directly."  There are multiple methods for using this.

I'm not saying you did anything wrong but again, what you are trying to preserve with this is not what this feature is for.  Use virtual pin assignments and you will be good to go.

preserve_for_debug is for internal signals, not outputs.


Yes, and then it says "by specifying assignments in the Assignment Editor or project .qsf file directly."  There are multiple methods for using this.

I'm not saying you did anything wrong but again, what you are trying to preserve with this is not what this feature is for.

I quoted the documentation showing it is meant for my situation.

Use virtual pin assignments and you will be good to go.

I feel like this "technique" is just a work-around that people have been used and advised for years (and convinced themselves it's the way to go) just due to the lack of proper support for debugging.

After the Xilinx's mark_debug experience, this technique seems very inefficient and a huge step back to the past.

preserve_for_debug is for internal signals, not outputs.

there no such limitations written in the doc, quite the opposite

"sigtodebug" is an output of a module, not an output pin, therefore it is an internal signal

I don't want to argue.  I'm just explaining how I use the features.  Virtual pins have been around in the software forever to prevent unconnected I/O from being optimized away.  Preserve for debug was only recently introduced because it was frustrating if you wanted to tap a deeply buried signal that was post-fit (as opposed to pre-synthesis directly from your RTL).  A happy side effect of doing this is it can reduce or eliminate recompiles since tapping post-fit signals uses incremental routing (aka available post-fit routing wires).

Indeed, not for debugging purpose. My signal is not an I/O pin.

If that's the way to go, I'll waste my time with manual work the tool should do.

Thanks for your help.

The scope of the verilog pragma is still unclear. I see in the documentation that my use case should work but @sstrell says otherwise.

There are lots of cases where the signals aren't preserved, either by setting the pragma in the code or using the contextual menu link in Platform Designer.

Could you confirm as an official answer that the sigtodebug in the code below should be preserved?

This code example is a perfect example to see in SignalTap some status/debug signals left unconnected.

Basically, should any signals marked as preserve_to_debug be preserved?

Either it's a bug and I'd expect a fix, or it's normal and I'll just stop using it and move to another technique to debug signals.

As a comment to Quartus's development team, the difference of the debugging feature between the Xilinx's mark_debug and Intel's preserve_for_debug/SignalTap/virtual pins, is a real pain.

I've tried to reproduce your problem on my machine. It would only be preserved if you use the sigtodebug in your design.

Maybe this is happening because it's been synthesised away.

I'll bring this up to our internal team and ask if this is intentional.