Prior to Quartus Prime Std v19, Intel used Cygwin for the Nios II Command Shell.  Version 19.1 and beyond, they switched to using Ubunto 18.04 TLS and Windows Subsystem for  Linux (WSL) to operate the Nios Command Shell.  Here's a quote from the following support article.

I've been unable to compile Platform Designer projects that use a UniPhy memory controller starting with Quartus Prime Std version 19.1 due to the errors mentioned below.  Consequently, I've had to keep the revision locked at version 18.  It is time to resolve the problem with later versions as my IP is becoming outdated.

This same issue is already mentioned (but not resolved) several times, starting with version 19 and subsequent releases.  I am currently running Quartus Prime Std 21.1.0.842.

Here’s a few of the times it is mentioned:

Here is how the error/issue shows up in Platform Designer:

I’ve deleted all prior versions of Quartus in hopes that would clear up the issue…it didn’t.

From what I read, it has never been successfully resolved.  I am VERY surprised that Intel has not taken the time to come up with a clear resolution to it.  I certainly can’t be the only one out there that is attempting to compile a Platform Designer project with a UniPhy DDR3 memory controller.

I am absolutely stuck at this point.  Any guidance would be most appreciated.

Here are some helpful links I've uncovered from others on the issue.  However, even after carefully following the instructions contained in these links, I am still having the same problem.

You can refer to below.

However, I have installed/removed/reinstalled Ubunto 18.04 and WSL while carefully following the instructions in the support article you mentioned as well as the more thorough Terasic article I mention above.

I am able to run Nios II Command Shell by itself from the Start menu.  It recognizes typed commands as expected.

I have verified that the WSL is set to version 1.

I have verified the Environment variables are pointing to the correct locations:

I am still receiving the same errors as mentioned earlier.

Is there a means to interrupt the flow to just prior to the error occurring to see what the state of the machine is at that point?

Do you mean you are able to open the link below and tried it, but it failed?

Correct.  I had already done the steps shown in the link you posted.  The Terasic article is actually more detailed than the one you posted.  Even after carefully going through all of the steps described in the articles, I am still getting the same error as originally mentioned.

I am able to successfully run Nios II Command Shell from the Start Menu (even not as an Administrator).  See below.  However, I am still getting the "Cannot find sequencer/sequencer.elf" error when attempting to compile my DDR3 Platform Designer project. 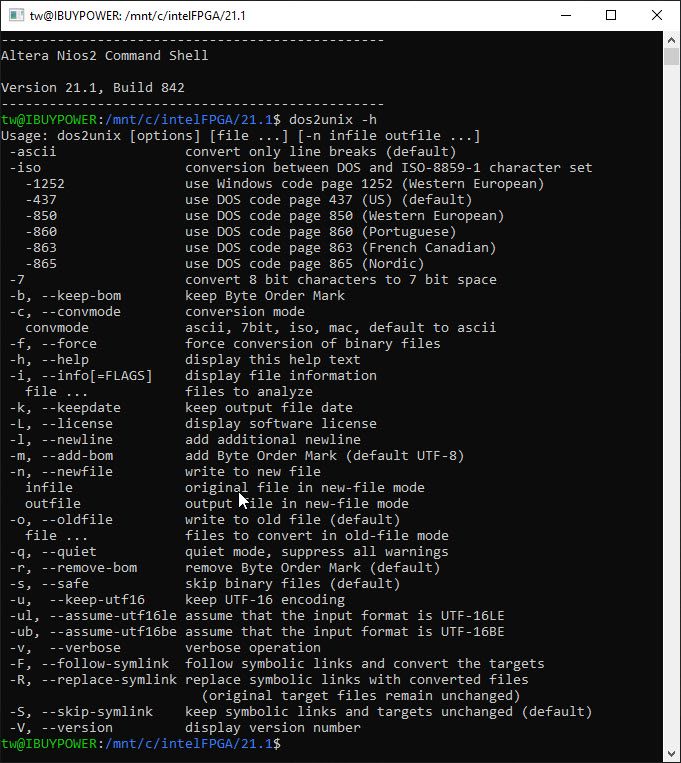 Thanks for posting this thorough problem report.

I am also running Quartus Prime Std 21.1.0.842, tries to generate a design with a DDR3 controller, and thereby get the exact same error.

I have also tried the suggestions given in this topic, which unfortunately have not fixed the problem.

A solution i greatly appreciated, since it blocks use of Quartus Prime Std 21.1 for the design.

Installation of WSL (Windows Subsystem for Linux) breaks the Quartus lite 18.1 Platform Designer so it is not possible to generate code with the DDR3 controller, even through WSL is not expected to be used for Quartus 18.1.

The error messages are similar to those given in Quartus 21.1 shown above.

When I disable WSL and restarts Windows, then the Quartus lite 18.1 Platform Designer can again generate code with the DDR3 controller.

Yes.  In my opening paragraph of this forum post I said,

Prior to Quartus Prime Std v19, Intel used Cygwin for the Nios II Command Shell.  Version 19.1 and beyond, they switched to using Ubunto 18.04 TLS and Windows Subsystem for  Linux (WSL) to operate the Nios Command Shell.  Here's a quote from the following support article.

So, prior to Quartus v19, the Platform Designer used Cygwin instead of WSL to run the Nios Shell used to generate the projects.

I had an online meeting with a couple support engineers at Intel regarding this topic.  It appears they concur this is potentially a bug and they have generated a HSD (whatever that is) and submitted to Intel Engineering for review/follow-up.  Time to watch some paint dry.

For now, I am reverting to Quartus Prime Std v18.1 so I can continue to work my project.

Sounds good that engineering will looks into this.

in my case the proplem was related to a space in the "Windows User Account Name".

I tried your proposed solution.  I also have a space in my user account name.  So I created a local name without spaces and tried re-running the project.  No joy.  Same result as before.

Intel engineering sent me a patch to try.  It didn't work either.  This is happening on two separate computers.  Both have Ubuntu 18.04 and WLS v1 installed.  Both successfully run Nios Command Shell from the Start menu.

I don't understand why this commonly reported error has not been successfully addressed for the past 3-4 years.

I think I have a similar problem:

what I see is that

I'm still using Q18 and waiting for the intel paint to dry.

I copied the text of your post and sent it to the Intel engineer that was helping me with this.  It's been a couple of months since I've heard anything from them.

Your investigation into the problem sure seems plausible to me.

I forgot to say that I'm using web/freebie versions of Quartus.

Also, Quartus compile works fine with Q19,20,21 and Windows 10. The problem is with the qsys/platform program.

Hard to believe that no Windows user has gotten these tools working.

Intel has fixed this for me, at least.
I found this post from 21-12-31:
www.intel.com/content/www/us/en/support/programmable/articles/000088789.html
Patch installed,
Q21.1 can generate now.
Case closed.

Quartus now finds the nios2eds/Nios II Command Shell.bat in /altera/21.1/ where it has been all along.

Back in the Altera days, these things were sorted in days, not months.