I have a 4 disk RAID 5, and recently, it appears one drive dropped out of the RAID.

I installed a new drive, and it's recognized, but I cannot do anything with it.

RST does not give me any option to rebuild, or repair. I was able to set the new drive 'Mark as spare' but it does nothing else, no auto rebuild, or option for manual rebuild.

I do not have a backup, as I was just about to start one on a new ext hd I bought (funds also would not allow for the longest time)

I specifically set this up as RAID 5 as it offers a great mix of capacity and security, but what's the point if I can't do anything, as is the case now? It may have well been a Striped array.

Either way, any one have any ideas as to what is going on? if it were in fact a RAID 5, I should be able to rebuild, no?

If it was actually a RAID 0, am I completely SOL?

On the report provided we noticed that this was a RAID 0 instead of a RAID 5: 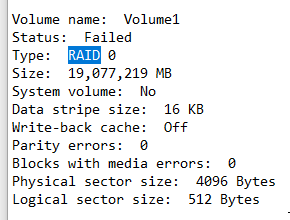 You can't recover or repair that RAID 0 because of the failed drive but you can create a new RAID 0 (or other) following the steps below:

yeah, thanks. i know how to set up a new RAID, but I cannot get into ' option ROM user interface'. doesn't matter though.

looks like i'll just haev to wipe and start over... turns out i forgot i had switched from RAID 5 to RAID 0 when i needed more space and couldn't afford more drives. I knew the risk, and here we are

We're glad to know the information helped. Hopefully, it will help other community members. Since the thread is now solved, we will proceed to close it.