ok, up until recently my NUC has been screaming fast, but now in linux (ubuntu, arch and even clear linux) the wireless is being reported incorrectly and causing issues.  this happened after the most recent bios update.   it should be reporting as an AX200 but is showing as a AC9462 which is causing some speed issues.  I have two units and both just started to show the same thing.

Any ideas on how to get it properly reporting the correct wireless again, and restore the speed.  Right now this card mismatch is causing major speed issues and making wireless nearly unusable.

DavidMcD, Thank you for posting in the Intel® Communities Support.

In reference to this scenario and just to let you know, the Intel® NUC 10 Performance kit - NUC10i7FNH was tested by Intel® using Windows* 10 - 64 bit as the validated Operating System, as you can see in the link below:

All the drivers we have available for this unit belong to Windows*:

So, we will do further research in order to try to fix this problem, in order for us to be able to that, since you mentioned the problem started after the BIOS update, we just want to check which is the current BIOS version installed in your Intel® NUC, the latest one is version 0046, if that is not the BIOS installed on the Intel® NUC please install it using the F7 method and once you get the chance, please let us know the results:

Also, what is the specific Ubuntu version installed on the Intel® NUC?

So, I assumed you would say that it was windows only and so I installed W10 20H2 and it is reporting it as AX201 properly, but the speed is still hyper slow.

Same speed issues on multiple routers, and it is ONLY the NUC units with the speed issues.  macOS, iOS, Android all are getting full speeds on the same routers.  the brand new NUC units though getting slow speeds.

DavidMcD, Thank you very much for sharing that information.

For your information, within the following link you will find other links with some Linux drivers that you can install in order to try to fix this problem:

Just to confirm, did you check or did you report this scenario to your Linux* vendor or visit the Intel® Wi-Fi Linux community page for further assistance on this matter?

Please provide the SSU report after installing the drivers so we can verify further details about your system:

Once you get the chance, please let us know the results of installing the drivers.

Hello DavidMcD, I just wanted to check if you saw the information posted previously and if you need further assistance on this matter?

Everything is 100% up to date and still hyper slow and getting worse...  I have 8 year old MBP that are getting 3X the throughput that this unit is suddenly getting.  I reinstalled windows 10 just to comply with the windows build idea and still an issue.

It is NOT a router issue, as I have tested with N only routers, AC routers, and AX routers and all are same slow speeds.  Other devices sitting 2 ft away are getting 3-4X throughput so we can rule out the router, the local internet, speedtest sites etc and it is isolated to the device.  It happens in multiple linux versions and windows versions, thus we can rule out operating system as the issue.  This only leaves a hardware issue.  Leads me to believe that that there is a core bio issue, or this device is dying less then 4 mo after bought brand new.   Really frustrated with this device.

As a note also, Bluetooth on this device is highly troublesome.  I can sometimes loose sync sitting 4ft from teh device, and it is on the desk directly not behind anything.  As teh wireless and bluetooth are on the same chipset, further points to a hardware issue.

Forgot to include teh SSU output for windows.

DavidMcD, Thank you very much for sharing those details.

not to be a jerk here, but seriously... I stated that I have reinstalled the entire operating system already, which includes the drivers.  I have installed 5 different operating systems and all teh same... teh issue follows the hardware NOT a driver.   so, if you would like me to do the EXACT same steps over and over and over and over I guess lets just close this ticket out with zero resolution.   I have laid out full steps taking operating system, driver, bios, router, local internet connection out of the equation.

We are looking into this issue and so I did some testing with an equivalent system, please see below and let me know your comments, we are more than willing to help root-cause this issue.

My test system is running BIOS v0044 and I updated it to the latest version available v0046 and I am running Windows 10 fully updated. My dedicated Internet bandwidth for testing purposes runs at 100MBPS download and 5MBPS upload, I am running no VPN and no other particular Internet/Network set up and the Wireless driver is version 21.120.0.

I tested a few of the tools that you mentioned, for instance, Speedof.me and FAST and I always get around 100MBPS for downloading. 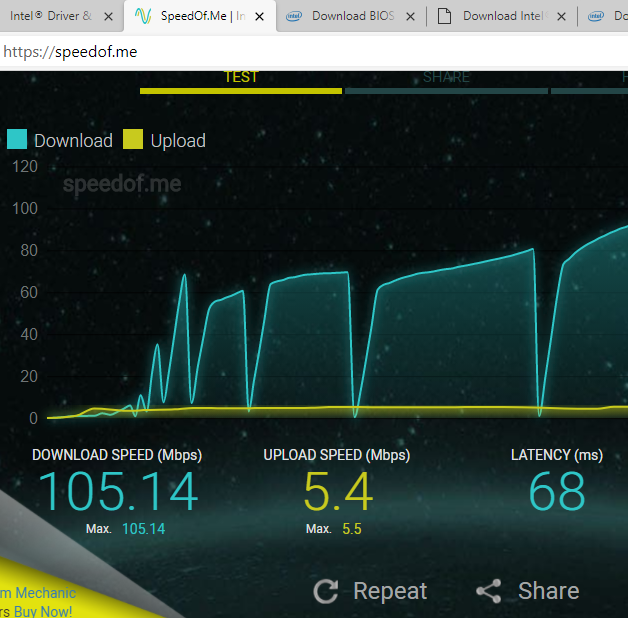 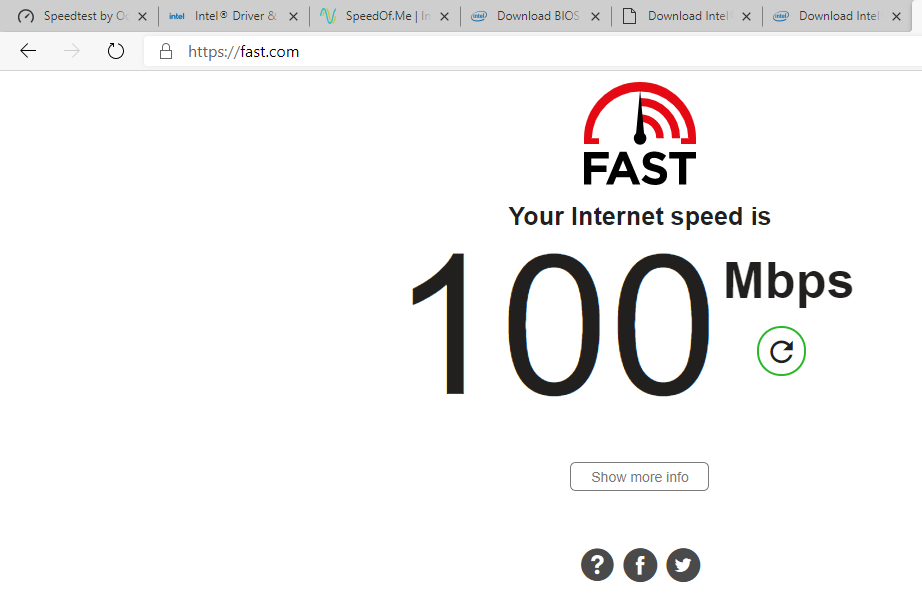 These tools that you mentioned are measuring the Internet Download and Upload Speed and not really the Wifi speed. I am not aware of a tool that measures the Wifi speed in general, if you know of any that we can try please let me know.

I would recommend some Windows related troubleshooting:

let me know your comments.

I have ordered a new Netgear Nighthawk AX6 to see if it is the TP-LINK AX1500 router I have now that is for some odd reason causing issues.

I honestly am frustrated wtih these units.  My wifi has stopped using hers as throughput has gotten so bad that she cannot sync dropbox anymore as it maxes out at 300kb traffic speed, yet browser speed is faster.  So, unless I can figure something out I may stop using these.   I have also opened a ticket to full support for a possible RMA as clearly something is wrong with these units.

Allow me a couple of days to run this issue by the Wireless team and I will get back to you.

I don't believe this is a hardware issue, I could be wrong of course but let check with peers that are much more knowledgeable in Wireless support than I am.

sure... I agree if it was one device then maybe a clear-cut hardware issue... I am at a total loss though.   Units are on a full battery backup with AVR (unit pulls from second battery) so doubtful a shock hit both at the same time.   It is odd that every operating system though is having the same issue, and Linux machines are reporting the wrong card, but windows is reporting properly.   Possibly a firmware or driver issue causing it to turn of the AX/AC mixed radio usage and only use a single radio thus causing a lot of collision and packet rebroadcasts.

After checking with the Wireless team their only additional recommendation was to check on the antennas but the antennas for this system are preinstalled and this shouldn't be a problem, in any case, can you please make sure that the 2 little antenna connectors are well seated?

Can you also let me know how many systems are affected? 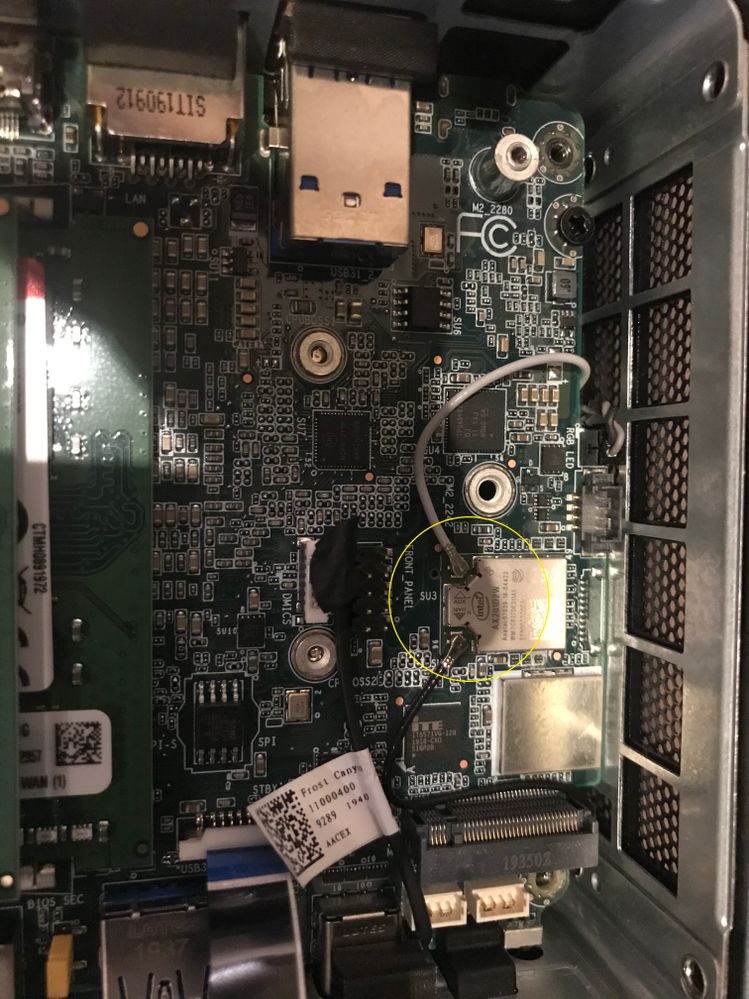 DavidMcD, Thank you very much for clarifying that information.

No problem at all, we completely understand, in that case, we will do further research on this matter, as soon as I get any updates, I will post all the details on this thread.

Hello DavidMcD, I just wanted to check if you saw the information posted previously and if you need further assistance on this matter?

Hello DavidMcD, Since I have not heard back from you, we are closing the case, but if you have any additional questions, please post them on a new thread so we can further assist you with this matter.